Tacitus made it up

Christopher B. Krebbs, author of A Most Dangerous Book, describes Cornelius Tacitus (56 AD – 117 AD) as the “the leading Roman senator” of his time and “the greatest historian in Latin literature”. Tacitus nevertheless played fast and loose with the truth when it suited him. 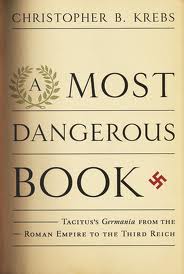 He wanted to score domestic political points in his Germania by contrasting the treachery of Roman affairs with the simplicity, integrity, courage and freedom of the Germani: “The – often only implicit – antithesis between Imperial Rome and life in Germania pervades the whole of Tacitus’ account.” Trouble was, all those fabulous sociological details about the Germani were bogus. Tacitus simply made it all up, borrowing from standard Roman stereotypes about foreigners.

One of the qualities attributed to the spurious Germani was a special kind of loyalty that “reached beyond the intimate circle of friends and family”. Almost two thousand years later members of the SS had the motto “My honour is called loyalty” – Meine Ehre heißt Treue – engraved on their belt buckles. Krebs’ faculty for establishing a connection between these two instances of loyalty, one ancient and fictitious, the other modern and only too real, shows Tacitus’ Germania to be a most dangerous book indeed. Even phoney ideas, warns Krebs, can come to “resemble viruses”.

A manuscript of the Germania was rediscovered in 1455 and published in the German language for the first time in 1473. For the next four centuries and more it was presumed to be an accurate depiction of the Roman Empire’s “The Other”:

Whether readers turned to the Germania to condemn the Germanic barbarians or to commend them as moral warriors, Tacitus’ text was widely read as a historical source on authentic Germanic life until the beginning of the twentieth century.

Not only did German-speaking scholars and pedagogues fail to identify the Germania as a fable, they often chose to overlook Tacitus’ patronizing tone. The Roman historian might have praised the strength, loyalty and purity of those who lived on the wrong side of the Rhine, but the Germani – as depicted by Tacitus – were nonetheless a simple and primitive race.

Thus, when the Archbishop of Munich and Freising, Michael von Faulhaber, made a series of sermons towards the end of 1933 chiding the Nazi regime he chose Tacitus’ Germania as his text. Von Faulhaber argued from the pulpit that whilst the ancient Germanic tribes were apparently big on hospitality and marital fidelity, this was but one part of the narrative. Such positives needed to be weighed against a penchant for human sacrifice, blood revenge, ownership of slaves, alcoholism, polytheism, and exposure of the weak and incurable. The Nazis, who revered the Germania monograph as if it were their Bible, were ipso facto barbarians. Michael von Faulhaber’s record against the National Socialists was not faultless, but Advent 1933 found him in unquestionably good form.

One of the more tedious aspects of the Germanic cult between 1800 and 1945 was all those writers and philosophers, up to and including Martin Heidegger, banging on about the soullessness of modernity and the superficiality and artifice of Western civilization, all of which contrasted with the Tacitean “rooted-ness” and “organic-ness” of an authentic life. This monomaniacal worshipping of race, tribe, blood and soil meant venerating one aspect of human nature under the banner of a false wholesomeness. It gave birth, in the first instance, to modern anti-Semitism, but then the myth of a past Germanic racial purity transmutated into an even more sinister notion.

Krebs identifies the German race researcher and eugenist Hans F K Günther (1891-1968) as a key character in what turned out to be a journey into hell. Günther, who avoided being tried by the Allies in 1945 because he was only an “intellectual”, had encouraged sociopaths such as Himmler to believe that the German volk could recover their Tacitean greatness through “Re-nordification” (Aufnordung). In other words, the production or reproduction of Nordic men and women (or Aryans) required the intervention of the German state at the expense of “the degenerate”. The Third Reich would advance triumphantly into the future by re-creating the ancient racial integrity attested to by Tacitus. Moreover, noted the Nazis, the Germani had safeguarded racial purity and nobility through their courage “to hang or drown in the marshes those who were inferior or predisposed to perversion”. In addition to avoiding punishment at the conclusion of the Second World War, Hans F K Günther remained a notorious denier of the Holocaust until his dying day.

Krebs’ A Most Dangerous Book is the work of a genuine scholar but is also concise and witty, and finishes with a wise rejoinder: “In the end the Roman historian Tacitus did not write a most dangerous book; his readers made it so.”

18C Or Not, Victimology Is Here To Stay