The Eye of the Storm

I recently reviewed a vampire movie which wasn’t very good, but no prayer goes unanswered, as I stumbled accidentally into a much better vampire movie last night.

The Eye of the Storm is the much-vaunted film – or should I say ‘cinemah’, as we are clearly dealing with the Yartz – version of Patrick White’s novel of the same name (which I have not read). However, having seen the movie, I think it should have been called The Eye of the Needle, because it illustrates a point about riches and entry into eternal life just as nicely as anything to do with storms.

The guts of it is this: selfish old Sydney rich-bitch Elizabeth (Charlotte Rampling) lies dying in her posh home in 1972, and her two adult children come and hang about and wait for it to happen. 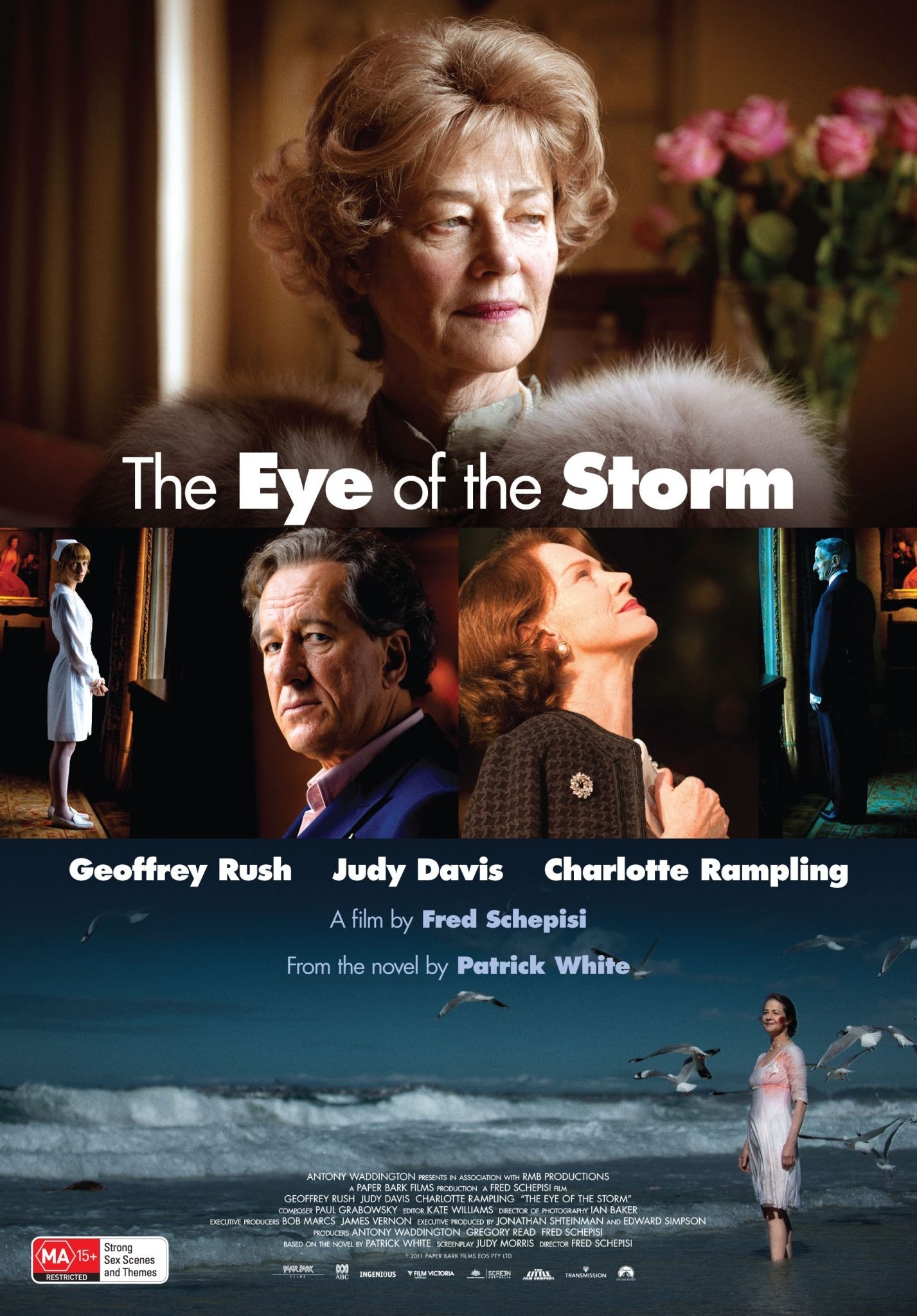 The children are the faded actor-knight Sir Basil (Geoffrey Rush) and the married-well-but-now-divorced-and-penurious Princess de Lascabanes (nee Dorothy; Judy Davis). In between demanding euthanasia and fantasising about her glamorous past, Elizabeth makes other people’s lives a misery, largely for fun and profit. In short, she is one of those tedious people who prides themselves on being ‘defiant’ and living entirely by her own standards, and we all know what a joy these people are to have in one’s life.

The performances are very good, but the one who I suspect is acting the least is Geoffrey Rush. I’m not keen on Geoffrey Rush at the best of times, principally because I have a very low luvvie threshold, which is a genetic problem and one over which I have little control. In this movie, he is very believable as a luvvie, and slightly sad as well. I think we are supposed to feel sorry for Sir Basil at the very end, because he’s had to face his own cowardice, but then I remember his ghastly snobbery at the dinner party as he victimises his vulgar new girlfriend, and I quickly think ‘Hah! Take that, you selfish old fake’, and move on.

Judy Davis is superb. She has a worried, cross little face that speaks of years of interior uncertainty and nerves, dominated by her relentless hag of a mother. At the end, though, she shows just how little she’s learnt from her mother’s ending – or rather, how little she is capable of really changing after so many years of pretending. And above all, I can never forgive her solecism in the last scene where the Princess appears comfortably sprawled on a sofa in a Parisian café, washing down perfectly good oysters – with a glass of red wine. I’m not sure if this is meant to be an ironic you-can-take-the-girl-out-of-Sydney comment, or a hint at a future career of defiance as well.

But really, it’s a cakewalk for Charlotte Rampling, the shameless old ham. Rampling is just superb: she steals every scene (and she has some pretty stiff competition from that other shameless old ham Geoffrey Rush). Elizabeth has led a life of complete selfishness, infidelity, coldness and ruthlessness, and now – reduced to her deathbed – we see the consequences of such a life, and what remains in her slowly dwindling shell of personality.

Elizabeth has poisoned the lives of dozens of people, and continues to do so as she fades away – her two nurses, and her faithful family solicitor, with whom she slept when she felt like it while patronising the living daylights out of his wife. Along the way, we learn that Elizabeth also euthanised her estranged and dying husband, and I suspect we are supposed to admire her for this ‘strength’ of character, but it comes across as just another facet of her apparently limitless selfishness.

It is her pathetic little Jewish housekeeper who hits the nail on the head, rightly identifying Elizabeth as a Nazi. Elizabeth is the will-to-power personified, right down to the euthanasia. She has thwarted and abused her children for decades, only to find that now she can no longer do so – but nor can she expect a shred of compassion from them. Women like Elizabeth aren’t strong – her pious night nurse Mary has more strength of character in her little finger than Elizabeth has shown in her entire life, and Elizabeth tacitly recognizes this by refusing to give her any jewellery and noting acidly that Mary is ‘complete’ already. Women like Elizabeth are, however, expert bullies and tyrants, which we get to see in spades in this movie.

But it’s too long. For such a tense and emotional film, it asks too much of its audience, and I suspect the extra length is because Rush and Davis were too involved in the production, and couldn’t resist the opportunity to show off for about twenty minutes longer than they needed to. Neat little prunings off almost every scene would have made this movie completely brilliant, in the way that The King’s Speech – a tightly-controlled movie if ever there was one – was completely brilliant. The audience isn’t stupid: you don’t have to spell everything out; people’s imaginations can fill in the gaps nicely.

There is one big cut I would have made: in an unbelievable sub-plot, the Princess is lusted after by a horribly Bob-Hawke-esque politician who has secretly paid for her trip to Australia and tries to get a leg over in the back of his chauffeur-driven car. The whole Hawke-esque subplot – TV appearance, cocktail party appearance, attempted leg-over – could have been excised. We already know the Princess is not the sexual adventuress her mother is, and her later attempt to vamp an old family friend would have been more poignant with this bit left out.

It’s a good morality story about the sterility of evil, and thus inversely about the fertility of love. Love is always creative and productive, but this family has had no love – its natural centre, its mother, is loveless and rotten to the core (many obvious cutaway shots of rotting fruit, etc). Sir Basil is impotent, nurse Flora fails to become pregnant with his child, Dorothy is childless, parents are hustled off to homes where they die unloved. The one moment when genuine love trembles on the verge of appearing – when Dorothy and Basil nestle together in their parents’ bed, emotionally shattered – turns out to be a mirage.

I can pay it the ultimate compliment of saying that it made me cry, but I’m not sure if the bit I cried at was the right one. Go and see it for yourself, and see what you think.

Family violence is more than a gender issue