I can’t remember if it was Alexander Woolcott or Robert Benchley who once reviewed a new play called A Good Time with the single word: ‘No’. But whoever it was, I can be slightly kinder about the recent remake of 1985 schlock horror classic Fright Night by saying, ‘Not really’.

Experiencing a bout of post-birthday blahs, I took myself off to see a good vampire movie – not one where some vampires are just misunderstood teens, but one in which the vampires are really evil, clever, predatory scary bad-asses. 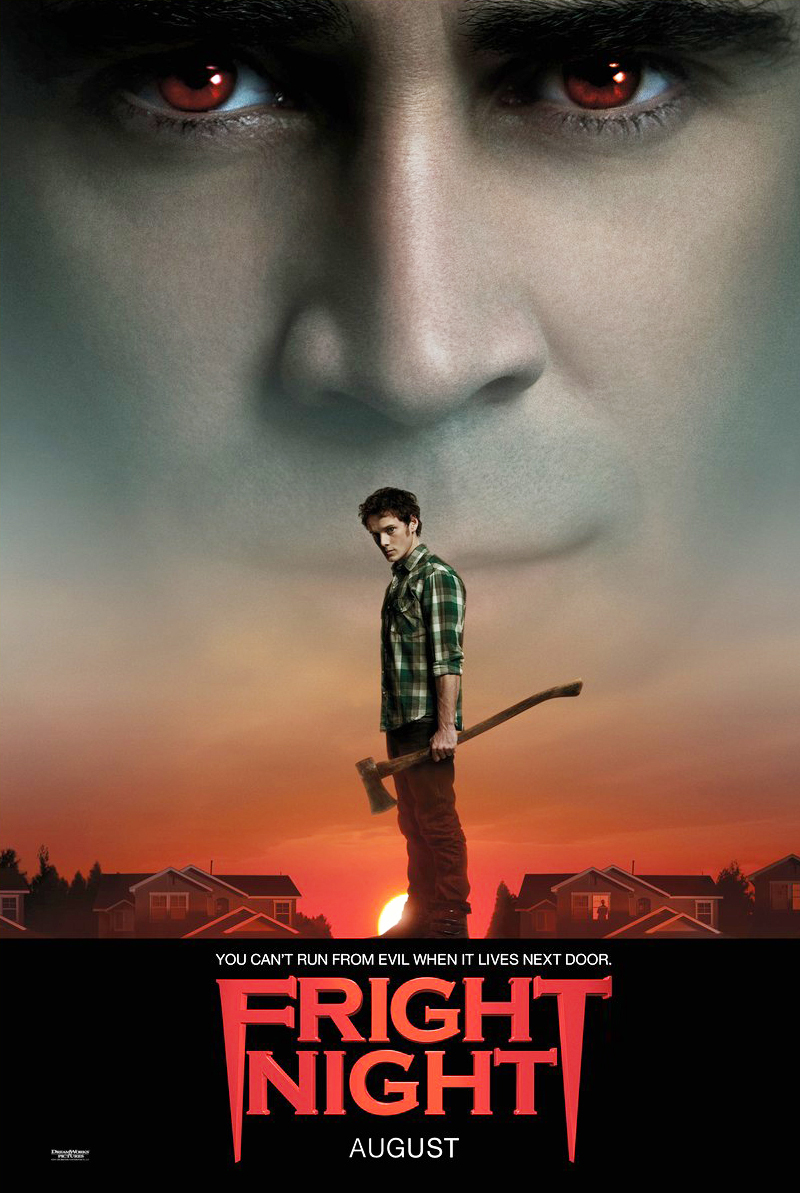 Sadly I still have yet to see a good vampire movie, because all that was available was Fright Night. So I and two complete strangers sat in the otherwise empty cinema and – well, that was it, really.

And it’s a shame, because Fright Night tries hard. It really does. There are good performances from Colin Farrell and Anton Yelchin (but yet another slim, tanned, mouthy mom from Toni Colette, whose principal acting technique in these roles is to fold her arms repeatedly). The rest of it is too uneven to be interesting. It’s also too slow and too long: you could have cut a good half hour off it and probably ended up with something quite pacy and possibly even slightly scary. Hélas, as they say on the Continent.

The vampires’ HQ, a recently vacated house next door, is genuinely creepy without the slightest hint of coffins: instead one is irresistibly reminded of Jeffrey Dahmer and that interesting Austrian chappie who kept his daughter in the cellar. Jerry projects coiled evil in the classic Robert Mitchum mode, but this means that when one finally sees his fangs, he somehow isn’t as scary as he was before. But boy, can he keep going, even after a stake through him and holy water in the face: he’s part-vampire, part-Terminator.

And it’s a nice conceit: vampires thriving in a dusty, homogenised Las Vegas suburb, surrounded by desert and inhabited by people who live largely by night. There are hints of America’s recession: several McMansions in the housing estate have simply been abandoned, which is extremely handy because (as every schoolchild knows) vampires can freely enter abandoned houses, even if they’re not invited. It’s a shame that hero Charley’s former best buddy Ed (Christopher Mintz-Plasse) didn’t know this, because he’s the first to twig to the fact that Jerry’s a vampire, and is naturally from then on a prime target.

I like Charley (Anton Yelchin). He has brown curling hair, an elfin face and a nerdy background, and manages not to get into too many clinches with his luscious blonde girlfriend before he’s unearthed a nest of groundhog-style vampires and done away with them. There are real efforts to give him an interesting and credible back story, and to provide some explanation of why the town babes find him so irresistible. It could be all those ropes of garlic he drapes over his windows, but perhaps it’s something more mundane, like aftershave.

One for the Dr Who fans: Charley is gamely assisted by Peter Vincent (David Tennant), a leather-trousered Vegas-act vampire slayer who turns out to have an interesting past. Vincent also has a Latina girlfriend who I kept thinking was Hank Azaria in drag, but thankfully she gets bitten and dies. Vincent gallantly overcomes his Midori addiction (hilarious product placement) and also finds the hero within, ending up in the cellar with the earth-dwelling vampires in a scene that bears a remarkable resemblance to Michael Jackson’s Thriller video. Thankfully there is no singing or crotch-grabbing; just a human fireball and a wooden stake blessed by St Michael, which is all that any self-respecting vampire slayer really needs.

It’s not scary. Not really, anyway. But it is in 3D, which is not enough to save it, although some of the exploding-vampire scenes are good value for money in this respect (especially if you happen to be enjoying a strawberry frozen slurpee at the same time). Generally Fright Night does best in the area of things that blow up, catch fire or crumble into dust. Other than that, I fidgeted, yawned, and was glad to go home. Wait for the DVD.

While waiting for the DVD subscribe to Quadrant magazine here…