Bolt, the judge, and the gherkin!

You can’t even do a bit of shopping these days without getting intellectually bushwhacked; and it was all over a jar of pickled gherkins that I’d bought from a Coles supermarket.

I’d just got home with the groceries and decided to have a quick snack. Halfway through the first gherkin, I looked at the label on the jar, only to discover, in microscopic print, that the pickled gherkins were Made in India. My initial annoyance was that the Coles home brand label had deceived me by hiding the “made in”, in such minute print. 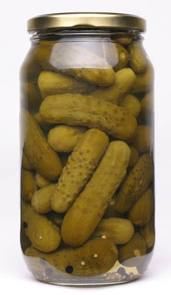 But then I got really cranky because, with a fancy Coles label, I had wrongly concluded that the gherkins had been pickled in Australia. This obviously called for a letter of complaint to Coles management.

But then, the mental screech-of-brakes! Whoa, Neddy! Would I be violating Australia’s Racial Discrimination Act?

By putting in writing any notion that I had discriminatory tendencies towards ethnic gherkins, and indeed therefore the people who grew them, picked them, pickled them and bottled them; could I end up before Judge Mordecai Bromberg? Was I the sort of person that Australia’s racial discriminations laws had been enacted, by the nation’s parliament, to root out and expose? Was I indeed a gherkin racist, or as the Left might say, a racist gherkin?

Andrew Bolt has much to answer for.

Columnist for the Australian Spectator, and former editor of Quadrant, Peter Coleman, thought that the Bromberg decision was “the greatest lawful limitation on press freedom in Australia since the 1820’s”, so, there was a clue. Write a letter to the Spectator’s “Dear Mary” for some expert advice on just how to circumvent this newly proclaimed wheel-clamp on freedom-of-expression. But, I then realised, that would actually broaden the scope of my “vilification” of an ethnic group by making my feelings public from exposure in the press.

Images flashed through my mind. Before the Federal Court—Judge Bromberg presiding. “My simple explanation, Your Honour, was that I had experienced an excruciating bout of Bombay Belly—oops, Mumbai Belly, during a stop-over at Bombay—oops, Mumbai Airport. Hence, Sir, my reluctance to eat food from India. Honestly, Your Honour, I have a curry at least once a week from our local curry house, Hari Curry, (truly, it’s named that) and I read The Times of India on the net”. I actually like Indians.

This of course wouldn’t work. According to the Act, you could be Ghandi or Mother Theresa, but under the racial discrimination laws, no Brownie-points for precious acts of kindness; and high regard for an ethnic group, doesn’t count. One slip, one complaint (or nine), you’re dead in the water.

Perhaps there might be other reasons to excuse my obvious racist guilt over a reluctance to eat gherkins from India. Do some research lad! That’s the way. A quick check on the internet revealed that most gherkins grown in India come from three states in Southern India; Karnataka, Andhra Pradesh and Tamil Nadu. At least waters from the Ganges weren’t involved.

A further check revealed that the most likely source of my gherkins was Ken Agritech, in the Indian city of Hubli. Ken is part owned by a Belgian food processing company called Jogrex. The gherkin bottle-shape and the screw-top on Ken products, pictured on their web site, were a dead give away. My immediate thought was that, well, if the company is half European and half Indian then… stop…STOP! I was getting into the awful situation that Andrew Bolt found himself in, when he started to ask questions about ethnic percentages. God! Gherkin politics can be very complicated when you actually look into it. So can freedom-of-speech issues. Ask the Federal Court of Australia.

It’s strange, how a virtually unknown judge can suddenly become a legal celebrity; almost overnight. No disrespect meant, but who had heard of Justice Bromberg, outside legal circles, prior to the Andrew Bolt trial?

This also happened to Judge John T. Raulston in the famous/infamous Scopes Monkey Trial in 1925, when John Scopes, a high school biology teacher found himself accused of violating the Butler Act of Tennessee, which made it unlawful to teach evolution. In Scopes case he had quoted in a classroom, to a group of students, from a book that made reference to Charles Darwin’s On the Origin of Species. Well, you might say, the gherkin hit the fan that day!

Prosecutor Bryan was aghast that children were being taught that humans were but only one of 35,000 types of mammal and decried the notion that human beings were descended “Not even from American monkeys, but from old world monkeys”. Mencken immediately dubbed it The Monkey Trial, a name that was repeated in newspapers around the world. The Scopes Monkey Trial was the first ever trial to be broadcast on US national radio.

The turning point at the trail was an address by Dudley Field Malone, described as the greatest speech of the proceedings, in which he defended the notion of academic freedom. Possibly the most famous quote from that speech was: “I have never learned anything from any man who agreed with me”. Scopes was found guilty and fined $100. A later appeal to the US Supreme Court overturned the conviction on a technicality. Judge John T. Raulston had erred.

Fast forward 86 years and there’s a chance that what you write or say can land you in the Australian Federal Court. Question a person’s Aboriginality and you are in trouble. And it is not only what you write, but following the Bolt judgement, you can be in bother if the judge thinks he knows what you were thinking, when you wrote what you did. Now that is spooky!

Beware of what you write and think about ethnic gherkins. It could be dangerous. And, by the way, I’ve survived the Indian gherkins, but found these fruit-jellies in Woolies that are made in Swaziland (truly). Cheers.

Triumph of the functionaries