“Saying what I think”

For its many followers The Bolt Report is the best current affairs program on Australian television. Last week John Izzard e-interviewed Andrew Bolt.

Fearlessly saying what he thinks just about sums up Andrew Bolt’s extraordinary success as Australia’s most influential multi-media person – and the ultimate symbol of that success is the Left’s hatred of him.

Being unfettered by party-political ideology, being free to express opinions on just about any topic, makes Andrew Bolt an extremely powerful figure in the intellectual workings of the nation’s mind. 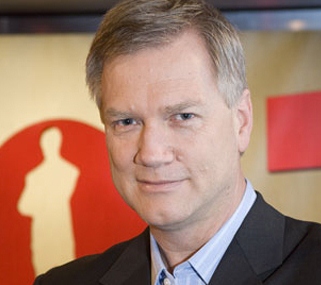 Who hasn’t heard of Andrew Bolt?

Watching him on The Bolt Report each week tempts one to think of Bolt as a media personality, but that would be completely unfair. There is nothing ‘celebrity’ about him. His achievement is in what he writes, says and presents on television; the interpretation and challenging of what elitist-progressives want to force upon us; his slant on current issues, and his guts to say what’s on his mind — that’s what makes Andrew Bolt refreshing in his Herald Sun articles, on his blog, on radio, and now on his own television show.

In an email interview conducted last week I asked him to explain how The Bolt Report started:

Lachlan Murdoch asked me, and gave me a complete free hand to design the show. What you see is what I wanted to do, which is almost like ‘the blog’ on television. I also wanted to make a non-shouty conservative show with a sense of humor, and a younger vibe.

It could probably do with another half an hour so the discussions could breathe, but the time I have is the time I’ve got. I’m not sure what Lachlan wanted, but I assume it was an alternative voice.

I realized from the start that a conventional current affairs show wouldn’t answer, not least because Labor Ministers and the Greens would never come on anyway…[I] raised instead the issues I thought important, with some footage from the week to give the current political context.

That means a more opinionated show in some ways, but at least I make my opinions explicit and don’t try to mask them.

On television Bolt represents a new style of interviewing. The program on August 7 opened with Tim Wilson from the IPA and Labor politician Belinda Neal.

I thought “God! this will be different”. And it was.

The new Belinda was bright, fresh and cheery. But more important was the respect and friendly way Bolt handled her segment and how, in a few seconds, he had made her feel quite comfortable, in a very un-Kerry O’Brien/un-Tony Jones sort of way.

In our interview he expanded on the topic of the good-manners-question I’d put to him:

I’m not a rude person and just like to have a frank and intelligent chat. It’s when people tell un-truths or recycle insulting spin that I can get cross, in a very mild way, but such people tend to run a mile from the show, anyway.

Asked about his interviewing style on The Bolt Report:

The one thing that strikes me as a kind of outsider-insider is that so many mainstream political interviews are based on a pretense. Let’s pretend the guest isn’t a friend. Let’s pretend we don’t privately discuss the truth which we’re dancing around. Lets pretend that you mean what you say. Let’s pretend I don’t have an opinion or political inclination that’s steering this interview and informing questions.

On the issue of the style and format of The Bolt Report:

Izzard: How was the format worked out? Presumably there was a great deal of pre-production planning and the tossing around of ideas.

Bolt: No, there wasn’t. I sat down with a piece of paper and then presented it to Channel 10. They seemed to like it, and made it happen.

Izzard: Did your experience from running your blog influence the format and style at all?

Bolt: In a way, yes, but since the blog reflects my preoccupations, inclinations and character, it’s probably not surprising that the TV show does, too.

To the suggestion that quite a lot of people were relying on the success of the show, the only outlet on Australian television specifically for conservative or alternative opinions, Andrew Bolt said:

I’m not sure a lot of people are relying on the show. All I can hope to do is put out shows I’m proud of, raising issues I think are important, and hope that people appreciate it. Especially people I respect.

In the meantime, I’m learning some new skills and enjoying the ability to marry pictures with words.

Comments and opinions that Andrew Bolt expresses tend to get the Left into a sizzle. Usually the outrage boils over simply because Andrew Bolt has said something, rather than a detailed look at what he has actually said. The closing of the Left’s mind so that alternative opinions are not considered but simply shredded, or ignored, is now firmly entrenched. Yet, to their considerable fury, more people are speaking out.

Even former ABC Chairman Donald McDonald took a swipe at the ABC and its culture last week, stating that the best possible argument for a public broadcaster included “high quality and [being] thoroughly representative of a wide range of views.” It is the lack of “a wide range of views” that was the killer comment.

With the stranglehold that the Left have on so much of the comment and news reporting in Australia a former Media Watch presenter got away with saying that if journalists do not come from a “soft-leftie kind of culture” they should get another job. Following the success of The Bolt Report perhaps the exact opposite just might be the case?

The Left’s media commentators and angry bloggers hoped The Bolt Report wouldn’t work and would be an embarrassing flop. It began in May and by mid-June had attracted an audience of 322,000 viewers, easily beating the ABC’s alternative program Insiders, with 264,000. It has dropped a bit since then but on the initial negative reaction to the announcement that he would do his own TV show Andrew Bolt reflected:

I’m surprised, though, that some critics assumed (before the show actually started) that I would just be screaming and ranting. They really have an odd perception of what conservatives are like.

It is curious as to why Andrew Bolt attracts so much venom from the Left. They are fascinated by him. Perhaps they are the largest part of his TV audience? Within a week of the show starting Left activists tried to kill it by starting an internet campaign to force advertisers to pull their commercials. The campaign, entitled Operation: Bolt-Cutter, now lies somewhere in the crowded graveyard of internet lost-causes.

Bolt’s first published work was written when he was aged 13. It was called Fear:

The jeering, gloating ring of youths
Closed in around a solitary boy,
Teasing and taunting him
Because he was black.
The boy staggered from a blow;
The yells grew louder,
Humiliating and bewildering
the boy.
The colour of his skin was a cause
For ridicule.
I wanted to help him
But fear sealed my mouth,
Held me back.
And soon I was yelling with the rest.

Andrew Bolt does the country a great service and, besides, what would the Left do without him? Perhaps they should be glad he hasn’t chosen another career path.

In a fine essay on Bolt by Tony Barry in the IPA Review, Bolt referred to moves that had been made to get him to enter parliament:

It was very flattering to be asked but my strength has been just to say what I think. It’s a virtue in journalism but not in politics.

It’s also what makes his blog and The Bolt Report unmissable.

Tony Barry, “The Outsider”, published in the IPA Review in January 2011. It is well worth reading.

The latest edition of The Bolt Report is here…