Has there ever been a mob in the Parliament of the Commonwealth of Australia more worthy of a make-over by the Monty Python team, than those who sit on the government benches?

I don’t want to be unkind guys, but gee whiz, casting for the Quest for the Holy Grail stopped years ago. John Cleese and the team have moved on.

Take the Minister for Hamburger Mince, Senator Ludwig. There he was having a quiet kip in the Senate when he’s donged on the head by a leg of beef dropped from an A380, flying at about 35,000 feet. Or was the A380 carrying the government report that warned him that there was a problem in Indonesia? It had certainly been circling him for about 6 months. So what does the Minister of Hamburger Mince do—well, he super-sizes the problem. He goes for a Whopper, large fries and a double chocolate thick-shake!

Let’s see, we can imagine him thinking, “How would Monty Python script this”?

Firstly, why not make the Indonesians look like complete fools. Then let’s cancel the live beef-trade without telling them. Then give them a heap of demands written in English, not Indonesian. Then sit back and watch the fun as those red-necks up North start to squeal because they’ve got thousands of mooing cows in trucks and holding pens and paddocks with no food. Then, when they are really frothing (the cattle-men, not the cows) throw a bucket of say $30,000,000 at them. Let’s call it being pro-active. A very bovine, Monty Python, solution.

Meantime, while all this is going on, and Double Mac’s are becoming as scarce as pork-satay in Djakarta, the Minister for Hamburger Mince looks stunned— completely stunned. There is little comfort for him that the government-owned ABC, who blew the whistle, knew of the problem for weeks, if not months, and didn’t fess up. So much for the ABC’s much vaunted “animal welfare” credentials. Ratings, rantings, ravings with a tad of “who, us at the ABC being sharp? Never.”

Then there is the Minister for Repairing the Rabbit-Proof Fence, Senator Bowen. His effort to extend the rabbit-proof fence, firstly to East Timor, then to Papua New Guinea, became all tangled-up because the Minister for RTRPF thought the East Timorese and the PNG-ians were a lot of silly little sausages. They weren’t. Now he’s out there with his cork-dangling bush-hat trying to stretch the bloody rabbit-proof fence up to Malaysia, and so far getting a caning for his trouble. As he pulls and tugs at the fence, boatloads of curious and amused economic immigrants, sail past.

As well as battling with the rabbit-proof fence, the Minister for the RTRPF has a problem as to where to put the economic-rabbits who have got through the fence and have taken over government enclosures on Christmas Island. Again the Monty Python solution. Why not take all those people who weren’t allowed to land in Australia, and — er, well, land them in, er, well, Australia. Brilliant. As the Minister for RTRPF knows, it’s all a matter of getting a good script — a Monty Python script. Seriously, it’s that easy.

Meanwhile, the Minister for Warming, Cooling, Floods, Sea Rises and Kid-Scaring-Stuff, Greg Combet, has his own problems. He’s got hold of a great Monty Python script, and now has made a great skit. But "ignorant" Australians, like the ones he once represented at the ACTU, aren’t buying tickets for the Carbon Show. And theatre owners aren’t getting bums on seats. The seats aren’t getting warm. In fact for the past decade there seems to be a distinct chill in the air. It’s been very cold, this winter, folks.

Minister for WCFSR and KSS, Greg, has followed all the Python rules to make his film, like don’t mention the alternate-science war. And he had a great production team, such as Bob Brown (executive producer); Rob Oakeshott (continuity and voice coach); Tony Windsor (tea-lady); Christine Milne (director) and Ross Garnaut (best boy) but the plebs don’t seem to want a bar of it. Mind you, the fact that the planet might be on the verge of cooling, hasn’t helped. And the lack of Sulphur Crested Cockatoos falling out of the sky has been a bit of a bugger — as has the rush of foreigners trying to buy up all our coal (and the government anxious to sell it), doesn’t make the Minister for WCFRS and KSS’s alarm tactics any easier. Why do those dastardly foreigners want to buy our coal? Don’t they know it’s a filthy, dirty pollutant that will turn planet Earth into blue cheese? Idiots!

While all of this has been going on, the king’s been in his counting house, counting all our money, and, being no fool, proved it. Treasurer and Minister for Pea and Thimble Tricks (and "now you see them, now you don’t", deficits), Wayne Swan had a few Monty Python tricks of his own. Out of the Carbon Sunday magician’s hat came — wait for it — 1,000,000 fewer tax-payers. Yep, 1,000,000! Great news for those who DO pay tax.

But without doubt, the highlight of the week — Monty Python-The Movie — was left to our Prime Minister, Julia Gillard. Just when you thought the greatest moral and economic challenge of our time was carbon-dioxide, 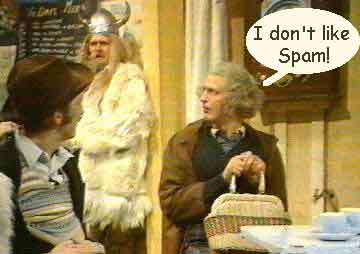 we discovered that the real problem facing our nation was … CRAP. At first, listening to Julia, I thought she was talking about Carbon Rampaging Across Planet or perhaps Caught Running A Porkie or even Canned Rudd-Abbot Pending. But no, she was talking about what newspapers and the electronic media put into their editions in the form of news and current affairs. It’s called CRAP, she said.

Well considering much of the CRAP we endure each day is the result of thousands of Labor PR person-types pumping out this CRAP, Julia’s CRAP argument all seemed a bit rich … and a bit crappy. And when you consider that the dedicated followers of her CRAP churn it out via ABC TV and Radio; the Fairfax press; Eric Beecher’s Crikey, Schwartz’s Monthly and the kids at GetUp! … and spread it around left-leaning watering holes, right across the country, you wonder what’s all this crap about CRAP? And then it becomes clear. It’s our great national newspaper … The Australian. That’s the newspaper that puts all the provincial Fairfax papers, the ABC  and the others to shame when it comes to news coverage, mixed political opinion and exposing real-world bull-crap.

Well as Carbon Week drew to a close, and the public had to try to award the best-of-show for the Monty Python Hall of Fame, Julia won hands down for her Carbon Tax/CRAP piece. But which category? It was a toss-up between the Dead Parrot Cup, the SPAM Trophy or the ‘I’m a Lumberjack and I’m O.K.’ Green Jacket Award.  I’d go for SPAM.