With a carbon price and with appropriate support for innovation, the Australian economy over the years immediately ahead will be a story of innovation, of transition towards the low-carbon economy of the future.

We can’t say now with any great precision exactly where the emissions reductions will come from.

One of the great movies on economics was the 1968 Mel Brooks movie The Producers. Economics usually isn’t one of the ‘must do’ themes that scriptwriters, producers or directors get too excited about. What with business plans, future projections, dividends, getting finance and the search for a fabulous product, economic modelling isn’t the obvious choice for drama and doesn’t fit too well with the desire to create a cinematic masterpiece. But Mel Brooks pulled it off.

The theme of The Producers was a plan to create an economic failure in the guise of an economically sound business model. 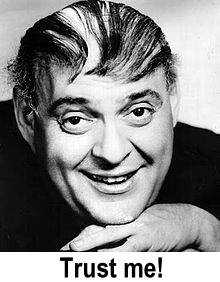 The concept was simple. Raise a big bundle of money from gullible investors on the basic of a "sure-hit play’ (yet to be selected), then choose a script that would be so bad, it would close on the opening night. In the film Zero Mostel played the part of the producer and Gene Wilder played the part of his nervous accountant. The failure of their Broadway production Springtime for Hitler meant that they could keep the investor’s money — by declaring a huge financial loss. Unfortunately for Zero and Gene, the play was a smash-hit.

The lesson from the Mel Brooks film was that the investors were gullible. They didn’t read the play, they didn’t ask the right questions, they weren’t interested in the details. With the Gillard government moving towards introducing a Carbon Dioxide Tax, it would seem natural to ask if the public, business and the intellectual elite are asking the right questions. And I’m not talking about the ‘science’, but the economics. Is this nation venturing into something that is unproven, something that is pure theory, something of say—the unknown?

If Professor Garnaut can’t say ‘with any great precision exactly where the emissions reductions will come from’ what on earth are we doing getting involved with carbon dioxide taxes and emissions trading schemes. Have we gone completely bonkers?

Just a few of the questions that could be asked by the media, business types, political professionals and the grindingly poor of our society are fairly basic, and in a fair society would be answered by the ‘producers’ of these theories, taxes and schemes. Here are just some:

What fraction of one per cent, of one degree of reduced global temperature will Australia’s CO2 tax produce?

What happens if the planned CO2 tax doesn’t make any reduction?

What are the names of the mystery 1000 companies who will be required to pay the CO2 tax?

What happens if most of the mystery 1000 companies elect to just simply pass on the tax to their customers?

Why wouldn’t smaller companies on the 1000 list, say, for instance the bottom 100, simply just reduce production, sack staff or take other measures to get off the mystery1000 list?

How many companies does the Gillard government (honestly)expect to pack-up and go off-shore?

What protection will there be to stop foreign companies, who pay no CO2 tax, from exporting to Australia, and undercutting local industries?

Is there a clearly defined objective in the form of a measurable amount of CO2 reduction in Australia— when, how and by how much?

Will there be a sunset clause in the legislation to cover the event of a failure of the CO2 tax to reach any of its objectives?

A important question, as yet unanswered, is how are Australian industries that have no possible chance of changing their use of fossil fuel, be expected to reduce their CO2 output? Airlines, for instance can’t adapt. Short of a breakthrough in rubber-band technology, gliding, or ultra-light batteries, how can they fly without fossil fuel? How do companies that produce the nations cement, which uses a vast amount of energy in production, comply? How do aluminium producers reduce their CO2 footprint? Peddle-power?

With clear evidence now available that electric cars are not an economic or environmental alternative, because of the CO2 involved in the battery production, exactly how is the problem of fuel for transportation (cars, trucks, tractors, ships) going to be solved?

One of the great tricks used by the climate-change theorists are the claims that X number of wind turbines will power so many thousand homes. Or X number of solar panels will power so many thousand homes. Unfortunately in this modern era, producing power (energy) for homes is the easy bit. What about factories, steelworks, transportation, power stations, the providers of the means of our modern lifestyle and prosperity? If the Gillard government’s plans include the reduction of the nation’s living standards, it should say so.

The underlying, unspoken objective, at least from the climate alarmists, is to reduce Western civilisation’s demand for life-improving innovations that use energy. Reducing energy use by taxes, regulations, or forcible shutdown of industry is the only way their CO2 reduction demands can ever be met. The rest is just a flummery of ideological nonsense. If the objective of the CO2 tax is to shut down transportation, electricity generation and industry, then again, the Gillard government should clearly say so.

In a wickedly scathing assessment of the proposed Gillard CO2 tax, in The Weekend Australian this week, Greg Sheridan said:

If a new federal tax of $11.6 billion represents economic reform, then the Australian political culture has changed fundamentally, and economic reform means roughly the opposite of what it meant under Bob Hawke, Paul Keating and John Howard.

He went on to say:

But there is a deeper paradox still. Garnaut’s latest report is a partisan abuse of process. It is an extremely flawed document that is misleading about the international scene. It pretends the whole world is as obsessed with reducing greenhouse gases as Garnaut himself is. The strategic object of this deception is obvious.

In Friday’s Australian, the respected and highly articulate Henry Ergas wrote on the subject of the Gillard government’s carbon policies, using the findings of the Productivity Commission’s report on the issue. Except that the Commission’s report only dealt with the electricity sector and excluded all trade-exposed models. Henry Ergas pointed out that the Productivity Commission found that ‘no country imposes an economy-wide tax on greenhouse gases or has in place an economy-wide ETS’. He said:

Yes, some countries, notably Germany and Great Britain devote substantial resources to emissions reduction. But even there, the Productivity Commission finds high costs for modest impacts, Indeed, as the report notes, the Germans spend $150 to $300 a tonne of carbon securing emissions reductions that under the European Unions ETS are simply offset by increased emissions in Italy and Spain.

Well it seems that like the Mel Brooks film, The Producers, the Australian electorate isn’t getting the full picture. We are not getting to read the final script. Putting on a Broadway style play can be a very risky business. Is Australia really going to invest in this latest Rudd/Gillard fiasco?

Islam and the Scientific Revolution