The Party seeks power entirely for its own sake. We are not interested in the good of others; we are interested solely in power. Not wealth or luxury or long life or happiness: only power, pure power. What pure power means you will understand presently.

George Orwell thought Big Brother would control society via television screens and language degradation. The internet hadn’t even been imagined when he wrote Nineteen Eighty-Four, so what on Earth would Orwell have thought of our Little Brother, Julian Assange?

The type of anarchy that Assange and his followers are prepared to unleash upon the world is under the cover of the new hero-gaining-status of whistle-blower. Assange is just the sort of thing the loony Left needs to fill the vacuum left by the declining interest in their fading hobby-horse of fear—human-induced global warming. The Left needed a new cause and the confected martyrdom of Assange and WikiLeaks is just the lift they can develop into another “movement of the people”. Really?

On the 28th of June 1914 Gavrilo Princep assassinated Arch Duke Ferdinand of Austria and his wife Sophie, Duchess of Hohenberg, in Sarajevo. The two bullets that killed Ferdinand and Sophie, resulted, one month later, with the outbreak of World War One. By the time the conflict had ended in 1918, it had claimed more than 37 million casualties — 16 million dead and 21 million wounded. It is fair to say that Gavrilo Princep and the Serbian Intelligence officers who recruited him were anarchists.

It would also be fair to describe Julian Assange, founder of Wikileaks, as an anarchist.

But just where the anarchy that Assange has unleashed will lead, is yet to unfold. To date WikiLeaks has released secret US State Department cables that have included 500 suggested targets for terrorists, gossipy reports about world leaders, and information about US informers and agents in Iraq and Afghanistan. 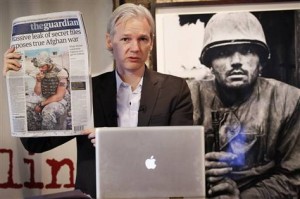 It has also released potentially dangerous (and secret) comments by US officials regarding China, Russia and the crazed regimes of Iran, Burma and North Korea. As well it has published secret details of the NATO response in the event of a Russian attack on the Baltic states. Very responsible!

The title of whistle-blower gives Julian Assange the respectability he needs to hide from the fact that he is an information-thief and an imposter. A genuine whistle-blower presumably is a person who sees or knows of some sort of ethical problem, illegal act or some form of deception affecting society in general or an individual in particular, and alerts the public. Not so Mr Assange.

Julian Assange’s stated reason for the WikiLeaks operation is to “burn the bastards”. His is not the release of a specific document or files to address a specific issue, but to attempt to slander American diplomats by releasing their confidential reports and correspondence. He is a “fence”—the receiver of stolen property—whose object is to raise money from donors, by undertaking that most sacred of Left-wing activities, anti-Americanism.

For those of us watching the Julian Assange/WikiLeaks drama unfold, the moral dilemma is appalling and the destructive aspect of it, frightening. This is the ultimate Orwellian “doublethink” — the act of simultaneously accepting as correct two mutually contradictory beliefs, often in social contexts.

Just an example of the sort of Assange-anarchy in which he and his followers are prepared to engage in is reported in the WikiLeak-sponsor, The New York Times. It reports with a sort of uncritical glee that various WikiLeak support groups have crashed computer systems of companies who have cancelled WikiLeaks business dealings. An army of hackers have brought down Mastercard.com, PayPal and Visa.com. They had also hacked into Netcraft, a British Internet monitoring company and a Dutch company Leaseweb. What a role-model!

According to The New York Times these support-groups operate “around the theory that all actions against the organisation [WikiLeaks] and against Mr Assange, including the rape accusations, are politically motivated efforts to silence those challenging authority.” These Assange supporters were also organising the recruitment of 5000 people to cyber attack Paypal to paralyse the company and to destabilize Mastercard by spreading rumours that Mastercard credit card numbers were not safe.

It is not difficult to see through the anarchy-driven objective of WikiLeaks. Destroy the diplomatic establishment as we know it, by making diplomacy a public circus. If secret cables and emails from diplomats to their foreign ministers, from any country, are going to be made public, what on earth is the purpose of diplomacy and diplomats?

Assange has spun the notion of a sort of Pollyanna-world of Truth, on the Nineteen Eighty-Four notion, whereby:

To know and not to know, to be conscious of complete truthfulness while telling carefully constructed lies, to hold simultaneously two opinions which cancelled out, knowing them to be contradictory and believing in both of them, to use logic against logic, to repudiate morality while laying claim to it, to believe that democracy was impossible and that the Party was the guardian of democracy, to forget, whatever it was necessary to forget, then to draw it back into memory again at the moment when it was needed, and then promptly to forget it again, and above all, to apply the same process to the process itself — that was the ultimate subtlety; consciously to induce unconsciousness, and then, once again, to become unconscious of the act of hypnosis you had just performed. Even to understand the word ‘doublethink’ involved the use of doublethink.

The truth of the matter is that Julian Assange is just lonely computer hacker with his eye on the main game—fame. There is nothing world-improving about what Assange is up to. Anarchy, like cyber-space, is always a place where the end results are unpredictable and uncontrollable, so anything can happen. If then, their actions cause chaos, all the better. If people get hurt, so what! Julian Assange’s world is one where he wants to be a sort of un-elected, un-accountable, Peeping-Tom-in-Chief, of no fixed address.

His digital buzz must be anticipating, as the gate-keeper of all the worlds secrets, his self-appointed status of Master of the Digital Universe — with himself deciding who sees what — the most intoxicating of all possible highs in the spooky, silent, lonely world of the hacker.

Curiously, until recently, one of the listed members of Wikileaks advisory board was ABC broadcaster and on-air personality, Philip Adams. Other supporters of Assange now include John Pilger and the film director Ken Loach. And of course, not to be left out when there’s some anti-American sludge to throw, is WikiLeak advisory board member, Noam Chomsky.

That 200 or more of Australia’s so called public intellectuals cannot see the difference between an out-of-control anarchist, and a genuine whistle-blower says plenty.

From the media-entertainment mob are the usual suspects such as Mungo MacCallum, Max Gillies, Julian Morrow, and that extra-funny man, Guy Rundle. Then there is Mary Kostakidis from the Sydney Peace Foundation. Holding up the legal side of Australian political thought, Assange will be pleased to know he has Julian Burnside QC, Greg Barns (ex Republican Movement head), Bill O’Shea (former President of the Victorian Law Soc.) and Lizzie O’Shea from Maurice Blackburn, rooting for him. Unsurprisingly, but obviously kicking himself for being out of the country (UK), Geoffrey Robertson has announced from Sydney that he will represent Assange when he returns to the UK.

As Orwell noted in his 1941 essay, The Lion and the Unicorn, “There is now no intelligentsia that is not in some sense ‘Left’.”  Orwell also noted of the Left:

To the barricades, comrades!

The Other Side of the Cronulla Riot