Peter Ryan’s memoir of his 26 years (1962 to 1988) as Director of Melbourne University Press, Final Proof, was launched on Friday night with a dinner at the Marriott in Melbourne.

About 80 friends of Quadrant and of Peter attended and made it a cheerful, collegial occasion. Nicholas Hasluck flew over from Perth, Peter Kelly from Sydney, and many others had driven in from various parts of Victoria just to be there. 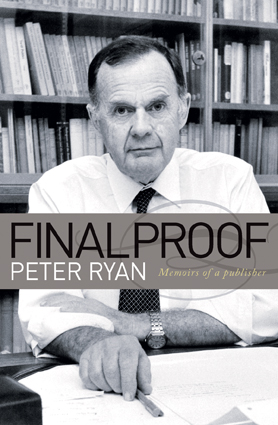 Geoffrey Blainey apologised for his late arrival. Such is his popularity among the general public that he found he had committed himself to two book launches on the same night. Spontaneous applause greeted his appearance at the doorway. After a moment to collect his thoughts he gave a gracious, affectionate speech to launch the book. He spoke of the vital role of Melbourne University Press during the decades when Australian publishing was otherwise meagre and undistinguished. He recalled the first time he came across Peter’s name – in the 1947 Victorian election, when Peter stood as a rather optimistic independent in Toorak. They met in the 1950s and the two families have remained firm friends ever since.

Peter’s response included some recollections of the responses to his famous article on Manning Clark (Quadrant, September 1993), a period he recalled with doleful wit as “my life as a leper”. A version of his speech will appear as his next monthly column (which will be his 168th since he began in March 1994) in the January-February Quadrant.

In the question time that followed, one guest asked whether the speakers thought the times were becoming more appreciative of conservative ideas. Professor Blainey said he thought the shock of the events of 9/11 had weakened the hold that Left-utopian ideas had previously had on the wider culture. Neither speaker, however, nor the MC, Keith Windschuttle, could see any signs of hope for the culture within the university humanities departments. Quadrant’s growing popularity and prosperity, however, show that the voice of the unfashionable truth continues to have a valued place in our society.

No laughing matter at the Comedy Festival