Who would have thought that it would take 130 years — but now we have done it. Australia has produced another Ned Kelly. This time the bush-ranger is in the form of the delusional Julian Assange, but in the Assange saga it is not the scrubby hinterland of northeast Victoria that the rampaging and mythmaking are taking place, but the more exotic world of Internet-land.

Julian Assange is about to become Ned Kelly Mark ll. 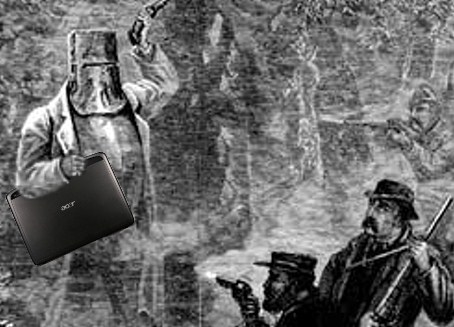 The film-scripts are being written, the film-directors are gathering, the book publishers are twitching and the TV mini-series, without doubt, is in the pipeline. My bet is that the former Spooks television star Rupert Penry-Jones, from Series 3, will take the part of Assange. And Ken Loach, who was instantly off the mark with bail money, will most likely direct. Then there will be the merchandise — tee-shirts, a Barbie-Julian, fridge magnets and WackyLeak games for the kids. And a games-show – WHERE’S JULIAN?

All the bits and pieces are there to make Assange the perfect Ned Kelly and the WikiLeaks team the perfect Kelly Gang. In the case of Assange, as with Ned, there is the guiding hand of the lone mother, the dysfunctional childhood, the hatred of authority, the “I want to make the bastards burn” underlying philosophy, and the ability to elude capture — well almost!

Poor old Ned’s first brush with the law was when he was charged with assaulting a Chinese pig farmer called Ah Fook. Ned was fourteen. Julian Assange waited until he was sixteen before joining a gang called International Subversives, and started hacking under the name of Mendax. In 1991 Australian Federal Police raided his place of abode and found evidence that he had hacked into an Australian university computer, A Canadian telecommunications company and other “secure” sites. Assange was arrested in 1992. He pleaded guilty to 24 charges of hacking and was fined $AUD 2,100.

As with Ned Kelly, Assange has become a hero to people who excuse his hacking and whistleblowing activities, yet, presumably these same people would be appalled if Assange turned his skills upon them.

The terrible thing is that so many people fail to see the moral flaws in Julian Assange’s activities and philosophy. As in the case of Ned Kelly, the fact that Kelly shot and killed three policemen, robbed banks and held hostages was totally overwhelmed by the romantic notions of his methods and theatricals. The Kelly steel-helmet and armour guaranteed hero-status and enduring myth. Enter Julian Assange.

One of the problems for anyone suggesting that what Julian Assange is up to is more than likely illegal, obnoxious and dangerous, is the shelter he hides under — the heroic and exotic title of whistle-blower.

As pointed out last week, there is a world of difference between a person who is genuinely concerned about a particular form of conduct (legal or illegal, deceptive or dangerous), and informs the relevant authorities, to advance the cause of a better society; as opposed to one, who (via Wikileaks), publishes stolen documents that neither expose corruption, illegal activities, deception or dangerous conduct.

The stolen documents of Bradley Manning that have been released by Assange are mainly diplomatic correspondence and reports. These are private diplomatic papers, which, when edited and puffed up for publication in the media make for compulsive reading, but in doing so it makes each reader an accessory, and possibly leaves them with a grubby feeling of being either a snoop or a political voyeur.

In Leo Damrosch’s book on Tocqueville, he states: “The fundamental theme of Democracy in America would be that habits and beliefs are more important than laws in sustaining liberty.” Of course “doing the right thing” and “playing the game” are both an anathema to Australia’s “progressives”. Unfortunately the Assange/Kelly mood isn’t just limited to the loony-Left. A rather well-to-do lady (who listens to Phillip Adams), told me yesterday how wonderful it was that Julian  — yes, Julian, — was releasing all these secret documents. Had she read any? “No…but we have a right to know, you know.”

The danger now is that the Assange philosophy is out and on the streets. Anyone can feel free to become an Assange. End of Secrets— End of Time! Of course one can only wonder what the media will do when the game becomes really dirty. Will The Sydney Morning Herald and The Age print stolen documents, that name their secret sources, or their plans to destroy The Australian? Will The Australian publish the personal and secret files and correspondence of Rupert Murdoch? What if some idiot decides to leak to WikiLeak the nuclear-launch codes of Russia, China or the USA? What if a comment on the North Korean dictatorship, in a confidential US diplomatic report, is the final trigger for the lunatic Kim regime to attack the South?

There is an expression in the business world which goes, “If it is not illegal, its possible”. Fortunately most businesses don’t follow this philosophy. WikiLeaks does. Many will have noticed that Julian Assange cocks-his-snoot at the actual good behaviour that most western societies follow in their daily law-abiding activities. But Assange is the first to squawk when he is in trouble, and screams about, and demands, his legal rights.

Reason and clear thought is now lost in the judgements that many people are making about the “service” Assange is providing. The battle appears to be lost. Congratulations to Phil’ip Adams, Geoffrey Robertson, John Pilger, Ken Loach and the world-media and all who sail in her. You have your new Ned Kelly. Every Tom, Dick and Julian will now want to become one.

Enjoy this Humpty-Dumpty moment! The egg cannot be unscrambled!