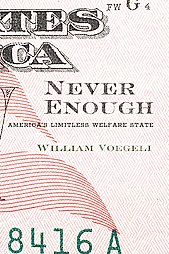 Voegeli went looking for the principle that would let governments become aware that welfare expenditure had reached its natural needed limit and was astonished to find that from a liberal (ie leftist) perspective there is no principled upper limit on the level of public spending. As he puts it, “liberals remain frustrated, believing – chronically, it seems – that the welfare state America should have is always bigger than the one it does have”. “Every problem deserves a program” is a recipe for an unending growth of government and the problem is not just found in America.

And if your taste in reading is even darker, along the same lines was the spookiest book I read last year, James Burnham’s 1964 classic, Suicide of the West: an Essay on the Meaning and Destiny of Liberalism. It is the possibility of finding books like this that make second hand book shops the haven that they are. There is a pleasure in reading authors for whom our present day was their future. The accuracy with which Burnham saw his future and our present is striking and depressing.

Of Bread and Circuses