By far the best book I read this year was The Uses of Pessimism by Roger Scruton, one of those rare books that one finishes truly enlightened. 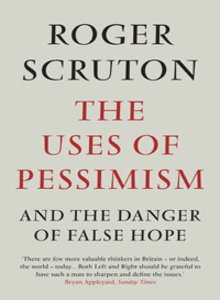 In his matchless prose Scruton explains, among other things, why so many sane and well-meaning people believe such poisonous things and react so hatefully towards those who express opposing ideas. Yet from a man who has been on the receiving end of such hatred for thirty years it is a calm and hate-free exposition.

The best recent novel (if I can count something from 2002 that I have just discovered) was Spies by Michael Frayn, a poignant mystery set in the outer suburbs of London in wartime, and the best fictional account I have read of the gap between the understanding of children and that of adults, and the potential consequences of that gap.

It was an honour and a pleasure to help Peter Ryan prepare two books, Final Proof (the memoir of his directorship of Melbourne University Press in its heyday) and It Strikes Me (his selection of the best of his Quadrant columns since 1994), for publication by Quadrant Books. Others will derive similar pleasure from them.

The politics of happiness

Family violence is more than a gender issue