Paul Kengor, Dupes. ISI Books, 2010. Kengor documents how Western leftists of all stripes have been duped and used by Communists for nearly a century. 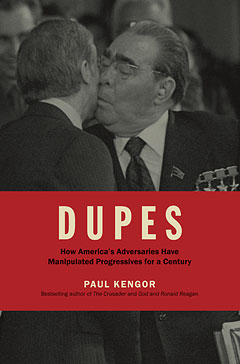 Benjamin Wiker, 10 Books Every Conservative Should Read. Regnery, 2010. Time-honoured conservative writings are here profiled, with authors ranging from Aristotle to Chesterton, and Shakespeare to Hayek.

Jay Richards, Money, Greed, and God. HarperOne, 2009. Contrary to the claims of the religious left, a solid biblical case can be made for the free market.

Andrew McCarthy, The Grand Jihad. Encounter Books, 2010. Careful documentation of how Islamists and Western leftists are working together to undermine America and the West.

S.E. Cupp, Losing Our Religion. Threshold Editions. Cupp is an atheist, but she sees clearly that Christian freedoms are being whittled away in America.

Mary Eberstadt, The Loser Letters. Ignatius, 2010. Writing in the spirit of The Screwtape Letters by C.S. Lewis, the Hoover Institution Fellow here takes on Dawkins, Hitchens, and the New Atheism.

The Love That Won’t Shut Up