Australian Conservative on this week’s left book on the 2010 election:

Gillard struggling to gain the stature and authority of her office, Cassidy says 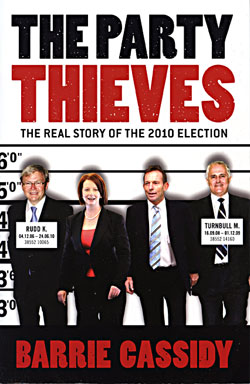 Julia Gillard is “struggling to gain stature and the feel of being prime minister because she came to the job in unorthodox circumstances – through a leadership challenge”, Barrie Cassidy told ABC radio today.

"The problem for Julia Gillard is that the [election] campaign, even putting the leaks to one side, a lot of mistakes were made and some of them she has to take direct responsibility for. She has to take responsibility for a lot of what happened too with the climate change back-down and the core of the problem – that Kevin Rudd ruled alone because he now chooses his own ministry. That was Julia Gillard’s idea. She put that up and Kevin Rudd adopted it. So she’s got her own problems, and even now she’s struggling to gain stature … She’s still struggling for that authority that she really needs as prime minister.

"At the moment she’s getting lots of ticks for being a great negotiator. She put together the minority government. She deals well with the independents. But that’s about it. She needs something else."

That assumes, of course, that the prime minister has the capacity for something more. Her record is extremely thin. Even when she switched from puppet Julia to the real Julia mid-campaign, nothing really changed.

A Closer Look at Those Pell Redactions

AFI AWARDS: The Nite of Nites