If you feel up to the challenge, go and have a look at the ABC’s At The Movies website and read the comments on The Waiting City.

It’s unusual, I think, to find opinion so polarized about a film in this way. Some respondents have praised the visual beauties and moving story, but others have panned it as a typical example of Australian mediocrity, full of characters in whom no one was actually very interested, dumped in a token and stereotyped Indian setting to render it more palatable.

I went to see it the other night, and my two cents’ worth is that The Waiting City is a very good movie – and I mean good in a moral sense, not just its aesthetic. It is visually beautiful; director Claire McCarthy makes full use of the vivid palette of colours, sights (and smells) of Calcutta. But it’s more than that, and it’s clearly disturbed some viewers and made them uncomfortable in ways that they are not prepared to acknowledge just yet.

I think it is a mistake to see this as just a story about an Australian couple (played by Radha Mitchell and Joel Edgerton) who want to adopt an Indian baby. 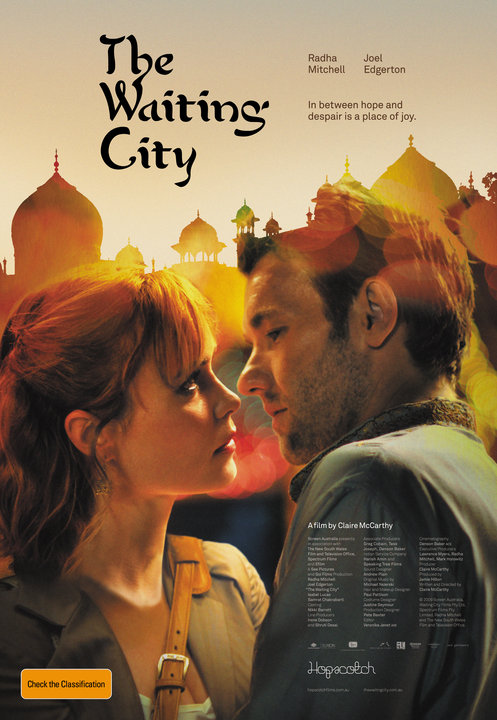 If you do, then you will certainly see the central characters as two-dimensional and the story contrived, and you will be bitterly disappointed. But it’s not a documentary; it’s a morality play and a parable, and its characters are caught up in a drama which extends well beyond them and their petty, pampered and irritable lives. In fact, the drama into which the facile and foolish Fiona and Ben stumble is one which is genuinely transcendental, mystical and metaphysical.

The film is partly about Ben and Fiona’s growing understanding that there are forces around them that they do not understand, and that they cannot control. In short, we are brought face to face with the least popular element in modern film today, and that is the G-word. But before you switch off completely, the G-word is developed in this film mostly through the vehicle of Hinduism. This is a very shrewd move of McCarthy’s, who clearly understands that while her audience will swallow practically anything with multiple arms and a dot on its forehead, trying to use Christian imagery will cause immediate alienation and grinding of teeth.

Fiona, a control-freak successful lawyer (is there any other kind?) and her depressive, medicated, former in-patient, ex-successful-musician husband Ben (ditto), are off to India to adopt a little girl, Lakshmi. Either they were not previously told by the adoption agency that the little girl is chronically unwell, or they are very forgiving when they find this out, because this turns out to be the case. I won’t spoil the outcome for you, but in the process Fiona and Ben face some fairly enormous and potentially destructive truths about their marriage, and their ideas about each other.

On one level, it’s also a story about true love, and the very real dangers with which any true love has to contend. A continuing theme in the movie is the loss of the other: Fiona and Ben are constantly being separated from each other in crowds and exposed to danger, only to be somehow flung back together again, gasping. An additional temptation comes snaking across Ben’s path in the form of his old acquaintance Scarlett: free-spirited, promiscuous, young, gorgeous, hippyish, druggy, musical, with precisely one facial expression and tone of voice, and not too much clothing. (She is played by Isabel Lucas, who was in the Transformers sequel as the babe at college who nearly gets Sam into the sack, but turns out to be a freaky hybrid robot monster of some sort. Is this typecasting, or what?)

I think it’s a film well worth seeing, and I don’t often say that about Australian films. But it is confronting, and it would be easy for a certain type of female to get snarly and insist that this film glorifies the punishment of modern women who are just expressing their right to autonomy. But I suggest you don’t take someone like that with you when you go and see it, because you won’t get as much out of it if you do. Instead, go with someone who knows something about either Hinduism or old-fashioned Catholicism, and then get them to explain this movie to you afterwards.

Hell and Other Destinations

Sympathy for a Strangler