The conscious and intelligent manipulation of the organized habits and opinions of the masses is an important element in democratic society. Those who manipulate this unseen mechanism of society constitute an invisible government which is the true ruling power of our country.

We are governed, our minds are molded, our tastes formed, our ideas suggested, largely by men we have never heard of.

The above words are by the “father of propaganda and spin”, Edward Bernays and are taken from his book 1928 book, Propaganda. 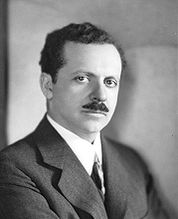 Bernays was the nephew of Sigmund Freud and carried his uncle’s theories of the subconscious into the world of commerce and politics. Indeed modern politics hardly functions without a dab of Bernays sauce.

So as the nation braces itself for the first female led Federal election and the shape of the political landscape, post Kevin Rudd (and the changes in style), it is comforting to know that the life-forms known as PROPAGANDA and SPIN live on.

In the past two weeks government ministers have been slowly emerging into the light of day like winter crocuses, pushing through the cold, hard Canberra soil. Suddenly we have Tony Burke talking about population levels while Martin Ferguson has located his voice and is talking about mining taxes and Chris Evans is banging on about border protection —a.k.a. illegal immigration. Standing in the background, behind Kevin Rudd, seems to be a “think” of the past. The only crocus missing from the lawn is Wayne Swan.

Border protection, like some mid-day TV serial, appears to have a life of its own as it is twisted and turned by Julia Gillard from the Christmas Island Solution, to the East Timor Solution to the New Guinea Solution — and no doubt they are working on the Antarctic Solution, as this is being written.

But our political masters are not the only ones that have mastered the black arts of Edward Bernays. The media have been dedicated followers of his Machiavellian theories and perhaps none more so than the ABC’s 7.30 Report. Take Emma Alberici’s story on the Royal Expenses broadcast on the 7th of July. It was propaganda, straight from the prayer book of the Republic Movement.

After an introduction by Kerry O’Brien, highlighting Britain’s sovereign debt and the expected massive spending cuts of between 25% and 40%, he then tied in the issue with costs of running the Royal Household. He finished with “… many in the UK are now demanding more information about how the Palace spends it’s money.” Fair enough! Except the presentation that followed …well… wasn’t exactly fair enough.

As the story cut to Emma Alberici in London, the vision was of the State Coach carrying the Queen and the Duke of Edinburgh making their way to the grand opening of Parliament. Running under the vision was the voice of Alberici stating that:

She’s been at the heart of British life for close on six decades and as head of state this year, like every other, the Queen took her place in the House of Lords to set out the Government agenda.”

The vision then cut to the interior of the House of Lords with the Queen saying:

My government’s legislative program will be based upon the principles of freedom, fairness and responsibility. The first priority is to reduce the deficit and restore economic growth. Action will be taken to accelerate the reduction of the structural budget deficit.

Alberici’s voice then came in over the Queen’s speech saying:

For some Britons it was jarring to hear those words coming from a woman wearing 3,000 diamonds and jewels worth more than a quarter of a billion dollars. Even more so when she later asked the British taxpayers to give her a pay rise.

The vision then cut to a few (about a dozen) protestors all carrying the same banner saying “No if, no buts. We want Royal cuts.” All in the tedious “what do we want” … “we want it now”, moronic vein.

For republicans, both here and in Britain this would have been music to their ears — but it also might have given a smile to the cold dead face of Edward Bernays. Why?

Well the propaganda element in this opening section on the Alberici piece was jaw-dropping. The skillfully crafted opening by Kerry O’Brien , combining budget cuts with the Palace budget worked a treat. But the bit about “many are demanding more information about how the Palace spends its money”— ? A careful reading of the London newspapers revealed only the usual suspects who have been bleating on about the cost of Royalty for half a century.

The impression that Alberici gave; “…a woman wearing 3,000 diamonds and jewels worth a quarter of a billion dollars.” Nice propaganda piece but as Emma would know the Crown Jewels are owned by the British people and not kept in the Queen’s closet, but in the Tower of London. 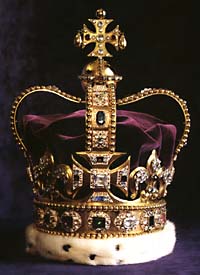 They are used for State occasions, not for personal gratification. Compared to the billions that Queen Julia has wasted on the Building the Education Revolution, the cost of a once a year ceremony seems to pale a bit. And unlike the BER money, the people still own the jewels.

Alberici then interviewed Graham Smith a Republican protestor, who said; “It’s the most expensive head of state in Europe to the tune of millions of pounds.”

Amazingly Alberici then stated; “The Queen now costs 62 pence per person in the UK”. Wow!

Alberici went on to tell us that the cost to the British taxpayer was $AUD 69 million. “That money was spent on official functions, salaries for the Queen’s 1200 staff, travel and property maintenance.”

The Alberici piece managed to drag in a whinging reporter from the London Independent, as well as a token nasty Labour MP, but only “balanced” the story with a rather ineffective former Palace press secretary.

Of course what the story didn’t state was that the increased budget requested by the Queen was also for repairs to the various Royal buildings that are in a dire state. These are buildings that attract millions of visitors to the UK and apart from the revenue generated for British business and tourist industries, are part and parcel of British heritage. It is the reality show that is Britain.

Also Emma Alberici failed to note that the payments to the Royal household budget are the result of agreements made when property and treasure were handed over to the government, and British people, in exchange for the annual Royal upkeep.

Last year Prince Charles attended over 700 official engagements on behalf of the British government and the British people. The queen herself managed to entertain over 48,000 people from Britain, the Commonwealth and foreign countries. She is patron or president of some 700 organizations.

Emma Alberici’s report was a shabby bit of Republican propaganda. Picking on an 84 year old lady was not a good look. But it stuck to Bernays’ rules of engagement.

Bernays called this sort of thing “engineering of consent”. It was just part of the never-ending campaign of resentment and envy that is at the heart of the Republican Movement.

Coalition of the Craven