It’s a Paris mid-summer afternoon, the windows are open all up and down our street, the occasional sleepy bumble bee or fly blundering in then out again into the heavy air. Music wafts in and out of hearing from people’s flats—and a heavy drum-beat from the dance studio across the road, whose windows have over the months provided many entertaining vignettes of Paris life through dance, from sedate ballroom-dancing couples to high-octane hip-hop dancers, from little girls in pink tutus to salsa hip-swingers. In the tightly-packed streets, once it gets cooler in the evening, skeins of families, couples and groups of friends will be out walking; down by the Seine, there will be the usual evening’s entertainment of the ‘penguin rookeries,’ as we’ve dubbed them—clustered groups of young Parisians picnicking and drinking by the water, stared at by the other big rookeries that are the tourists perched on the decks and balconies of the bateaux-mouches that ply slowly up and down the Seine. Last night there was a tightly-packed single file of them going down the river, clicking away at the buildings, the penguin rookeries, and the pedestrian ‘badauds’ or stickybeaks, like us, watching it all from the bridges, while the bike-riding tourist groups, shepherded by brisk Lycraed guides, stop obediently for a look too.

It’s become part of our Paris ritual, the walk after dinner, in the long summer twilight, watching the many vignettes and scenes unfolding before us. It’s becoming more poignant now as our departure date approaches—we leave in late July—and we think about how it was at the beginning, when we arrived on a snowy winter’s morning with the city draped in chilly grandeur, the trees skeletal not luxuriant, the Seine cold and murky-brown not greenly sparkling, almost inviting, like now.

Back then we’d noticed all the SDF (Sans Domicile Fixe, or homeless) people clustered around this area, and wondered how they managed to survive the cold and discomfort. The SDF are still there, but now, over the months, it’s plain that just as amongst the rest of the population, things change with the warmer months. For instance, we saw practically no women amongst the homeless in the winter; now, in summer, a couple of older women have taken up raucous, ragged perches by the shops in the Rue St-Antoine, near the church. You see the occasional young couple too—they look different to the other SDFs , are only there for a short time and we surmise they are travellers who either can’t or won’t pay even for a hostel. There are also occasionally other blow-ins, like the Scottish SDF in a kilt who sang loudly to himself and did impromptu dances while waving bottles, or the guy with haunted eyes who would suddenly step in front of you and start addressing someone just over your shoulder in a confrontational tone. These you see one week, two, three; then they move on to other places. 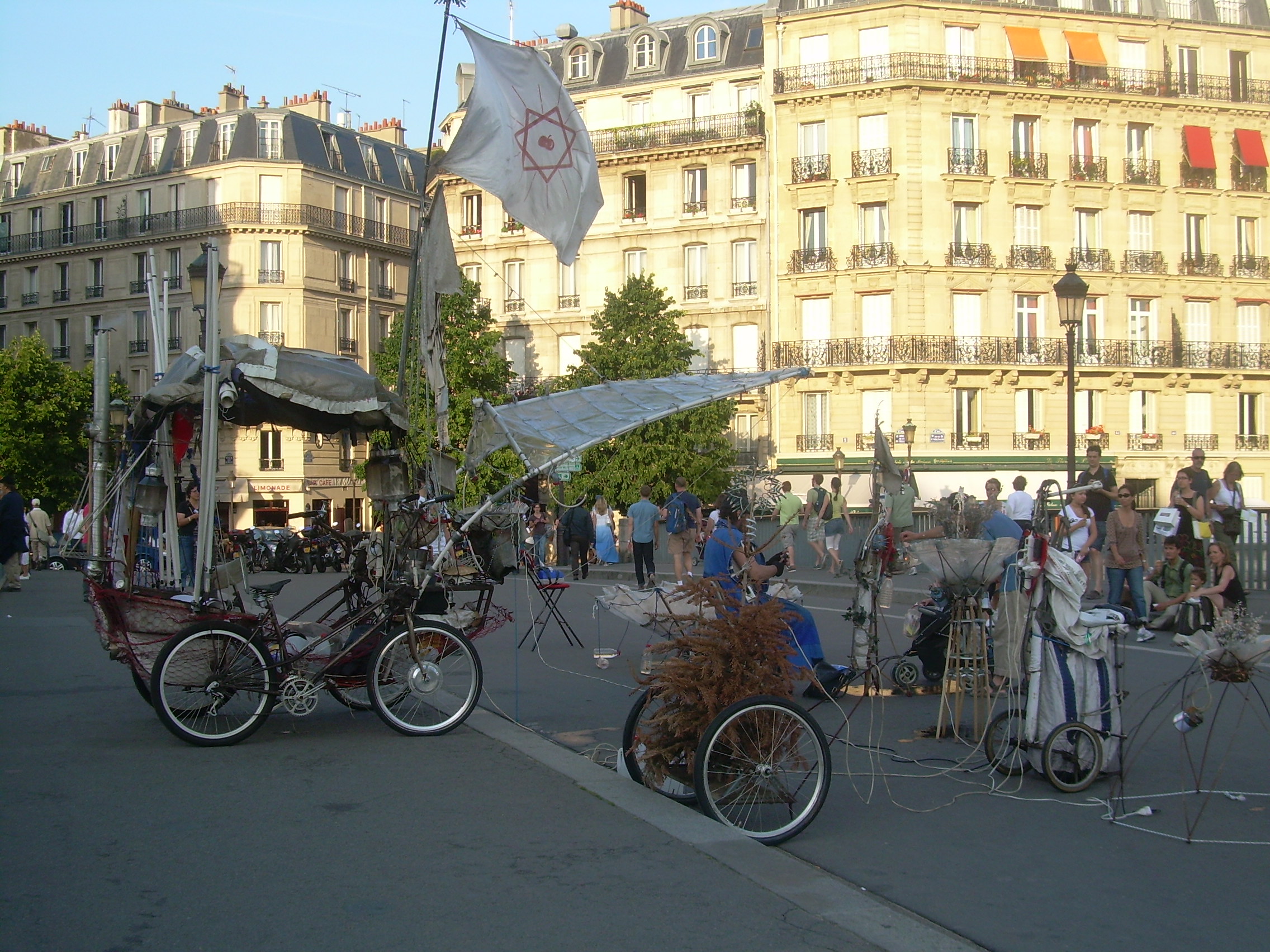 But the die-hards who were there at the beginning are still there—spending their nights on the Cité des Arts verandah with dirty sleeping-bags, wads of cardboard and piles of bottles (and sleeping in on Sunday morning, just like all other citizens!) and their days hanging around of the corner of Rue St Antoine, near the Franprix supermarket. They’re real locals, and like all Parisians, clearly attached to their neighbourhood. (The local shopkeepers know them too, and I’ve seen foil containers of food handed over by the local restaurants and cafes.) Over the months, we’ve become familiar with some of them, particularly one young blond, bearded and spectacled man who summer and winter wears a shabby beanie and who seems much more sociable than the rest, always ready to chew fat with the locals who pass by and stop to talk to him about the weather, or the football or politics, or whatever..

The other guys are much shyer, don’t usually catch people’s eyes, and a couple are frankly away with the fairies; but none of them ever beg–occasionally someone gives them some money but it’s not expected; this is simply their daytime spot and they watch the world go by in their neighbourhood. They never talk with or associate with the gypsy touts and various beggars whose daytime haunt this is too (you never see them on the street at night or in the early morning), and apart from Blond Beard, they don’t engage with the non-SDF population, but are lost in their own world. You can only guess at their life stories, as to what has brought them to this pass—and only guess too, at the enigma of Blond Beard, whose natural manner with all sorts of people and obvious love of chat don’t give him the usual sad SDF profile. He never appears drunk during the day; only at night, when he disappears to the verandah with the others..

It’s a big issue, in Paris, the issue of housing—the lack of it, particularly for people in as they delicately put it here, ‘situations de precarite’–i.e., poor. Though rents are not, by Sydney standards, particularly high (700 Euros a month, or about AU $1000 a month, is average), there is a real shortage of rental housing in central Paris—i.e., the 20 arrondissements within the peripherique) This is partly of course because this is an old city and new apartments simply can’t be built—unlike in surrounding suburbs, which are not of course a favoured place to live for many people. (There are also logements sociaux—State housing—as well in central Paris but of course the queue for them is very very long.)

The dearth of private rental housing though is also there partly because in France the rental market is tilted very much to the tenant, with their rights very closely protected. It’s great when a tenant is good and reliable, because they can’t just be chucked out unceremoniously as is too often the case in other countries; but not good at all when tenants are unreliable—you can still eventually get rid of them, but eventually is the operative word. And so many places simply stay empty as the owners sit on their property waiting for real estate prices to rise so they can sell.

There’s always a lot of polemics around the whole situation, of course. Some people think that landlords should be forced to make empty spaces available—in recent years, there have been famous squatters’ camps in such iconic places as a huge apartment in the Place des Vosges, left empty and going to rack and ruin because its owner was in a nursing home and no-one knew what to do with the place. In true French style, combining pragmatism, effrontery and polemics, an organisation was set up as an alternative ‘Ministry of Housing’, which points out to people places which are standing empty and helps them into them.

The other evening, on the Passerelle St Louis, near Notre Dame, we saw yet another way of ‘dealing’ with this very same thing. This was the way of a guy calling himself the ‘Artisan Poete’. In his blue tunic, wild beard and beanie and his plethora of weird, oddly beautiful, home-made machines—a bicycle made out like a kind of bizarre cross between a carriage and wheeled ship, with a prow and banners flying; a bubble machine made of bits of wire and rice paper, a little fountain ditto, this amiable, energetic character looked like a cross between an alchemist/inventor out of a steampunk novel and a character from a Hayao Miyazaki animated film. But this wasn’t some kind of self-conscious street theatre—though there was a great deal of artistry in his quaint contraptions. He wasn’t doing this for entertainment; he was on a crusade—a crusade for housing, as became clear from the quaintly worded, often incoherent, handwritten and photocopied manifesto he handed out, complete with an ‘Appel au Peuple’ and a new, bizarre version of the Marseillaise. The whole feeling of an updated 18th century pamphlet was very strong. And in good French style, despite rejecting the ‘enslavement’ of bureaucracy’, he proudly proclaimed his own self-awarded ‘official’ credentials: with his own official seal (featuring a French flag made of his own fingerprints dipped in red and blue—leaving a space for the white!), and his ‘permanent offices’; where he appeared every week—every 14th of the month at Place de la Nation, every Friday night Notre Dame. Everyone was invited to join him in a ‘civil revolution’, not with violence, but to ‘free themselves from slavery.’ Don’t get me wrong; this wasn’t a ‘Green Left weekly’ style call to arms; this was a deeply personal crusade, but in good French egotistical style, he was making the personal very much into the political. But a political which was itself very personal, quixotic. 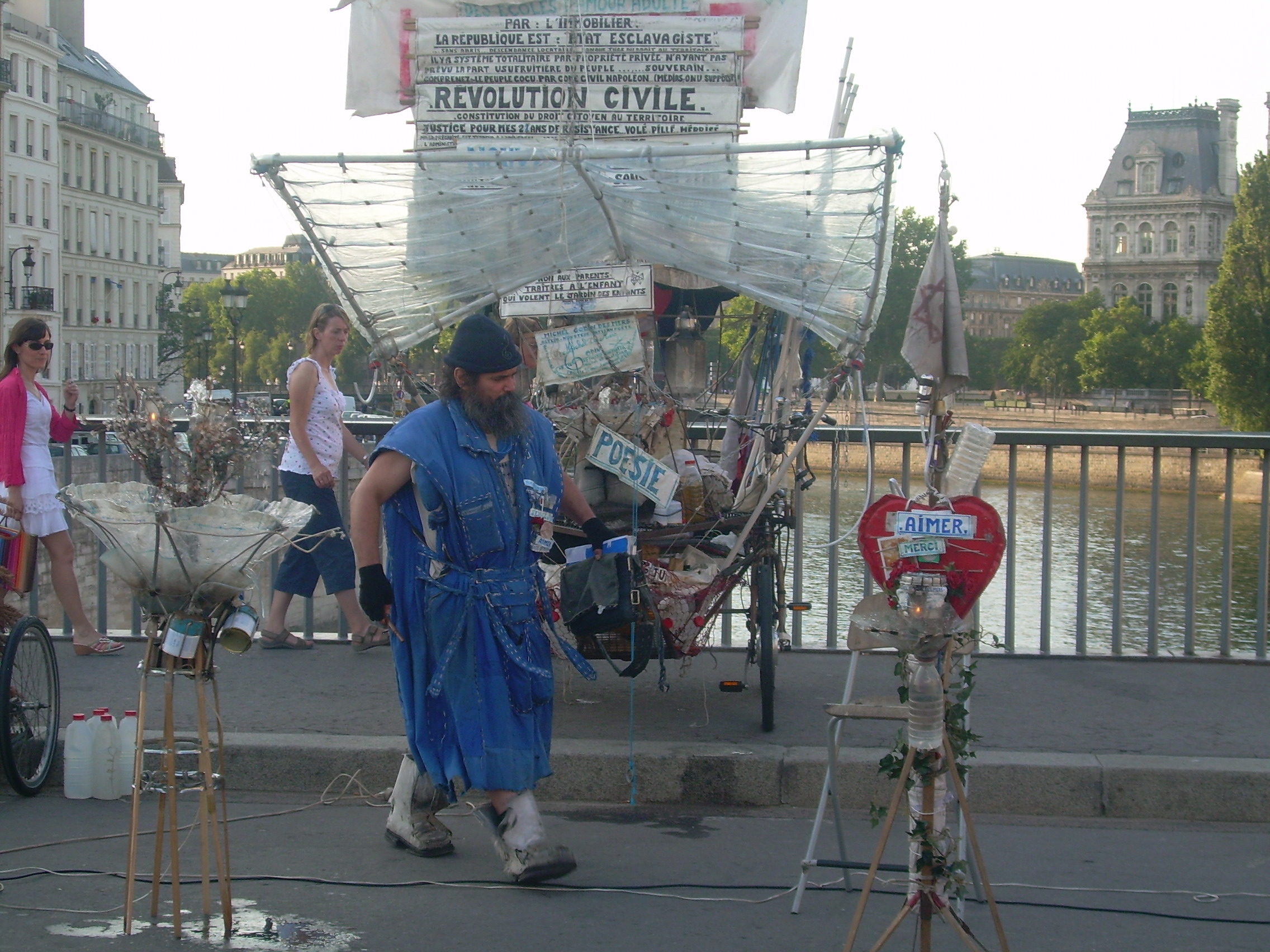 Basically it appeared that he’d only ever been able to rent out places sometimes, and kept moving from place to place, because of ‘intermittent earnings’. But this wasn’t just a revolt against not only a revolt against the established order, but deeper than that, much deeper than that, he expressed the desire that is the dearest to French hearts—the need to call something your own, the hunger for housing, for ownership of your own little patch. (He talked of it as the ‘inborn right to property’ and suggested that renters be given ‘credits’ so that they could own their own thing eventually). The ‘artisan poete’s’ way of expressing it might be quixotic and hopelessly naive, but in a wider context the issues it raises have huge resonance in France. After all, the French Revolution enshrined private property as ‘everyone’s inalienable right’. It’s something that both peasant and bourgeois France agrees on. There have been bloody village feuds over tiny bits of land, ‘easements’ between properties; and equally, in the cities, the polemics over the access to property and housing waxes fierce. And for good reason; Paris appears to have a large SDF, or homeless population, as we’d noticed from our very first time here; and many others are in temporary housing, constantly having to move. The ‘artisan poete’ with his quixotic crusade had simply transformed a gnawing anxiety, a constant worry into a quaintly entertaining attempt at revolution—thereby perhaps given him a focus and meaning in life which kept him out of the cheap wine shelf of the supermarket and the verandah of the Cité des Arts.

The Dirt On Overland’s Poetry Editor