Having not seen the original Karate Kid, I was willing to give this remake a try. I now actually want to see the original movie, because apparently it looks like Shakespeare compared to this one.

I can’t really put my finger on what annoyed me, because it’s a combination of little things. The first and most annoying is Jaden Smith as Dre (pronounced ‘Dray’) Parker, who throughout this film sports adorable little Afro braids, and with his small stature and piping voice, looks and acts remarkably like a little girl. 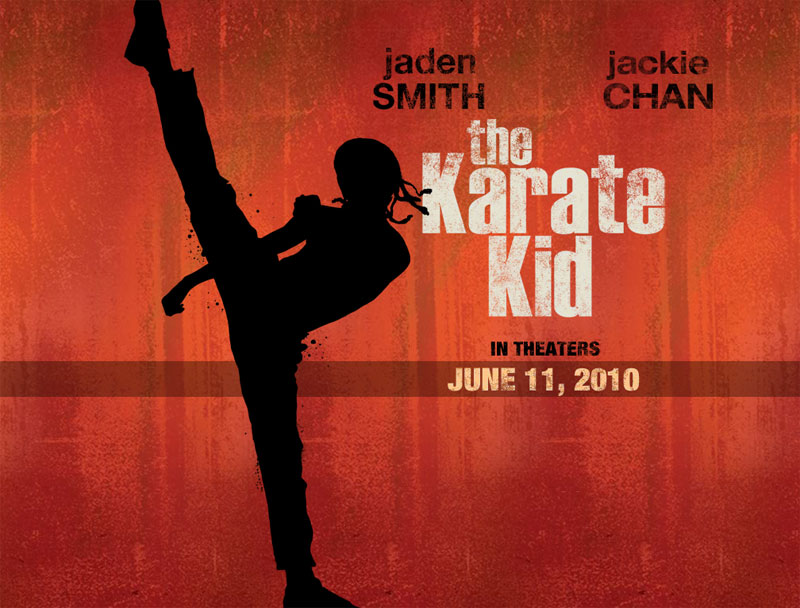 That would have made a much more interesting movie, but sadly Helen Garner was not at the word processor when this script was written, so instead we have The Karate Kid as it stands.

The plot, such as it is, has been given a New China workover, for which Jackie Chan has sadly become an apologist. African American Sherry Parker (Taraji P. Henson), a widowed auto factory worker, decides to ‘transfer’ to Beijing for reasons which are absolutely beyond me, as is the nature of her daily work in the factory. She says to her son at one stage, ‘There was nothing left for us in Detroit’, apparently oblivious to the existence of the remaining United States of America. But no, China has much more to offer a lone African-American woman who speaks almost no Chinese. Very on-message.

And how she loves it! Everyone is so nice! The electricity isn’t on all the time, but that’s to save the planet! Even the ice-cream tastes nicer in Beijing! And this is the one point in the movie when Dre and I are as one: he screams at his mother that he is sick to death of all her raving about the wonders of their new home. Amen to that, kid. (Still, at least it’s reassuring to know that despite her being the only African American woman in the city, there is a place just down the road where she can have her hair relaxed). Downtown Beijing, where they live in what must be by Chinese standards a very swank apartment, looks like New York used to look in the 1970s. If you remember the camera panning over colourful slums in the opening credits of TV shows like Welcome Back, Kotter and Good Times, you will get the picture – only without the graffiti.

Little Dre has been sent to school where he is savagely bullied by the horrid Cheng and his chums, all of whom train at a local hard-line karate school run by the sinister Master Li, who has dyed black hair and a mean face. Li teaches the boys the principle of ‘No mercy’, and I wait for an explanation from him about how modern China practises this virtue with its ethnic minorities. None is forthcoming. Dre is desperately irritating on an almost daily basis, but doesn’t seem to realise why he’s being picked on. The script would have us believe it’s because of his puppy love for Mei Ying (Wenwen Han), the bony and awkward violin-genius female love interest. (Another thing I really don’t like in movies is children kissing each other. This boy is supposed to be twelve; he looks more like eight, while she looks like an underfed fourteen. Euw.)

Dre befriends the nice old drunk apartment block caretaker Mr Han (Jackie Chan), who is a home-taught karate expert with a tragic past. He trains the little pest for a big tournament, and at one stage takes him on a long train journey to the distant Chinese province of Kung Fu. Actually, I’m making that up, but as soon as we saw the shamans sitting in a row on the waterfall, I knew we weren’t in Kansas any more. There, a troupe of inexplicable mystic-monk-priestly types, male and female, strike bizarre attitudes and practice the higher forms of self-defence, and there is even a Dragon Well at the top of a mountain with sacred powers attached thereof. All good stuff, and a heck of a lot more interesting than endless camera angles of Mao and suspiciously shiny big buildings.

Anyway, the tournament comes round, and the kid goes out there a brat and comes back a star (despite massive injuries) and the ghastly Cheng is satisfyingly humiliated, as is the equally horrid Master Li, and everyone lives happily ever after to a chorus of ‘The East is Red’. Actually, I’m making that bit up as well, but you get the general idea.

It’s not even the kind of movie where you could park the kids for a couple of hours (as I did last week with The A-Team, and collected two very happy 12 year olds at the end of it). The fighting is very exciting, of course, but there are long stretches of PC annoyingness which would reduce even the most recreation-starved young boy to tears. Also, I would feel obliged to engage in deprogramming on the way home on the Chinese-human-rights-abuses front, so all in all it wouldn’t be much fun for anyone. If I were you, I’d wait for the DVD.

The Contradictions of the Choirboy

May Day in Paradise