The business of government

Our children and their children may well look back at the one term Rudd government with shock and awe. It will be seen as a time of courageous government forays into business. Three approaches are distinguishable in government policy. These can be characterised as “Betting the Farm”, “Placing a bet on someone else’s farm” and “Encouraging others to bet their farms”. A rough totalling up of risk exposure is $130 billion. This risk is distributed in different ways but ultimately it comes to rest on the shoulders of the taxpayers. In terms of exotic, if not quixotic policy, the Rudd government pushes the Whitlam years into second place.

Let us examine each approach with an example.

The National Broadband Network is the outstanding example of this. There may be others in the Defence area but the NBN illustrates the problems. First, best estimates put the return on an investment of $30 to $40 billion at a little above the return on long term government bonds. This is of course the famous risk free rate. But nothing about this investment is risk free. The government has picked a technology that it assumes will dominate all others (thus of course ruining some other farms). Governments do not have a distinguished record in picking technology winners. There is no knowing what new applications will attract consumers and move customers. It is not obvious that every household needs or wants the fastest available connection if it is much more expensive than a service that is satisfactory. Yet new houses are being required by law to be “fibre ready”. Perhaps the Rudd government wants to cable every home for extended focus group polling or it is following the pioneering work from the University of Oxford where the election of the Professor of Poetry is being conducted over the internet.

Placing a bet on someone else’s farm

The “super profits tax” is the outstanding example of this approach. It is reckoned that some $150 billion of planned investment was being discussed before the government announced the new tax. If the government were to take a 40% interest in the proposed investments then it notionally has to outlay $60 billion as its share of the investment. However it is not going to do this but rather make good any losses allowing for a risk free return of the ten year government bond rate. In financial accounting this is a contingent liability or risk that may or may not crystallise into a real loss. The approach of having an economic super tax is fraught with presentational problems. Mineral deposits are only of value when there is a use and a market for them and when technology enables the extraction of the minerals from whatever is their host. Uranium ore-bodies were worthless until nuclear physicists understood fission and Einstein the connection of energy and mass. The discovery of Roxby Downs, a completely hidden deposit, is as much a triumph of ideas and knowledge of those who found it as it is a property of South Australia. Alternatively should not a pharmaceutical company with 90% margins on its drugs pay a super tax on the land it occupies? After all there is a land tax.

The great achievement of this rather than the first approach is that the government is investing alongside someone who ought to know what they are doing. This is a comfort but the risk remains as markets can change.

Encouraging others to bet their farms

Encouraging others to bet their farms is the most insidious of the three approaches as the government has by regulation made a market for a product that is not supportable under normal market conditions. For the generation of electricity the government has set a target of 20% sourced from renewables by 2020. This has encouraged investors to finance wind farms and industry superannuation funds to build their own while the consumer pays directly for more expensive electricity. Other renewable sources are promoted but none are in government terms “shovel ready”.

This approach again suffers from the delusion that governments can pick technological winners. In this case you are forbidden to mention nuclear power which on present estimates of cost per unit of power generated matches or is better than a wind farm. However a factor of ten times the amount of capital is needed to finance a 1,000 to 2,000 MW nuclear power plant compared to financing the 50 to 200 MW capacity of most wind farms. 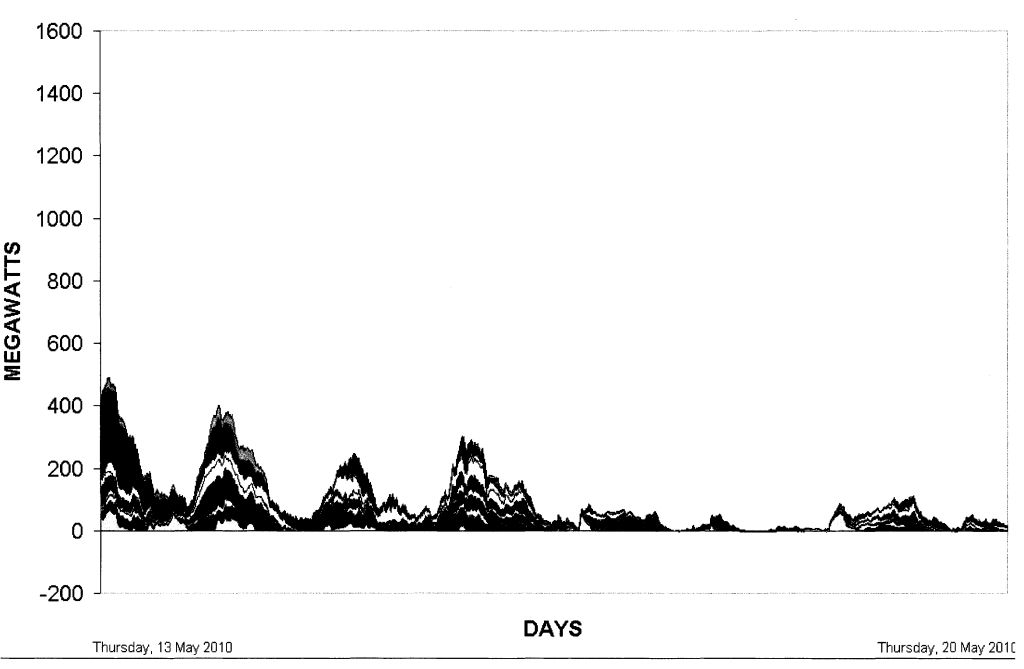 The total contribution of 18 wind farms spread across South East Australia from South Australia, New South Wales, Victoria and Tasmania. The total capacity of the wind farms is about 1600 MW. Daily demand as measured by the AEMO was between 20,000 and 30,000 MW. Source Andrew Miskelly

What has not been addressed by advocates of this technology is the practical difficultly of what to do when the wind is not blowing. As a recent example above shows, there can be times when there will be no wind no matter how well dispersed the farms may be in South Eastern Australia. So extra transmission lines and back up gas turbine generators all add up to an extra $30 billion spend. The ability of a network to handle large fluctuations in the sources of supply as well as the vagaries of demand remains to be proven but overseas experience is not encouraging.

This approach is arguably the worst as it may well be a misdirection of private funds chasing projects that rest on government regulation. There are assured sales as market managers must take the expensive wind power ahead of all other sources. But if wind supply moves towards the 20% renewable target then supply management may upset this picture by limiting sales from wind farms.

This is only a small extract from the catalogue of Rudd government initiatives. There are Pink Bats, Fabricating the Education Revolution, the Green Car Fund and others. The government is channelling Groucho Marx who said “I have learned from my mistakes. Now I can repeat them perfectly”.

Christopher Koch and the enmity of the uncreative