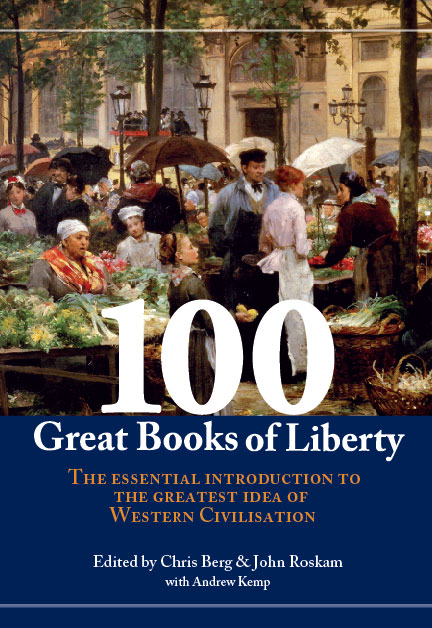 100 Great Books of Liberty: The Essential Introduction to the Greatest Idea of Western Civilisation, edited by Chris Berg and John Roskam, with Andrew Kemp (Connor Court) was reviewed for Quadrant Online by Merv Bendle:

Unfortunately, there are problems with this worthy project, as the great diversity of the [texts] illustrates. While there can be no doubt that such works have contributed to the development of Western Civilization, this does not mean that they are all primarily about liberty or liberalism, or that they have especially promoted the growth of such ideals.

Bendle’s review is less about the book we have produced, and more about what book he would have preferred we produce … we’re not just trying to draw up an arid list of “approved” books. We’re trying to explore every facet of liberty and Western Civilisation in an accessible and engaging way.

I set out to discuss their book while also developing an argument about the nature, history, and present situation of liberal thought. My emphasis was on the need to fully expound and drive home the fundamental principles upon which liberty and liberalism are based … To their great credit, they have successfully produced their book, while I am lamenting the absence of one that more precisely meets my criteria.

Both writers have different ideas about which titles should find a place in a selection of books dealing with “Liberty”.

The Australian Conservative website has opened their pages to a discussion of what books readers consider should be included.

What titles would you select?

Would Recollections of a Bleeding Heart by Don Watson and A Clockwork Orange by Anthony Burgess be on your list of Great Books of Liberty?

The discussion is here…

A Closer Look at Those Pell Redactions

Commentary on NCCET statement on ivermectin