The Men Who Stare at Goats

I last saw George Clooney in the shamefully unfunny Burn After Reading – a movie which should have been burnt before releasing – so it was with some trepidation that I approached The Men Who Stare At Goats. As far as I’m concerned, Clooney has utterly redeemed himself in this; he’s as deadpan as ever, but this time he’s actually very funny. 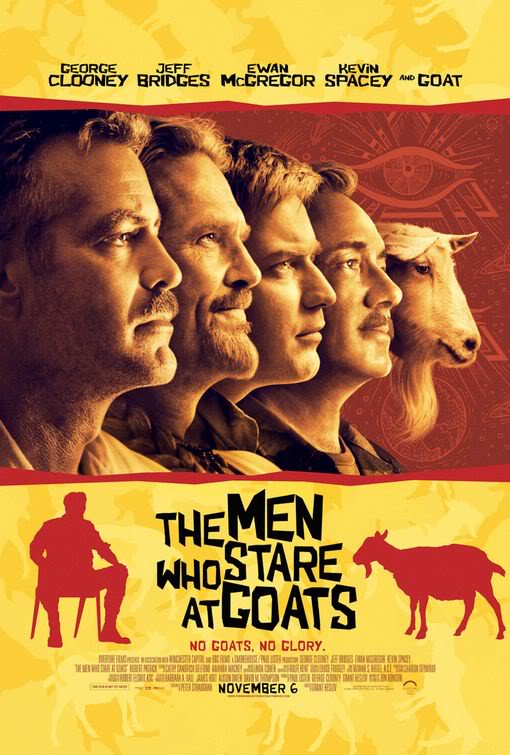 The Men Who Stare at Goats is a laugh-out-loud movie, especially if you’re feeling indulgent. It’s not terribly well-made: the story is uneven, the ending is lame, and the performances from a surprisingly good cast – including Jeff Bridges, Ewan McGregor and Kevin Spacey – are nothing to write home about. It’s really only two or three neurons away from a stoner movie, but what makes it enjoyable is that this movie is utterly unpretentious. It doesn’t take itself seriously at all, and this too is a pleasant change from movies which have stupid plots and mediocre acting but take themselves very seriously indeed (cf Avatar).

The story is based on Jon Ronson’s book of the same name, and purports to tell the story of secret US Army psychic experimentation and training. With this movie, you don’t have to believe a word of it if you don’t want to, or you can swallow the whole thing; the choice is yours. It is also just possible that in the screen version, there is meant to be some heavy moral or potent analogy at work, involving peace, war, Iraq and torture, but I seriously doubt it.

Lyn Cassady, Clooney’s character, is a delight – a doe-eyed psychic whose patient and solitary pursuit of his destiny helps to give a paper-thin premise depth and credibility. Jeff Bridges is also an utter joy as Army shaman and ruined old hippy Bill Django, but it’s hard to avoid the uncomfortable feeling that he’s simply playing himself. Kevin Spacey, unusually, doesn’t seem to know what he’s doing in this movie. In fact, it looks like he shot all his scenes in one day in between two more interesting projects which were absorbing his attention.

If there is a little place in your heart for bombastic rock anthems of the 1970s, or you like rapid-fire sight gags and slapstick, then this movie will certainly get a cackle out of you. You could go and see it on the big screen if you felt like it, but you would not suffer any major psychological trauma if you waited for the DVD.

Which Part of Me is Aboriginal?

The Asylum Seeker from Central Casting

The Case for Seizing Liddell