If God had not intended for us to eat animals, how come He made them out of meat? – Sarah Palin

Alaska’s most famous woman is 100% New World. She speaks to small-town Americans, not against them. And she isn’t afraid to voice her opinions. Or to quote Aristotle (as she does), “Criticism is something we can avoid by saying nothing, doing nothing, being nothing.”

Oh. And you can add real to my list. The key argument of Palin’s best-selling book shows this: “Let’s debate ideas. Let’s argue about legislation and policy. Let’s talk about political philosophy. But leave my children alone.”

Alas the antique media didn’t play fair in 2008. And today, campaigning journalists are livid at the famous Alaskan’s post-election achievements, as her book sales smash new records. Palin, you see, is a pro-life conservative. She’s Christian. And attacking her children backfired. I can imagine them with their claws out: And now she’s a New York Times bestseller? I thought we destroyed her. 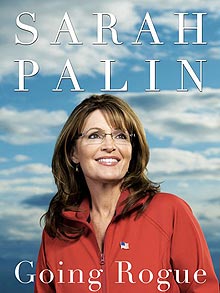 The best remedy against elitism (of course) is realism – being you. And that infuriates campaigning journalists. They hate Palin’s memoir Going Rogue: An American Life because she doesn’t care for their politically correct niceties, their pretend peaceniks, or even Hollywood’s penchant for wearing look-at-me red ribbons. One judge even mocked Palin for bringing her disabled child on stage. Apparently, useless eaters must be aborted, or left unseen and unheard of in public. Only Obama, Biden, Gore, and the happy-family Clintons can travel with their media-endorsed children.

When VP-candidate Palin failed to answer one of Katie Couric’s questions, a pretend panic ensued. Then again another famous man refused to answer some questions. But that’s the problem. When, Obama as President fails to answer questions, America’s submissive media ritually bows. They see him as Jesus. Kevin Rudd – as Prime Minister – is also lovingly excused for offering to get back to Channel Seven with answers.

What is a New World woman? Why are the chattering classes so offended by her conservative convictions? Palin slices open fish bellies, and scrapes out eggs. “For many in Alaska, being ‘green’ isn’t about wearing Birkenstocks and driving a hybrid; it’s about survival,” she asserts, without fear.

And accusations concerning her inexperience are based on media-created myths. Just a plain mum? Just a mayor? “Managing a $14 billion budget as chief executive of the largest state in the union with thousands of employees is more complex than managing a city like Wasilla, and certainly weightier than managing a household of seven,” she explains to her dumbfounded accusers.

Going Rogue gives us Palin, the whistleblower, the conqueror, the don’t-try-to-shut-me-up woman, with hot high-heels. While the Obama-first media’s agenda is well documented, this book tells us more about the subtle anti-conservative/libertarian tricks, campaigning reporters like to use. To pick one example: “Reporters from across the nation camped out at the end of our driveway in Wasilla and on the ice in front of our home,” writes Palin, to physically intimidate, my guess.

On the other hand, Obama’s controversial mansion was sacred ground, and there were no mainstream reporters camping outside. There were no hostile political operatives barraging Obama’s neighbours, or even his doctor. And no one, to my knowledge, was bugging his attorney. Indeed, if Obama experienced one tenth of the pressure Palin was under, he’d be on free market meds.

And yet, Palin while acknowledging her attackers and their tactics is more interested in standing up for the rights of others. Her early life in Alaska is what shaped her, made her strong, different. And what Palin is about is the obliteration of government-serving leftwing speech codes and Hollywood’s narcissistic anti-hunting crowd.

What’s more she’s very funny. So when Palin writes that God made animals out of meat, it reminds me of Germaine Greer’s arguments against  censorship-hungry vegans, before The Whole Woman book came out, with the slab of meat on the cover. “Well, vegans are made out of meat,” I recall her saying.

One animal rights group recruited a perky, pretty celebrity to attack our scientifically controlled, state-managed wolf-control program. It was ironic that she opposed using guns to kill predators that would cause Native people to starve, but apparently not opposed to taking movie roles in which she’d use guns to kill predatory people.

Her husband is a Yupik Eskimo.

The unfolding story of Sarah Palin reminds one of how strong the New World’s women are. Their independent spirits, their charming accents, their sometimes wild but well-meaning children, their simplified but deep lives – they’re walking advertisements for good health. And practical conservatism.

While there’s nothing wrong with appearing on chat shows like Oprah or speaking to women’s magazines, I respect the fact that Palin is more interested in going rogue, than doing Vogue.

Aid and Comfort for the Enemy

Two Cheers for Freedom of Speech

Living in the occupied territories