Munching in the Blue Zones

In 2008, The Blue Zones: Lessons for Living Longer from the People Who’ve Lived the Longest  by Dan Buettner introduced readers to four extraordinary communities. It was one of the most profound diet/health/fitness books of the last decade.

Living the good life well into your 90s – and your 100s for some – appears easier in the Blue Zones: Sardinia, Italy; Loma Linda, California; Okinawa, Japan; and the Nicoya Peninsula, Costa Rica. 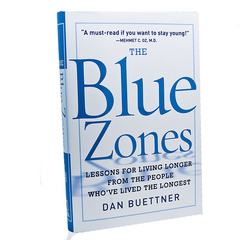 But that’s not to suggest that there’s some magic pill to take. Or even a positive-positive course for only ten thousand dollars. (Conditions apply!)

Interestingly, there’s a correlation between faith and longevity. Of particular interest though, in my view, is the fact that three of the four Blue Zones were heavily influenced by time-honoured Judeo-Christian values.

Remarkably, all of the faiths stress an old-fashioned respect for elders, and are relatively conservative. And if I understand correctly, they’re living years longer without banana-and-condom-first educators.

One mistake that many people make is to wait for the perfect diet to come along. And from veganism (a bean-centric faith) to Atkins (a meat-first lifestyle) there are plenty to choose from.

What struck me about the people living in the Blue Zones, however, is that they are eclectic eaters. I must admit to laughing at Okinawa’s penchant for kitsch SPAM-and-vegetable stir-fry meals, a popular dish.

In Sardinia, whole-grain breads, goat’s milk, vegetables (particularly beans), grass-fed sheep cheeses (pecorino), sounded like real foods. Local red wines and meats were also on the menu, albeit in moderation. In some parts of the island, mastic oil was very popular.

In Costa Rica’s Blue Zone, “Panchita” a representative eater, “was ready for her midmorning break. She’d been up since four and had already knelt next to her bed to say her morning prayers, fetched two eggs from the chicken coop, ground corn by hand, brewed coffee from well water…made herself a breakfast of beans, eggs, and tortillas…”

Over there, exotic-sounding fruits like anona, which looks like a misshapen pear and wild ginger, are common, but so are easy-to-buy-here oranges. Pork fat. Papaya. Squash. Pineapples. Greens. Garlic. Bananas. A Butchered cow. Many of the “Foods for Life” were hardly expensive, and I also imagined Panchita, a devout Catholic, drinking communion wine.

In the American Blue Zone, the long-lived Seven-day Adventists (a vegetarian-majority group), didn’t drink alcoholic beverages (unlike some longer-lived wine cultures). However, I suspect that they were unknowingly receiving small amounts of alcohol, in light of their penchant for fruit-based treats. And unlike, other extreme forms of vegetarianism, many of the denomination’s members do eat animal products, from free-range eggs to creamy milks.

We also see how – surprise, surprise – pre-industrial warming periods are linked with positive health outcomes. Indeed, it is said that today’s Sardinians can trace “their origins back roughly 14,000 years” to the region. “At that time, the world was warming after an ice age.”

The book’s strengths? Definitely, the personal-interest stories, but also the fact that the researchers took the time to confirm ages through birth records and other sources.

The book’s weaknesses? I guess when Buettner recommends (say) yoga (not practiced by Sardinians) one wonders if he is just trying to be politically correct.

And when he states, without evidence, “It doesn’t matter if you are Muslim, Christian, Jewish, Buddhist, or Hindu,” what does that mean?

I think it does. Politically incorrect researchers recognise that sun exposure and longevity are allies, a problem for extremists. Sardinia. Loma Linda. Okinawa. The Nicoya Peninsula. While communities in the warmer-than-average Blue Zones clearly enjoy their sunlight, their bones seem to love it.

Still, can the same be said about covered women, in Muslim-majority countries, from a strictly scientific viewpoint? Or even in metropolitan Australia where busy doctors come into contact with Vitamin D-deficient religious females? Thus, when Buettner states that, spending “time outside each day allows even senior Okinawans to have optimal Vitamin D levels year-round” I strongly doubt they’re complying with Tehran’s infamous dress codes.

Soon after finishing Blue Zones, a generous neighbour left some garden zucchinis on my veranda. I’m eating them tonight. I plan to drive up the road to the winery and pick up some Catholic-friendly reds. But is my stomach really ready for sheep’s cheese?

A World Without Uncle Sam