The Office does “Weight Loss”

“You Blogged. We listened.”

At least, that’s Network Ten’s marketing-friendly reason for screening The Office (Season Five) this summer, from December 1. So what’s so exciting?

The American documentary-style comedy is the cleverest show around. Even sharper than the BBC’s version. In this hilarious start to the season, The Office tackles the politics of fat, with an inter-branch weight loss competition. What we see though is a pool of sweaty tears, bodies dripping with disappointments.

“I am on my third day of my cleanse diet,” says office worker Kelly, the now sick-looking Indian bimbo. “All I have to do is drink maple syrup, lemon juice, cayenne pepper and water for all meals.”

But it’s easy to fall off the mental wagon. “I swallowed a tapeworm last night.” 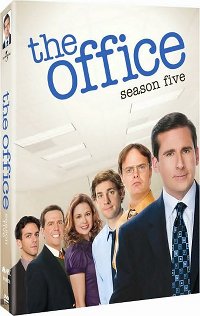 Kelly sincerely believes the worm will grow up to three feet and eat her food. “And then after three months, I take some medicine and then pass it. Creed sold it to me. It’s from Mexico.”

Given the hysteria surrounding obesity – from anorexia in the Nineties to today’s allegedly fat schoolchildren, the issue is an important one. Aren’t we all tired of nanny-dependent eaters? And worriers who talk endlessly about diets?

Indeed, even a male office worker embraces extreme-dieting to better his body.” I’m excited to lose weight for the wedding, because I really want to have washboard abs the first time Angela sees me naked,” confesses Andy, a Prius-driving, global-warmer/Ivy-League graduate with anger management issues.   “Every little boy fantasizes about his fairytale wedding.”

Angela, a vegetarian Christian evangelical, who is more green than Christian, however, is continuing her secret relationship with Dwight, a population-control nut.

The most laughably improper affair in television history, of course. Pathetic, indeed. And yet…it manages to tell us so much about the human condition – even more than my copy of A Critical Dictionary of Psychoanalysis by Charles Rycroft.

Like past seasons, the comedy continues to exploit the contradictions concerning multiculturalism, politically correct businesses, group therapy, women’s rights, and so on. Unlike many Australian comedies, it is a consistent equal-opportunity offender, with a New World maturity.

“Here’s what I used to look like,” boasts Stanley, pointing to a 1970s-period photo from his racist Black Panther days. “Look at those biceps. We were fighting the power and eating whatever we wanted.”

Now he’s a cuddly African-American Catholic, who sends his daughter to private school.

We also catch up with manager Michael’s former girlfriend and superior, Jan.

The clinically insane professional, who found a physically superior sperm-donor, is now bragging about her new candle company, Serenity. (And flaunting her pregnant celery stick frame.)

“Serenity by Jan is kicking ass and taking names,” she brags. “You remember last week when that girl went missing, guess whose candles they used for the vigil?”

Meanwhile, the two irritably indecisive lovebirds, Jim and Pam are trying to find more time for each other, as their relationship schedule continues to clash.

It isn’t easy.  After travelling to his girlfriend’s wavy-gravy art school, in New York, Jim finds himself alone in a student lounge. “Some girl came into Pam’s room crying about her roommate stealing her soy milk. So I’m here waiting it out.”

And there’s also drama when Pam finds herself in the wrong class (“Expressive Typography in New Media”). Is she assertive enough to leave when her professor tells her to stay?

Also, when Dwight, creates a ruse in order to force his fatter colleague to exercise more, tensions boil over.

“You drove me to an abandoned warehouse five miles away and pushed me out of the car,” exclaims a shocked Phyllis.

“And you burned over a thousand calories walking home, and this branch got a little closer to winning the contest," replies the population-control freak.

I do not like pregnant women in my workspace. They’re always complaining. I have varicose veins, too. I have swollen ankles. I’m constantly hungry. Do you think my nipples don’t get sore, too? Do you think I don’t need to know the fastest way to the hospital?

While Australia’s Kath and Kim, safely sneers at the suburbs and John Howard, The Office takes real chances.

Raze God and Parse the Admonition