It’s the end of the world as we know it, and I feel fine

Being a keen student of the disaster movie genre, I was all agog to see 2012, tempered by concern that it would be one of those pontificating we-destroyed-our-own-planet movies. Climate change is now a standard Hollywood disaster movie premise – which, given the dodgy science, is where it belongs – so I was prepared for posturing. But in 2012 we are absolved of all responsibility for changing the climate, which is good, because all the other guilt trips laid down by director Roland Emmerich take up the rest of the movie.

Basic plot: the Mayans were right, and cosmic things happen in 2012 that will cause massive shifts in the earth’s crust and the end of civilisation as we know it. The process by which this takes place is an example of that hard-edged and rigorous science which is working wonders in the media to this day: really big solar flares cause neutrinos to speed up, and then mutate into a form of nuclear energy, and start microwaving the planet. It’s like those B-movies when the professor explains in one sentence just how it is that aliens have been able to come to earth in human form, and the hero slaps his fist into the palm of his hand and says, ‘of COURSE!’, and then goes speeding into the exciting consequences without stopping to examine the science behind it, because, after all, the guy’s a professor, isn’t he. 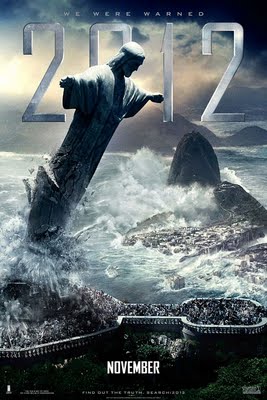 The nice thing about disaster movies is that you can show things that could never happen in real life, like having the US government take the heads of European nations seriously. This is the most European disaster movie I’ve ever seen: Christianity is the butt of jokes and a lot of falling buildings; the British Prime Minister does not exist; the Queen is shown selfishly hurrying to safety. In symbolism so obvious I’m surprised there weren’t ghastly German peaceniks doing street theatre in death masks, the US President is killed when the White House is destroyed by a falling US aircraft carrier, and later the wreckage of Air Force One causes a major accident.

Which just goes to show that if the US President isn’t there to save the day like he usually does (cf Independence Day, Air Force One), then we can rely on the European Union to step in and mediate a nice civilised peace, probably just before they force the remaining fragments of humanity to ratify the Lisbon Treaty. The behaviour of the Chinese government in this movie is another example of good special effects: they cooperate with other governments, allow the building of several massive ‘arks’ on their territory, sell the tickets for billions and actually use the money to build the damn things, and then don’t kill all the round-eyes and fill the arks with their own people. And isn’t it interesting how the heroes of our action movies today are environmental geologists and deep-core-studies scientists? And would you want to be on a humanity-saving ‘ark’ with a lot of flabby time-serving middle-aged bureaucrats?

However, the other special effects – the ones involving mass destruction – are absolutely stupendous and indescribable. You most definitely get your money’s worth with this movie, which seems to have tried to incorporate elements from every other disaster movie for the last thirty years. In short, I hope you will understand me if I say that it has everything but aliens, and I’m sure the aliens only got left out because Woody Harrelson insisted on being on screen for longer than he should have been (PS: you even get to see male cleavage in this movie courtesy of Mr Harrelson, but just no aliens.)

Guilt trips: white men cannot only not jump (a fact ably demonstrated by the deaths of Tom McCarthy as Gordon, and Zlatko Buric as Yuri), but they cannot say goodbye to their children in the meaningful, dignified way that black men can. Also, Russian prostitutes like their bodies the way they are, and only have breast implants when bullied by their overweight-crime-boss men friends. But these are minor bits of pseudo-moralising, and it’s a shame Emmerich had to tell everyone that, while he got a real buzz out of blowing up the Vatican, he didn’t dare show the Dome of the Rock or Mecca getting wrecked because then his pasty white European skin would be in serious jeopardy.

It galls me to say this, but pay the money and see this one on the big screen – oh, all right, go on half-price Tuesday then, if it helps – and take the Euro-sniping with the customary disaster-movie grain of salt.

The Tracks of His Tears

The Gang That Can’t Think Straight