More on the stimulus and why rates went up

The growing chorus of those who think the stimulus should now be withdrawn when, economically speaking, it has only just been introduced is quite instructive about the politics of economics.

What is clear beyond clarity is that the spending on the stimulus package has been a monstrous form of welfare expenditure. To indicate that the stimulus should be unwound basically acknowledges that there is no actual increase in net value through this spending. If the economy were actually going to be better off for the money having been spent, what would be the point of ending the spending now? It is only because there is tacit – never explicit – recognition that the expenditure is valueless is there now an increasing clamour for the spending to be brought to a halt.

What is also now being recognised – again only in a tacit form – is that it is not just “spending” that matters but what that spending is on. Our productive structures are being bent out of shape towards the creation of what can never give this economy momentum or higher real incomes.

What is also becoming more clear each day is that the $43 billion we spent on our domestic stimulus package was a colossal waste of funds. It is becoming more and more evident that whatever drive we find in the Australian economy has been based on the expansion in China. My estimate that the unemployment rate might have reached no higher than just over six per cent appears to be just about right.

The cost per job created is thus truly staggering. Assuming an approximate figure of 43,000 jobs “saved” through the stimulus, the cost of each job retained has been around one million dollars each, found easy enough by dividing $43 billion by the 43,000 additional jobs.

We have thus spent one million dollars to create jobs that will now have to be unwound so that we can actually use our resources productively.

It is the unwinding of the stimulus, when it happens, that might yet see the unemployment rate push up as the economy rids itself of these jobs and tries to adjust towards a structure of production based on the ability of the economy to create value.

It might also be noted that the widely reported fall in unemployment was actually no such thing. There were two aspects that might have given that impression on a superficial reading of the data, one being the use of the seasonally adjusted rather than the trend data, and the other being the much more sinister fall in the participation rate.

The participation rates is the more important matter. It has declined from 65.4% in May to 65.1% in September which has led to a loss of some 52,800 persons from the labour force. Since such missing persons aren’t working and since they have not all just suddenly retired from the workforce, it looks very much as if the underlying number of discouraged workers has gone up.

Using the trend data and adjusting for the fall in the participation rate leads to an unemployment rate of around 6.2%.

And even then it needs to be borne in mind that the labour market is being held up by the rise in part time work which has disguised the fall in full time. As the latest trend labour force data show, the number of full time employees has fallen by 175,700 over the past year.

This is an economy that is far far from recovering. Argue as you will that it would have been worse had there been no stimulus, these are not figures that should make those who manage policy very very nervous.

Yet even with the economy as soft as it is, official interest rates have gone up. And while I am by no means a partisan on the side of using rates to control economic activity, on this occasion the rate increase could not have come soon enough.

The data below are from the most recent set of National Accounts. The data, which were discussed in a previous posting, show the level of National Net Saving and the Saving Ratio. Both are at extraordinarily low levels. 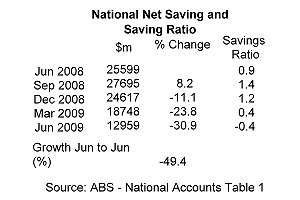 The figures make it unmistakeable that there has been a collapse in the level of national savings available to all users across the economy. These are investable funds that are potentially available for those who would wish to increase our capital base by borrowing the incomes earned by others for use in projects of their own. The funds available have not only cascaded downwards, falling by half over the past year, but the rate of decline has even been accelerating.

This is an outcome that would worry any central banker worth his salt. Depleting our savings in such a savage way will have left us even less able to regenerate growth than we were twelve months ago, before the stimulus spending began.

It might be noted parenthetically that the only justification for a Keynesian stimulus – at least if there were any consistency between the Keynesian models that are taught and the policies everyone is attempting to pursue – is that there are unused saving that need to be soaked up in higher levels of public spending.

Saving in a Keynesian model creates damage because it reduces the level of spending. Since in a Keynesian model we can’t count on investment rising to fill the expenditure void created by our savings, it is the government which must come to the rescue to spend our way to prosperity. It is increased public expenditure and higher deficits that move the economy out of recession.

Well how much nonsense that is! The government, rather than deploying savings no one else is willing to, is spending our savings before anyone else has a chance to get those savings for themselves.

That interest rates must rise in such circumstances is beyond question. They will rise with or without the RBA, and in fact, aside from mortgage rates, already have. Partly the interest rate number has gone up, and partly there has been a restriction on the availability of credit. But up interest rates have gone to reflect the scarcity of credit and for good reason. The RBA is mostly just catching up with the market.

There are then the data from the RBA itself showing the growth rate in Business Credit between March and August this year. No economy entering a serious growth phase should have numbers anything like that. 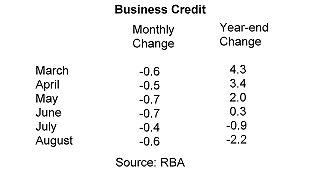 This is almost the classic case of crowding out. Others are getting to these funds sooner and more cheaply than business. Government spending has replaced business spending. The government stimulus is not only wasteful almost down to the last dollar spent, but is preventing the private sector from having access to the funds it needs to invest and employ.

The political side to the rise in interest rates therefore strikes me as a warning shot across the bow of the government. It is a statement from someone worried about the way in which we are ploughing our productive potential into the ground with the certainty that in a year or two we will have an immense debt and nothing to show for it.

Raising rates will hopefully begin the process of sobering up those who have been wasting our resources hand over fist and remind them that there is a price to pay and the debt is starting to be called in now.

One last point. It is said that the rise in interest rates is working in the opposite direction from the increases in public spending. Higher rates will slow the economy while higher public spending will increase it. There is therefore an inconsistency and contradiction in public policy.

This would be true only if there actually were some kind of stimulating effect of higher public spending. Since such spending is a negative, since it only acts to weaken an economy and slow it down, since its only role is to fund various make-work projects, there is nothing contradictory about using higher rates of interest as public spending goes up. It only emphasises how mistaken the Government was to have raised its level of spending in the first place.

Cry for us Argentina

Ma and Pa Have Reason to be Angry