The prospect of being judged according to openly circulated task-specific criteria is a fair and reasonable concept. The statement of clear assessment criteria can sometimes bring out the best in examiners, by providing them with the basis upon which to make a fair and proportioned response. In these circumstances, most students would expect that the essays that best fulfill the criteria would usually be awarded the highest grades. Nevertheless, despite how sensible and fair this concept is at face value, the use of specific criteria can produce some curious behaviour among some examiners that requires special tactics to handle profitably.

This was learnt by one of my year 12 Australian History students. He had to produce a research essay that would be assessed according to several specific criteria, such as its ‘evaluation of evidence’ and its demonstrated ‘understanding of problems associated with representing the past’.

My student, who was clever, industrious and ambitious, threw himself enthusiastically into the project. He drew on additional sources to his designated school textbooks and painstakingly refined his analysis until it was just right. He was so proud of the finished product that he shook my hand at the end of our lesson to express his delight after I told him how impressed I was by his draft and his effort. He had done some excellent work. He deserved to be proud.

He submitted the draft to his teacher for comment, which he was required to do, but he did not expect what followed. His teacher was unimpressed, indicating that the likely outcome of this prodigious effort would only be a ‘C+’. At our lesson that came after this bad news, my bewildered and disillusioned student could not understand what had happened. Indeed, it was puzzling. He believed, correctly, that he had fully met all the assessment criteria, so he had no idea what else he could do to improve. I consoled my student that his work deserved an ‘A’, so there must be another reason for the disappointing assessment from his teacher.

To determine what my student could do to change the situation, I carefully reread his essay along with the teacher’s sparse comments, then I realised what had happened. Instead of reading his essay as a normal person would, as an argument that flowed logically from point to point, his teacher was scanning the essay for evidence that each of the assessment criteria had been covered. It was more like the way a person would scan nearby carpet for a dropped paper clip than the way one would read an argument.

Because of the subtle and reasonably sophisticated wording of the essay, this teacher had simply not noticed that my student had met all the criteria on the list. Alert to the problem, I instructed my student to simply take words and phrases from the official list of assessment criteria and then incorporate them into his essay. It was as if we were drawing attention to the student’s coverage of the criteria by lighting it in neon, so it was unmissable. Therefore, instead of having intelligently evaluated evidence and discussed various problems in representing the past, etc., then hoping that it would be rewarded, as my student had originally done, this time my student used blatant language such as ‘an evaluation of the evidence suggests that…’, and ‘one of the problems associated with representing the past is that…’, and so on. No new material or analysis was added to the essay, only some of the wording was changed, and not much at that. 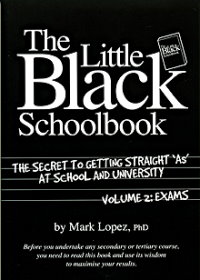 My student submitted the final draft to his teacher. This time the teacher commented on the immense improvement that had been made between the first and final draft. Remember, no new material or analysis had been added. Instead, this time while scanning through my student’s essay, the teacher had noticed the relevant material. My student received the ‘A’ he deserved.

Since then, I have noticed that this ‘criteria scanner’ was not an isolated example. So I have advised many of my high school students to take care to avoid subtlety in the wording of their essays and to instead use words and phrases from the assessment criteria wherever possible. ‘Light it in neon’, I tell them.

Most students assume that if they receive a disappointing result that it is due to the quality of their work.  This may not be the case. It may have been because the work was not presented in the manner necessary for it to be rewarded by an examiner with a curiously irrational approach. This problem is more common than many students realise, yet it is easily overcome by taking some simple precautions.

When Other People’s Money Runs Out