Colette at the movies

I originally sat down to write a really scathing review of Stephen Frears’ new movie Chéri. This film of Colette’s novel stars ageing but still beautiful American actress Michelle Pfeiffer as Lea, an ageing but still beautiful French courtesan with an inexplicable American accent. This is only to be expected, given that Chéri seems to be an American movie trying to look like a French one.

What’s going on? Stephen Frears is a clever man. He has a string of intelligent movies to his name, including My Beautiful Laundrette, Dangerous Liaisons, and The Queen, the last a piece of cinema which punched like a heavyweight, but you had to go away and think about it to feel the full effect.

So why, I wondered, is Chéri so ghastly? As a film, it should have something powerful to say about a doomed relationship between Lea, a much older fallen woman and Chéri, a young and spoilt man; about the hypocrisy of la Belle Epoque; of arranged marriages and the dowry system; of Oedipus and Freud and the whole damn thing. But instead it plays out like an art-house version of The Bold and the Beautiful. 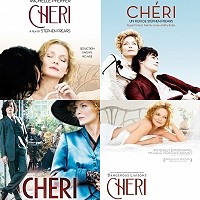 Michelle Pfeiffer is a splendid clotheshorse, and every bit as wooden. She sleepwalks through scene after scene in this lushly-shot film, clad in a series of mouth-watering fin de siècle frocks and hats like wagon wheels. The only bit of decent acting in the entire film is in the last few minutes, when Chéri and Lea have their first believable on-screen tiff. Way too little, way too late.

So I watched the gorgeous scenery (apparently France basked in perpetual summer for the last quarter of the nineteenth century); admired Lea’s real pearl necklace and wondered when Chéri was going to strangle her with it; regretted that he didn’t; mentally drafted a letter to Frears reminding him of the old adage that you don’t introduce a gun unless you mean to fire it; yawned through the lingering camera shots of candle-lit slender flanks in silk-sheeted beds with art nouveau bed heads; and resented the appalling waste of good prawns in an early love scene.

The questions continued. Colette is a witty writer, so why did the script sounds like an upmarket version of the school play? Pfeiffer has a seriously limited range and simply cannot deliver significant pauses, meaningful emphases, evidence of interior life – in short, interpretation.  Yet the rest of the cast was good, including Kathy Bates as a nervous, bitchy old courtesan and scheming mother of the forgettable boy-hero. In a card-playing scene of has-beens reminiscent of Sunset Boulevard, Nicola McAuliffe produces a startlingly realistic old bag who looks just like the elderly Colette herself.

But my favourite poisoned barb in this satin-tufted powder-puff of a film was what finally revealed to me its most capital joke. This was the appearance of the legendary Anita Pallenberg, 1960s Ur-supermodel, rock star girlfriend, chain smoker, boozer, druggie, actress of sorts (cf Barbarella): a female Keith Richards who today looks every inch her age (she and Richards had some children; their DNA must surely be worth cloning). Pallenberg plays – wait for it – an elderly drug-dealing former courtesan known as La Copine, untouched by any hint of remorse, cosmetic assistance, or healthy lifestyle choices.

That wonderful deep German voice is still there, and although she only has a few lines, they pack a wallop. La Copine wears a necklace of pearls which are apparently identical to those owned by Lea, and coveted by Chéri. (This was Frears’ ‘unfired gun’ which gave me such umbrage earlier.) When he meets La Copine in her opium den, Chéri reaches out to touch her necklace, whereupon she delivers the punch line to the entire film: “They’re fake.”

Frears’ voice-over informs us at the end of Chéri that the eponymous hero will grow older, realise that Lea was in fact the love of his life, and will consequently shoot himself in the head with his service revolver. Pallenberg knows all about that: in 1979, 17 year old Scott Cantrell, the 35 year old Pallenberg’s lover at the time, shot himself in the head in Pallenberg’s bed with a gun owned by Keith Richards. Pallenberg was arrested, but was later cleared of manslaughter.

So Chéri turned out to be a movie which did have something powerful to say. Neither Lea nor Chéri are real people on any level; they are both superficial, childish, living in a fantasy world. They in turn are surrounded by a culture which thrived on falsehood and double standards of all kinds. But, more pointedly, they are fictional characters being played by people who are products of another hypocritical culture. The Sunset Boulevard parallel is not accidental; the word ‘hypocrite’ (ὑποκρίτης) originally meant ‘actor’. Look at Anita Pallenberg, and see what every older actress in Hollywood would look like if there was no such thing as nip-and-tuck; look at Anita Pallenberg and see the underbelly of la Belle Epoque, and of a few other places as well. Frears got to fire his gun after all; it just took me a good 24 hours to puzzle it out.

Biggles, No Friend of Reconciliation