“The media are instantly panic-stricken about every Republican scandal, no matter how petty, while aggressively burying all Democrats’ scandals, from President Kennedy’s pathological whoring to Edwards’s affair with Rielle Hunter.” And that’s the good news, types Ann Coulter in Guilty: Liberal “Victims” And Their Assault On America (Crown Forum, 2009). 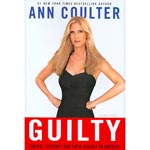 In her startling wake-up call, Coulter contends that liberal Democrats are very good at finding time to worship Obama. They glamorize single motherhood, abort useless gobblers, persecute Christians, sell condom company sales pitches to children, but most outrageously, they will always play the victim. And if you question their one-way speech machine, then God help you (if Democrats allow you to believe in Him).

Even Obama can summon obscure imaginary events from his amazing brain, and campaign on them!

More than simply a call to laughter, Coulter reminds her readers that in today’s society genuine victims are treated like perpetuators, and perpetuators are treated like victims, because that’s the way the thought police operate. Guilty describes the pattern in which the celebrity victim uses his or her race, gender, or class etc. as a weapon. Emotional tricksters are also employed to bully the questioners, the thinkers. As a mentally challenged crybaby, who judges people for judging, the fake victim demands sainthood.

A variety of tactics are used in order to propagandize. For example, those who criticize the secular fundamentalist become media targets. In some cases, they are branded as heretics, for questioning the allegedly unquestionable. Campaigning journalists are defensive creatures too, and fail to see that there’s a difference between causing a problem and exposing a problem. They schizophrenically attack questioners for “attacking” their saints, because no one questions their standards, their chosen leaders, their holier-than-thou agendas.

Until now. While there have always been (and always will be) dissenters, the role of the dissenter is becoming more public, thanks to technology. Coulter reveals: “It’s getting a little old for the media to pretend that Republicans have reached an all-new low every time Republicans quote a Democrat.” And is it awfully mean to talk about Ted Kennedy, the drunken Lion of the Senate too, because he left a young woman to drown? Would Palin get away with murder? Or McCain?

“As John Greer shows in his book In Defense of Negativity: Attack Ads in Presidential Campaigns, negative ads tend to contain far more facts than positive ads. Politicians want to make broad promises and issue meaningless bromides – I will fight for you! – without anyone looking at their records.” What’s more, their trendy philosophies – from apocalyptic global cooling (now warming) tales to the glamorization of poor put-upon Obama – tell us that the elite establishment is not only interested in creating fake victims now, but also imaginary future victims.

Examine fatherless families, or Chapter 2: Victim Of A Crime? Thank A Single Mother. When we remove our emotions from the debate, we see that more than a million American woman have chosen the single motherhood lifestyle, and that 43.1 percent gave birth out of wedlock. We need to see too that there are major differences between, say, expressive divorces (very common) and wife-beater divorces (very rare). We need to see that jails are full of fatherless men for a reason. So who are the real victims? Fatherless children, also known as “future strippers,” or single mothers?  How about victims of crimes?

According to Coulter, the “most worshipped figure in modern America is the ‘single mother.’” 63 percent of all youth suicides are associated with single-parent setups, and she contends that it is time to stop promoting fatherless families as just another family choice. Many single mothers are professional perpetuators.

Consider state juvenile detention centers. Coulter reminds us that 70 percent of long-term inmates were from single mother households, in 1996. And, how many fatherless boys create havoc outside? After controlling for a number of key factors, there’s more bad news: the majority of juvenile murderers, rapists, suicidal teenagers, delinquents, runaways, kiddy murderers and sexually promiscuous girls are single-mother household experiments.