Something curious happens when a left-wing journalist meets Obama. She (or even he) takes the role of a hormonal cheerleader. And you can usually tell that some things are not quite right when the state-serving scribblers stand for Obama. Remember when it was customary to sit for Bush? In one recent case, an Obama-first pantywaist bowed to show his unquestionable devotion. 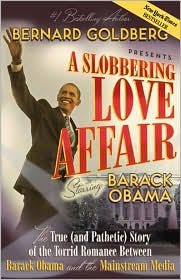 In A Slobbering Love Affair: The True (and Pathetic) Story of the Torrid Romance Between Barack Obama and the Mainstream Media, Bernard Goldberg invites readers to spend time studying America’s campaigning journalists, and their emotional journeys up close. And he knows what he’s talking about as a former CBS reporter: think of him as an anthropologist. (Journalists are like cavemen in the mist.)

Disturbingly, Obama drives talking heads crazy, and is establishing a strong charismatic authority.  “I felt this thrill going up my leg,” testified Chris Matthews who hosts the Hardball show over at MSNBC. The fair-and-balanced professional informed Leno that Barack and Michelle Obama are, “cool people. They are really cool.” Of more concern though was this faith statement: “If you’re in [a room] with Obama, you feel the spirit moving.”

For those who don’t feel strange sensations going up their legs, don’t worry. You’re not alone. But you should ask yourself these questions: What motivates journalists to actively campaign for Obama? (“In 2008, a study by Investors Business Daily put the campaign donation ratio of journalists at more than 11 to 1 in favor of Democrats.”) Is there a syrupy culture of bias in America that dribbles down to Australia? (“In 1980, twice as many journalists voted for Jimmy Carter than for Ronald Reagan.”) How do journalists see themselves? (“In 2007, the Pew Research Center found there were four self-identified [left-wing] liberal journalists for every one conservative.”)

2008 changed politics forever. In an ideal world, journalists would leave their Obama-for-President buttons at home, but emotionalism is more powerful than professionalism. In the “good old days,” left-first journalists disguised their feelings and tried to present themselves as professionals. Now there is no going back. Can we, for example, ever see the New York Times as a fact-seeking paper?

Take one major investigative piece, dated February 21, 2008. As Goldberg points out: “The piece was about John McCain’s alleged sexual relationship with a much younger female lobbyist – and was quickly exposed as a shoddily sourced smear. Even the paper’s own public editor slammed the story,” but there’s more: “The story the Times might have used its vast editorial resources to pursue was the connection between Barack Obama and Bill Ayres,” the unrepentant terrorist.

Although Goldberg’s book focuses on the many ways in which left-first journalists bow to Obama, there are many alternative signs of hope and change. Hope because more people are cancelling their Obama-first newspaper subscriptions and change because the New Media (from talk-radio to innovative websites) are deconstructing the deconstruction-friendly cultists.

Revealingly, Goldberg summarizes a Pew Research Center for the People and the Press study: “Nine out of ten Republicans think the media was rooting for Obama, and more than six out of ten Democrats and Independents think the same thing. Or, to put it another way: just about nobody trusts these people to play fair.” He asks:

What if it were Sarah Palin, and not Joe Biden, who stood before a cheering crowd of conservatives and said the solution to our economic woes could be summed up in “a three-letter word: jobs” – and then went on to spell the word out loud: “J-O-B-S.”

Or what if it were Sarah Palin, and not Joe Biden, who said that in 1929 Franklin Roosevelt “got on television” to reassure the American people “when the stock market crashed” – even though FDR didn’t take office until 1933 and television wasn’t introduce to the general public until 1939?

On Monday, campaigning journalists show that boy band fans have greater critical-thinking skills. By Friday, they’ll be sharing strawberry milkshakes with Obama for research purposes. But the really sad part is that America’s scribbling bourgeoisies act like they’re better than us. They voted for Obama – and they listen to jazz music too. The Obama-serving journalist symbolizes a new smugness.

The good news: slobbering love affairs have a shelf life. For these reasons, and others, critical-thinking Americans are turning away from their “watchdog newspapers.” After all, even compulsive recyclers wouldn’t sift through Sarah Palin’s trashcans.

Forlorn Hopes of an Islamic Reformation