So, what of the title, Gran Torino? For starters, Walt Kowalski (Clint Eastwood), a retired, blue-collar, Polish-American, Ford worker, Korean War veteran type lives in Highland Park, Michigan, a dying automotive-factory state. He owns a 1972 Gran Torino, and – take a deep breath – ethnic gang members target it. Or Thao Vang Lor (Bee Vang), to be specific. The teen rascal tries to steal his neighbour’s pride and joy until he meets Walt’s rifle. 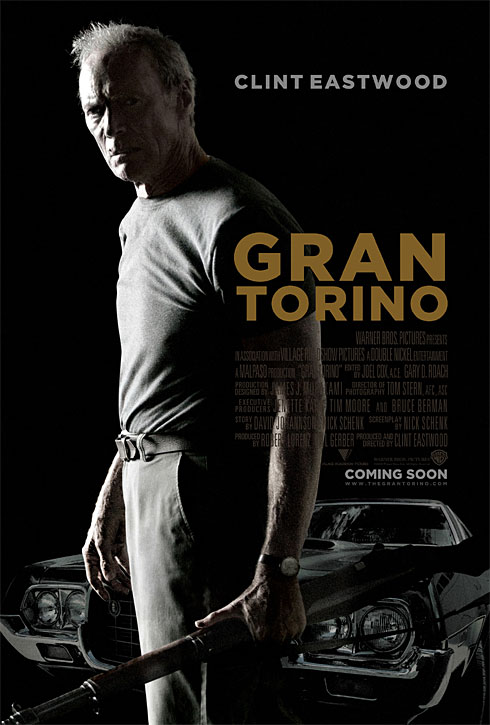 Like Dirty Harry, Eastwood’s new movie provokes, and gives political correctness the finger. You won’t want to miss (a) Eastwood’s word bombs; (b) those rifles; and (c) that car. But inside Gran Torino’s sleek model, is an invitation to rethink multicultural propaganda, or the rainbow picket fence myth.

In Gran Torino, the director/actor Eastwood introduces viewers to an outside-university reality, where multiculturalism is, to put it nicely, less about ethnic eateries and more about street toughs. The pro-First Amendment  movie exposes the left-of-centre bourgeoisie absurdities of the “melting pot” theory, by focusing on ghettos, struggling to breathe,  miles removed from, say, Noam Chomsky’s posh white-majority suburb.  Sure there are spacious multiracial sidewalks, but the pro-Second Amendment movie highlights wars between ethnic gangs: Hispanics, Asians, Africans.

Walt vents about the fighting “kooks,” struggles to make friends with the well-meaning but naive Father Janovich, and more. Yet, he manages to build trust with his Hmong neighbours after a repentant Thao offers to work for him, free of charge. Here, Gran Torino offers a step-by-step strategy for turning boys into men.

Nevertheless it’s clear that the suburbs are in need of a hero, or at least a macho Christ-like figure. Walt mentors Thao and his motherly sister, Sue (Ahney Her), in his manly standoffish way. A rifle, for example, is used to scare off their would-be attackers and it works a treat.

Work builds bridges too. Young Sue: “Kind of ironic, isn’t it?” Old Walt: “What is?” Sue: “Thao washing your car after he tried to steal it.” Walt: “And if he misses a spot, he has to do it all over again.”

Progressively, though, Walt begins to feel more strongly that his neighbourhood is a victim of the unspoken death penalty, and that lawlessness and political correctness are allies. Tough choices must be made. The citizen without an activated conscience may alternate between appeaser and gentile enabler, and that presents a problem for Asians (in this case) bullied by Asians, but also society as a whole. Under Walt’s tough skin is a thinker’s heart.

The remarkable cast shines in the movie’s philosophically indecent moments. Walt, the curser, is also Walt, the doer, and Walt, the joker. “I used to stack fucks likes you, five feet high in Korea, use ya for sand bags,”he says. Or the self-deprecating Polish-American: “I’m no hero. I was just trying to get that babbling gook off my lawn!”

As in real life, interracial jokes fly in all directions from all races, but the religiously incorrect jokes are enough to bring one to tears. “The Lutherans brought us over,” says Sue. “Everybody blames the Lutherans,” replies Walt.

Clearly, Eastwood enjoys playing the provocateur as an actor and a director. Maybe he likes watching cultural relativists choke on their absurd theories too.

In a culturally confused culture, Eastwood’s film brings a moral clarity. Gran Torino calls a spade a spade. Eastwood doesn’t patronize his audiences. Nor are their juvenile university student arguments about cats and mats. “Is the cat on the mat or is the mat on the cat?”

“Many of the insights of the saint stem from his experience as a sinner,” said Eric Hoffer. Eastwood understands this. And remember there’s a world of difference between causing problems and exposing them. The clock regulates our offices but it is art – or at least meaty art – that gives time meaning. Multicultural eateries are all very well, but Gran Tornio cleverly places the emphasis on humanity, and never hides the young, or old, from our eyes.

Interestingly enough, Eastwood, now in his late seventies, also draws attention to the many ways in which elderly people are patronized by their bourgeoisie baby boomer relatives, and he raises some awkward issues. What are the four types of difficult relatives? What are the best responses to their put-downs?

The Academy of Motion Pictures and Sciences, of course, snubbed Eastwood’s movie, Gran Torino for disobeying – my guess – high society’s toe-the-left-wing-line narrative. It’s disappointing. Sad, in fact, that our elites can’t see the cracks on those colourful picket fences. After living in an ethnic-majority suburb (in England) and a violent aboriginal-majority town (far from Canberra), I see the value of street narratives. Raw movies speak to me more than patronising Rabbit Proof Fence myths. They shine lights, and break taboos.

The Irrational Fear of a Cheap, Effective drug

Who Will Oppose SA’s Abortion Travesty?