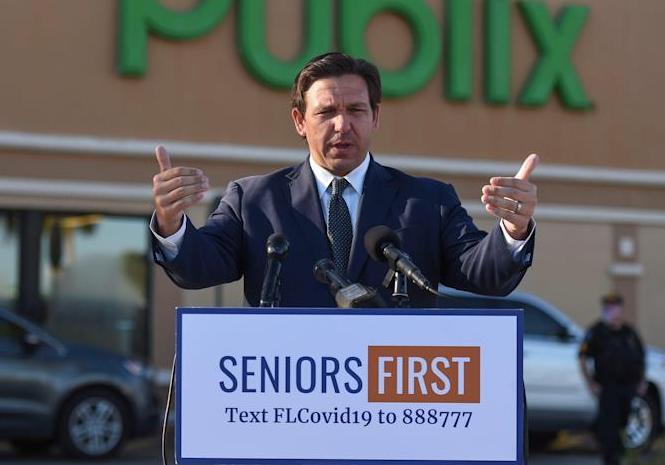 When deaths have to be up-played. Whenever Trump can be blamed. Otherwise, here’s the latest from CDC Director Dr. Rochelle Walensky: “The overwhelming number of deaths, over 75 percent, occurred in people who had at least four co-morbidities. So really these are people who were unwell to begin with.”

We’ve recently learnt that half of those in hospital recorded as COVID patients have in fact entered hospital for other reasons. They were routinely tested and found to have the virus. It’s likely deaths, too, have been overstated and, to boot in Australia, have been offset by the drop in deaths from influenza-cum-pneumonia (IP).

Let’s not beat around the bush. This has been the greatest overreaction since the Archduke Ferdinand and his wife were shot. Now healthy five-year-olds, with zero chance of succumbing to the virus, are being lined up to be injected with an mRNA vaccine, the long-term effects of which are unknown. With such abandonment of responsibility, conscience, decency and common sense, why think this will be over by Christmas? Middle Ages, Modern Ages, CVOID Ages.

Annastacia Palaszczuk’s keeping kids from school for two weeks to give them a better chance of getting the shot, before risking their lives in the classroom. Idiocy, yes. But she’s not as stupid as she acts. There’s a rat cunning at work among the elite and the political class. First, this week’s small example; second, last week’s.

Dominic Perrottet, what a disappointment (see below), says at a press conference on Monday that “over half” the patients in intensive care in NSW are unvaccinated. Half an hour or so later Scott Morrison says that Perrottet said that the patients in intensive care were “predominantly” unvaccinated. Is this an example of the noble lie that Ron DeSantis has rightly rejected in Florida? Or it is simply that today’s callow, ill-educated speech writers no longer have a facility with words?

To Novak Djokovic. What a fiasco. Got visa and then barred from being here. I’m all for the government being able to prevent undesirables from getting or staying here, including so-called boat people. Who, incidentally, the government seems to have a devil of a job removing once they’re ashore? Djokovic doesn’t remotely come under the umbrella of undesirable. Though now “undesirable” and “unvaccinated” are seemly interchangeable.

He’s had the virus and therefore has immunity, at least equal to those vaxxed. Fit and young, he brings no measurable risk of requiring an intensive care hospital bed in Melbourne. As for passing on the virus. Well, he can’t do that if he isn’t infected, can he? And testing sorts that out. To wit, there were and are no medical grounds for booting him out. And to keep the world’s best tennis player incarcerated in a cramped, cheap hotel bordered on cruel and unusual treatment.

One thing our diplomats can put on the table in trying to protect Australians abroad from unjust treatment is the considerate treatment we mete out to foreigners. This kind of thing practised against Djokovic puts us all at risk in foreign lands. What goes around comes around. Don’t admit you’re Australian if you get arrested in Serbia in coming months.

Another disturbing facet of the Djokovic affair is the mean-spiritedness it brought out among some journalists and their readers. The same kind of people, I suggest, who voluntarily and virtuously walk around outside with face nappies. Sorry my prejudice is showing. I know, he’s rich and famous. He’s also a person and entitled to our kindness and consideration.

Thankfully, the Federal Circuit Court set Djokovic free, for now. As I write, it remains to be seen whether the government finally does the right thing or reverts to power-hungry type. Political calculations, devoid of principle, will hold sway.

Think of it this way. Politicians want to let famous people in. Everything in their nature cries out for it. That’s the kind of people they are. They want to mix with the high and mighty. That’s one of the reasons they climbed the greasy political pole. But another, higher calling is to exert power. And the two can clash.

In this case, letting Djokovic in compromises their ability to deny entry to the unvaxxed daughter desperate to come home to comfort her dying father. You see, they say, we’re treating everyone the same. Didn’t let Djokovic in, did we? Let Djokovic in and, just maybe, they’d have to find a way of treating ordinary folk with compassion. Anyway, it’s a lever for us ordinary folk to use. And boy, do we need it in these times of tin-pot political despots.

Finally, back to Perrottet. I saw Ron DeSantis interviewed by Mark Levin on Sunday US time. Considered, articulate and principled. Better COVID hospitalisation rates and fewer deaths than most other states. Emphasis on treatments for the sick, taking care of the vulnerable, and individual responsibility. No vaccine mandates, lockdowns, or school closures. Contrast all that with Perrottet — hesitant, rabbit in the headlamps, spruiking vaccines for young children. In favour of saving unborn children but willing to throw five-year-olds to the pharmaceutical wolves.

An excuse of sorts. Perrottet is a creature of parliamentary factions. DeSantis is his own man. Maybe the grotesque reaction to COVID has shown us that in desperate times, the US constitutional system is better at throwing up strong, principled leaders; as examples, DeSantis, Kristi Noem and Greg Abbott.

Who have we got?

A Five-Step Program to Beat COVID