Would John Locke Get the COVID Jab? 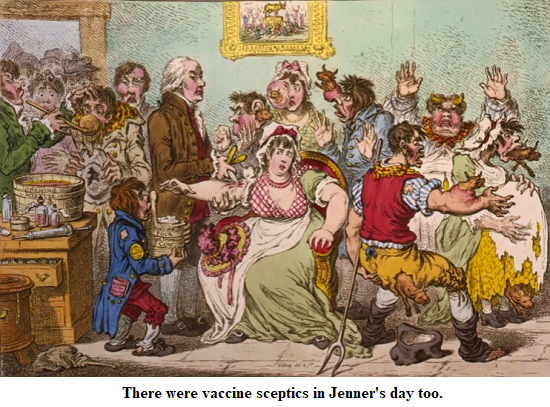 Augusto Zimmermann and Gabriel Moens (‘Emergency measures and the Rule of Law‘, Quadrant, October 2021) present us with an erudite analysis of a rule of law founded on Natural Law, and how it might be applied to emergency measures associated with the COVID epidemic. Eminent jurists and legal academics are enlisted in support, and especially the writings of John Locke. They give confident advice to the High Court on the application of the Constitution to legality of emergency powers.

In Australia, vaccination is by consent, but they want absolute freedom, oppose any mandated vaccination or other indirect restriction on the unvaccinated and assert that this would violate the democratic principle of equality before the law.

In their analysis they have ignored important aspects of John Locke’s writings and his life.  John Locke arrived at Oxford in 1652 to pursue a vocation of medicine, as well as study of philosophy.  At Oxford he was a contemporary of Robert Hooke, and other young students of natural history who attended the experimental laboratory of Robert Boyle.  He also attended physiology lectures and the anatomy lectures of Thomas Willis, famous for his books Cerebri Anatome and Pathologicae Cerebri.  During this time, he met Thomas Sydenham, the most erudite physician of his era.  He served as a clinical apprentice to Sydenham.  Study of natural history, physical sciences and disease was accelerating.

In 1665 he witnessed the Great Plague in London, which caused him to return to Oxford to resume his studies of medicine.   Under the influence of Boyle and Sydenham he began to collect records of the epidemic — the Bills of Mortality and records of the weather. His career became that of a medical research scientist.

During several years spent in France he continued to record regular observations on the climate, geographical locations and prevailing illnesses in many notebooks. He made observations about malaria, scurvy, childhood bladder stones, thyroid enlargement, gout and nerve palsy due to lead poisoning.  Robert Hooke published in 1665 Micrographia, the first book of research findings from using a microscope. Microorganisms had not yet been discovered, and infections were thought to be carried in the air.  Locke visited Anthony van Leeuwenhoek in 1686, who has been described as the father of microbiology because of his later finding of bacteria using his microscope.

Thomas Sydenham and John Locke recognized the epidemic nature of diseases, such as whooping cough, that came and went over a period of time, only to recur after an interval of years.  They were prototype epidemiologists, exploring the causes of disease. John Locke had more to say than Zimmerman and Moens have told us – that we are born into a

State of Nature that has a law of Nature to govern it, which obliges everyone, and reason teaches all mankind, who will but consult it, that all being equal and independent, no one ought harm another in his life, health, liberty or possessions.”  and that everyone  “ought he as much as he can preserve the rest of mankind.”    Freedom is not “a liberty for everyone to do what he lists, to live as he pleases, and not live by any laws.” — Second Treatises

John Locke was a firm advocate of liberty, and much of his writings on political philosophy were directed towards rulers, lawmakers and the judiciary. They had a great impact on the writers of the American Constitution, and  were probably written as a counter to the absolutist political philosophy of Thomas Hobbes.  His Treatises were published towards the end of his career. He makes clear the obligation upon the individuals not to disregard the interests of society as a whole, and to play their part in observing  rule of law.  Health would have been high on his list of priorities.

To bolster their argument on emergency powers, Zimmermann and Moens slide easily into the  “boo” phrases: Public officials with power to detain citizens prevent them returning to their homes amid forced lockdowns.  Events in Germany in the 1930’s are cited: lawyers who provided legitimacy to the Nazi regime, and “ruthless violence and basic contempt for the rule of law.”  This has  progressed in Australia, they assert, to “the army brought in to conduct surveillance and enforce compliance” and  a “violently repressive and discriminatory police state.”

But all this is the preamble to a rant against vaccination worthy of the wildest anti-vax fringe attitudes.  They have used every phrase they can muster to denigrate vaccination. Vaccine hesitancy is justified because “vaccines are still experimental”  and there is “lack of confidence in their effectiveness”;  people distrust AstraZeneca and there are “many different and inconsistent opinions” and it is “potentially unsafe” with a “shambolic rollout”. Further,

“The government response…has… “fatally compromised the rights and freedoms of people and devastated the economies of the free world.”

Nothing to do with COVID? Blame the government instead?

The AstraZeneca vaccine is a “chimpanzee adenovirus”.   This objection reminds us that when Jenner’s cowpox vaccine came into use in England around 1800 a cartoonist had fun (above) drawing patients who had grown cow parts.  As yet there are no reports of patients acquiring ape-like features following AstraZeneca!

Taken to extremes  the argument  against restrictions on the rights and freedoms of the individual could be used to oppose many laws.  For example, laws seeking to control anti-competitive behavior, corporation laws, planning regulations, and regulations for social security benefits impose restrictions on individuals that are deemed for the benefit of society more generally.

To understand the role of vaccination it may help the authors if they study the story of smallpox vaccination. It has a long history, if one includes the observations of cow herdsmen in ancient times.  But the modern story begins with Edward Jenner’s explorations of the apparent immunity of milkmaids and cowherds. John Hunter, his teacher and friend, famously advised “do not think, but try; be patient be accurate”, which led to a clinical trial. Jenner had his paper on vaccination initially rejected by the Royal Society, of which he was a member.  Jenner lacked the support of a modern laboratory, even a knowledge of viruses and bacteria, but his observations eventually led to the complete eradication of smallpox, a disease with great morbidity.

They could also study the great epidemic scourge of my childhood era, poliomyelitis, and the discovery by Salk and Sabine of vaccines against poliomyelitis.

Certainly, there is much to criticize in the administration of emergency health regulations, in particular the disastrous hotel quarantine mismanagement implemented by Victoria’s Daniel Andrews,  and other ineffective quarantine measures.  Clumsy border closures often failed to recognize the social and economic needs of local communities, including work, education and health.  Families were kept from their homes and even children separated from parents.  This is the working of an inconsiderate and slow bureaucracy and not, I fear, anything that the High Court could fix.  By definition, emergency regulations must be temporary.

Would John Locke have taken the jab?  If one reads in full his life and writings there is little doubt that he would, for the good of society. Pestilence, the horseman of the Apocalypse riding his black horse, is still one of the great threats to our freedom and liberty, and John Locke, the student of epidemiology, would recognize this.

The authors try to cite John Locke’s writing On Slavery in urging civil disobedience. But John Locke, epidemiologist and believer in the rational application of Natural Law, would be in the forefront of urging us to take the vaccine during an epidemic.