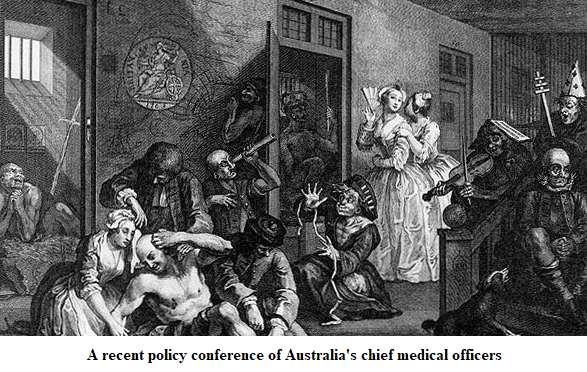 This disease first emerged approximately 18 months ago and spread across the world. It is particularly prevalent in Western democracies. Primarily a mental disease, it does have some physical manifestations such as indiscriminate mask-wearing.

♦ Living in a state of dread or irrational and hysterical fear

♦ Loss of ability to think critically and undertake independent research

Fortunately, this disorder is contained largely (but not exclusively) to persons in positions of authority. It is found with greatest prevalence within the ranks of elected officials and senior public servants.

It is believed that the condition cannot exist alone but requires a symbiotic relationship with Covidiocy.

♦ Memory loss regarding key lessons of medical and epidemiological history

♦ Repeating unsuccessful behaviours in the hope that the outcome will change

♦ An emerging and troubling addiction to authoritarian control

♦ Selective bias where all data inconsistent with policy settings is ignored

This disease is believed to have escaped from a Big Pharma gain-of-funding research facility. This is only suspected at this stage and further research into its genesis is required.

Disease spread is believed to occur primarily among those in the community who have limited innate immunity. These persons are characterised by existing almost exclusively on an unhealthy diet of media material. This is alarmist material which maintains little balance or objectivity. Repetitive subliminal messaging containing images of ‘busy Italian hospitals’ and ‘Indian funeral pyres’ are also believed to play a role in the spread of the infection to susceptible people.

When combined with fear this limited diet makes for a potent disease cocktail.

Fortunately, it appears that approximately 25 to 30 per cent of the population has sufficient innate immunity to the disease and is capable of effectively resisting it despite frequent exposure to the antigen.

The current view is that a combination of treatment and vaccination is required to get this “beast” of a disease under control and reverse the disease incidence in the community.

Initial treatment protocol requires a balanced media diet to counteract the “one-sided’ ingestion to date. This must be supplemented by a degree of personal development whereby the infected person undertakes research and daily rational thought. Like all exercise regimes it is difficult at first but becomes easier with practice.

Vaccine development is currently being undertaken in selected media laboratories around the world. The final composition of the vaccine is still evolving but is believed to contain several key ingredients including:

It is hoped that the vaccine can be rolled out progressively over the coming months and that it will rapidly gain momentum. It is believed that we need to treat and vaccinate at least 50 per cent of each population to obtain “herd immunity” by which time Covidiocy can be brought under control. It is hoped that “lowering the curve” on Covidiocy will also bring Polunacy under control. Elimination is not possible because some elements of Covidiocy will always be circulating. We will just have to learn to live with it.

In particular it is believed certain media and social-media  companies will remain as re-infection sources and will need to be closely monitored to minimise further outbreaks.

Tim Casey is an economist who lives in Perth, where Covidiocy is prevalent

The Wholesale Banishment of Reasonable Doubt