Of Gods and Men

I have just had the pleasure of seeing Xavier Beauvois’ French film, Of Gods and Men (Des hommes et des dieux), which won the Grand Prix (second prize in Cannes last year). John Kiser’s book, The Monks of Tibhirine, was used to guide the movie’s storyline.

Sometimes good things happen for obscure reasons. In this case, I happened to see the film reviewed last week on At the Movies and was taken by the deliberate pace and sparseness of language, which I thought might help overcome my own almost complete inability to understand French speakers after 18 months of trying to learn the language, and by Margaret Pomeranz’s strange take on the movie.

The movie is an account of real events which occurred in a poor rural part of Algeria in the nineteen nineties when Islamic fundamentalists were trying to overthrow the military government. 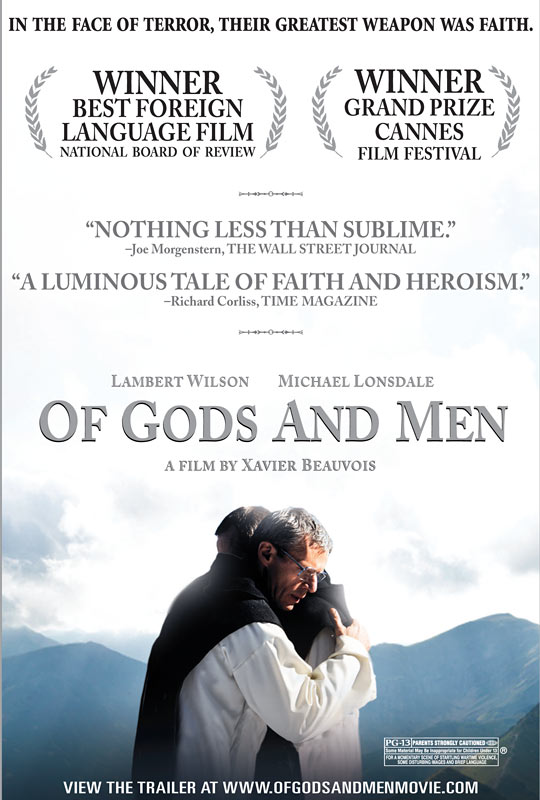 A group of French Trappist monks, in the monastery of Tibhirine, seemingly left behind by time and events form an important and valued part of the life of the local village. The movie goes to some lengths to show how the Catholic monks and the Muslim villagers lived in complete harmony; making the Pomeranz view particularly bizarre, as I will shortly explain.

There is no background sound track to the movie. The sound track is effectively the prayers of the monks and their Gregorian chanting which take up a fair part of the two hours. Most of the balance of the movie depicts the simple life of the monks, making and selling honey, planting, cooking, cleaning, talking with or advising the villagers all with few well chosen words, or in the case of br. Luc (played by the well known Michael Lonsdale, who I best recall as the indefatigable police detective in the 1973 movie The Day of the Jackal) providing the villagers with medical attention. Don’t ask me why this is worth spending so much time over. It just is and you have to see it to understand how well it all works; how comforting and appealing it is. The movie’s languid pace is totally in keeping with the life of the monks and life in the village.

Into this peaceful and harmonious existence comes the discordance of the Armed Islamic Group and the Algerian Army. The former threatening; the latter offering protection of sorts but at a price that br. Christian (Lambert Wilson), the monastery’s Prior, cannot accept.

The struggle that the monks have about whether to leave, as is being urged on them by the military and the government, or to stay and risk almost certain death, seems to me to be reminiscent of Christ’s struggle before his crucifixion. Their courage, wilting at first, eventually wins out. Bring your tissues for their last evening meal together (most definitely mirrored on the Last Supper) as Tchaikovsky’s Swan Lake carries the emotional mood without a word spoken.

Of the nine monks in the monastery at the time, seven were taken hostage in March 1996. Their heads were found two months later. The Armed Islamic Group claimed responsibility; though counter claims have emerged that the Algerian military killed them in a botched rescue attempt and cut off their heads to make it seem as though the Islamists were responsible. Seems unlikely but apparently there is a French judicial investigation underway.

Back to Ms Pomeranz: “there’s no consciousness of them, remaining provocatively in this place…  ultimately what happens is that they lead their Muslim brothers to an unspeakable act of violence by staying there”. “That’s a strange interpretation of it”, said David Stratton; and so it is. There are two kinds of Muslims in the film. One kind we see cutting the throats of Croatian migrant workers, presumably because they are infidels; or killing a fifteen year old girl caught without a headscarf on a bus – so one of the villagers reports in outrage and puzzlement. The others live in harmony with those of a different faith. Presumably Ms Pomeranz does not think the fifteen year old girl led her brothers to an unspeakable act or the Croatians? How about the Jews who had the temerity to remain in Germany when the Nazis were taking over? This kind of Left nonsense which blames everything on those from the West, whatever the circumstances, is at least patently and transparently silly on this occasion.

The film isn’t overtly political at all in fact and I don’t believe it tries to be. But if a political lesson is to be drawn it is that Christian monks and passive peaceful Muslim villagers are no match, in this world, for theocratic fundamentalists.

My score matches David Stratton’s 4½, but I would not find it hard to give it 5.