What a difference a few years can make: Labor hero one election; outcast the next. In 2004 Anthony Albanese claimed that the Party was solidly behind its leader Mark Latham, despite rumblings about his presidential campaign style and “rough nut image” in the electorate. Then last year, the biggest insult he could throw at Malcolm Turnbull in the Parliament was to liken him to Latham. 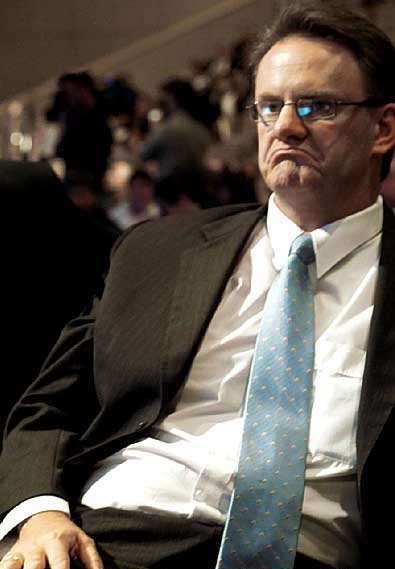 You might think Albanese would be embarrassed about having supported someone to be prime minister who he now uses as a term of abuse. Not a bit of it. “Watching the Leader of the Opposition I could have sworn I was witnessing the ghost of Mark Latham. It was all there Mr Speaker – the jaw jutting out, all the fake aggression, all the machismo…” Albanese was prescient because Latham is doing his ghostly best to haunt Labor.

There he was again larger than life on 60 Minutes giving his view of the election campaign. Of course, journalists are now at one with the Labor Party in disliking him. He tends to grab the attention away from their penetrating questioning of Gillard and Rudd. He’s “boorish” they say; “an insult to the humblest copy boy”, one journo wrote. Channel Nine’s Laurie Oakes described him “as full of bile settling old scores” and, the biggest insult of all, “not a journalist”.

These journos should be wary because Mark is a fearsome man. President Reagan took a bullet with equanimity but even he might have blanched at the sight of Mark striding towards him. John Howard suffered his intimidatory handshake prior to the 2004 election and only recently did he confront feisty Julia and ex-boxer Tony on the campaign trail. While both appeared to stand up well, suffering only slight injuries to their dignity, I have it on reliable authority that both needed to be sedated and reassured that Mark had gone before venturing out again.

You have to hand it to Mark he is not a shrinking violet. He speaks his mind. Though nothing on 60 Minutes came as colourfully low as a “conga line of suck holes”, he fired off a few clichés at the two sides. He described the campaigns of both Gillard and Abbott as “carefully managed races to the bottom”, full of “empty slogans and no substance”.

Perhaps the Labor Party will have been relieved that he got stuck into both parties; though he reserved his sharpest lines for the “Hollywood-style acting that didn’t work” in the “behind closed doors” “sham meeting” between Julia and “the former leader, leaker Kevin Rudd”. At least in Mark’s mind there is no doubt who the leaker was and you can’t help but think it must be poisonous between Julia and Kevin when out of camera shot.

Mark even managed to get Bob Brown and Pauline Hanson in their cameo appearances to be even-handedly critical of Gillard and Abbott, or maybe that was the 60 Minutes editors. Mark thought that Bob Brown should get more publicity because he will control the Senate. Brown, as usual, was Green-delusional in imagining that neither Labor nor the Coalition had the answers but that he did. Pauline “didn’t like”, “didn’t trust” Julia Gillard and wanted her to “please explain” why she dumped Rudd. On the other hand, she couldn’t “forgive or forget” Tony Abbott’s slush-fund role in her imprisonment. So Mark managed to extract equal minus points for both Gillard and Abbott.

Finally Mark put out one of those teasers that keep people watching. He was going to tell us which way he would vote. He did, and perhaps contravened the electoral act by advising us to vote his particular way (though I am no lawyer). His way is to give the Parties what they have given us, “a blank sheet of paper”, and vote informally, by leaving the ballot papers blank.

So Mark is sitting on the fence in this election, which doesn’t perhaps fit with his macho and decisive image. Maybe he is mellowing?

I hope not. It would be refreshing to see more of Mark Latham as the straight-talking journalist after the election, despite what “real” journalists like Laurie Oakes think. Keep on irritating them Mark.

Dunderheads and the dole