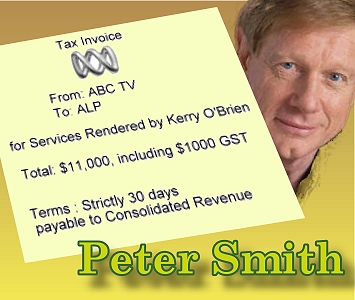 Issued on behalf of Australian taxpayers to the Australian Labor Party for services rendered by the ABC.

The services in question were three separate interviews conducted by Kerry O’Brien, the moderator of the 7.30 Report. The first was on the evening of 24 June when Mr O’Brien interviewed Julia Gillard on her miraculous ascension to the prime ministership. The second interviewee was Stephen Smith, Minister for Foreign Affairs, and the third was Tony Abbott, Leader of the Opposition.

Our calculation is that the interviews took approximately 30 minutes or so of air time with another 90 minutes of preparation. All told this was two hours of Kerry’s time at $5000 per hour, taking account of the various support staff, scripting, makeup and the like; he needs to prepare him for air.

Herewith therefore is our bill for $11,000, including $1000 GST, payable to Consolidated Revenue. Terms strictly 30 days.

I think you will agree that Kerry’s particularly fawning and toadying interview of Julia was on the money; in the face of her difficulties, which were many. She had after all consistently pledged loyalty to Kevin; she had been part of the kitchen cabinet which made all of the policy decisions and she had defended those decisions. Now she had to explain why Kevin had to go and how the Government had "lost its way". Impossible you might say, but Kerry handled it with aplomb.

He parodied Richard Carleton’s 1983 interview of Hawke after Hayden had been dumped: blood, knives etc. But that was a well planned initial move to give the impression he would pull no punches. We think it worked well. Thereafter he was a pussycat in Julia’s hands. I think affection, even adoration, may have even shown through but oh shucks, on reflection, I think Kerry got away with it without giving the game away.

Kerry I think was particularly good with Stephen Smith, who you will agree looked very relaxed. Stephen made that point about being part of the honourable old school and that Julia could have her way with him, even taking his job and giving it to Kevin was okay by him. Kerry gently probed this tough issue but in a man- to-man kind of way. Shared moments of humour and understanding littered the interview. Stephen I am sure you will agree came way looking like a gentleman who in a million years would take no part in stabbing his leader peremptorily in the back.

Abbott on the other hand was clearly uncomfortable from the get-go. That is worth a few bob and you get that for nothing. Kerry can be intimidating to Liberal leaders who just think he is waiting to trap them. Thank God little Johnny’s gone. I think you will agree that Kerry was particularly clever from the start.

He charged that Abbott had used hyperbole in Parliament in describing Rudd’s demise. How do you respond to that? There’s poor old Kev blubbering at the dastardly and unprecedented coup and Kerry gets right onto the front foot and accuses Abbott of hyperbole. What, hyperbole in Australian parliamentary proceedings, surely not, litotes is the usual lingua franca. It was a master stroke of how to confuse your opponent.

Then, while Abbott was wrong-footed trying to work out how hyperbolic he had been, Kerry struck again, saying well hadn’t exactly the same thing been done to Turnbull as was done to Rudd. He even had a clip at the ready of Abbott immediately after his leadership victory saying things similar to those said by Julia; absolutely proving the two events where the same. This had Abbott desperately trying to get a foothold on where things were going – who wouldn’t – but Kerry struck with the tried and true ‘what if’ hypothesis. Wouldn’t Abbott be up the creek without a paddle, if Julia forged agreement with the miners? Abbott spluttered, and Kerry moved in with the coup do grace about Abbott admitting that what he says can’t always be taken as gospel. You will recall that Kerry suckered that out of Abbott a little time ago.

Brilliantly, Abbott was denied any platform to explore the inconsistencies of replacing a dumped Prime Minister with a deputy Prime Minister who had helped develop, prosecute and support the very policies which now, apparently, she believes has put the government off track.

All in all I am sure you agree that it went very well and I look forward to your cheque for the required sum. Please be assured that Kerry and, for that matter, all members of the ABC’s news staff are available on future occasions (mate’s rates as always).

Australian Taxpayers for our ABC

You’ve got it. She wants it. They’ll take it