Farce in our midst

A farce is a dramatic work which, according to my dictionary, typically includes ludicrously improbable situations. We expect to see farces on stage. When they happen in real life maybe it’s harder to spot them. It must, because we are now living in the middle of one that would stretch the imagination of playwright and audience alike. 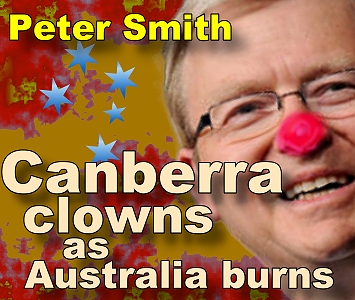 I think it is because of an unwarranted assumption that governments act rationally even when we might not agree with them. It is so hard to believe that governments can completely lose the plot and create ludicrously improbable situations in our day and age, when we are so sophisticated and wise. Idiotic schemes and cunning plans, that would stretch Baldrick’s flights of fancy, are discussed in polite terms – as though rational thought-processes can be brought to bear – because they are prosecuted by government.

It would be hard, for example, to write a farce having as an unlikely a plot line as the now aborted ceiling insulation fiasco, led by an ex-pop protest singer. Billions spent; rorting and shonky work; people electrocuted; people unsafe in their beds; houses burnt down; companies, running perfectly good businesses beforehand, ruined. Cheerleading chorus, Rudd, Swan and Henry, exit stage left, as the first ceiling goes up in smoke.

Follow that up with the same group of people led by Julia Gillard (otherwise employed to make employing people harder) spending even more billions of taxpayers’ money on assorted school buildings throughout the country, needed or not. Of course, they were all needed in the sense that if the government came along an offered to build you an extra room free you might say yes. Now imagine that you build halls, when classrooms are needed or libraries when halls are needed and refuse to do things that are really needed and put in place a system which means that everything costs a lot more than is normally the case. Obviously you might question whether the plot has become too unrealistic but our intrepid author has not finished yet.

In a Rex Connor moment, Stephen Conroy, without any cost-benefit study, announces he wants to spend $43 billion on crisscrossing the country with fibre optic cable, with private sector involvement assumed. Retrospectively – yes, really, retrospectively – a study is commissioned to see whether the scheme passes muster. Unsurprisingly, the study suggests that it is best to keep the scheme in public hands for 15 years. Why, because the private sector is prone to acting rationally and wouldn’t touch it with a barge pole. Exactly what will world’s best practice communications look like in 15 years? Nobody knows. Maybe if you are building a high speed rail link from Sydney to Melbourne it is safe to assume that teleporting people will not be around in 15 years’ time, but when you are talking about transporting bits of information, 15 years is an eternity.

The final plot line is to commission a publicly funded review of the taxation system; to sit on the report for some months; engage in no public consultation, and then to announce a huge increase in taxation on those companies which are the engine room of Australia’s economy. But if that in itself doesn’t generate enough laughter you add the lines of experienced thespians: Kevin Rudd, Wayne Swan and Martin Ferguson. To paraphrase with theatrical license: “It is all okay because foreigners – and, in parenthesis, I exclude, with specificity, from any pejorative connotations of that comment any possible imagined slight, barb or criticism of any kind whatsoever that may be inferred to be directed towards our friends the Chinese, who I admire greatly and I want to be absolutely crystal clear about that – own a lot of the mining industry.”(Rudd). “Unless we tax the bejesus out of the mining companies don’t expect any superannuation goodies; it’s all interdependent you know. No tax, no goodies.” (Swan) “It’s all the mining companies’ fault in talking down their share prices; nothing at all to do with us. Hello, hello, is anybody listening can someone please tell me how what I say ever makes any sense?” (Ferguson)

I am not sure how the denouement reads; hopefully with a new, less farcical, government.

A surplus of black holes