The Fairy Tale That Defines Our Times 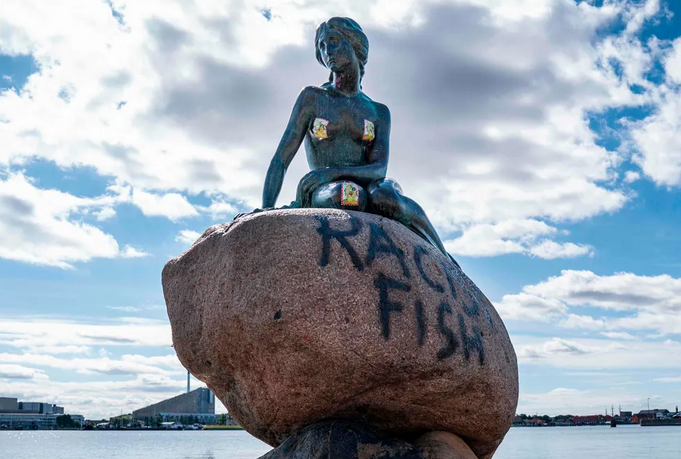 A month ago, Hans Christian Andersen’s ‘The Little Mermaid’ had the rare honour of being the first statue celebrating the work of a famous fabulist to be vandalised in the Black Lives Matters/Antifa insurrection of 2020.  ‘Racist Fish’ was sprayed in black paint on the iconic statue that has faced out to sea from Copenhagen’s central waterside promenade for over a century.

This isn’t the first time the famous nymphet has been attacked. Over the last century she’s been beheaded, twice; had an arm chopped off; had paint thrown over her and been the canvas for other statements of political dissent and paeans to personal misery. Years ago, a radical feminist group claimed responsibility for one of the beheadings, to “create a symbol of the sexually fixated and misogynist male dream of women as bodies without heads”. Next to this, ‘Racist Fish’ is both dadaesque and jejune.

But it is Herr Andersen’s other well know tale, ‘The Princess and The Pea’, that properly captures the pathologies of our age.  There are no statues to the famously sensitive princess, and the ‘pea’ rests in a museum only in the story.  However, its appeal to modernity should interest us the most.

A modern take would go something like this: a young cis-gendered heterosexual narcissist is looking to marry someone equally unique, but he is paranoid about being gaslighted by unworthy suitors. His mother, the queen, conspires with, and encourages his sense of specialness by devising a test to see if an imperceptibly small irritant makes his latest girlfriend more non-specifically fragile than usual. If all goes to plan — that is, if the princess is as emotionally impaired as she hopes —  the queen will proclaim the marriage and all will live happily ever after.

And against the odds, it works! The prize, here the prince, is won by a woman-child who has a catastrophic reaction to as trivial an insult as is humanly possible to produce. Worse still, her inability to verbalise any rational connection between the insult and her ridiculous reaction is both necessary and sufficient for nuptial promises and eternal bliss. In fairness, no one comes out of this well. The king is never mentioned; probably working out of town, or up to no good. And the prince is merely a cipher. For this is a proper women’s story – a symbolic unraveling of the machinations of toxic femininity.

The scheming queen is clearly suffering from some sort of oedipal psychosis. What sort of mother would trap her son in such a disastrous coupling? When it fails, as she knows it must, will the little prince come running home to mummy, as she hopes? Even if it lasts longer than she anticipates, the new daughter-in-law would be foolish to trust anyone who would make her sleep two stories off the ground, such that any restlessness in the night, or a careless excursion to relieve a full bladder, will result in her certain death.

And what of the poor girl? Apart from the obvious psychological maladies – why, for instance, was she wandering, drenched and alone, in the dark like lady Macbeth? — she lacks either the manners or the self-preservation instincts to conceal her peevishness from someone who makes beds like a crazy woman. The twenty mattresses, the things that disguise the irritant are important too. The number seems random. But I think we are safe to assume that, like a homeopathic remedy, if there were 200, or even 2000 mattresses, the injuries would be even worse. Instead of spending the morning whining over tea and toast, the princess would probably be found dead, her corpse bruised and broken atop the tower of limitless support.

The bigger picture is how this story resonates today. We live in a world of over-reaction to the trivial. And just as with the fabled princess, the intensity of the reaction is the only thing that matters. It is both necessary and sufficient. A believable, rational link to the putative cause is worse than irrelevant.

Modern ‘cancel culture’ is the example par-excellence. This is the phenomenon where audiences of emotionally tormented princesses need to be thoroughly protected from any rational interrogation of their ideas, to the extent that any suggestion they might be misinterpreting things or, God forbid, over-reacting, is evidence of naked bigotry and aggression.

The latest victims of this phenomenon are American journalists Andrew Sullivan and Bari Weiss.

Sullivan, a self-described anti-Trump conservative, was a popular columnist at New York Magazine. He left the magazine in July because, he said, ‘a critical mass’ of staff no longer waned to associate with him, and he was tired of writing from a ‘defensive crouch’. He had this to say in his final column:

They (management and staff at the magazine) seem to believe, and this is increasingly the orthodoxy in mainstream media, that any writer not actively committed to critical theory in questions of race, gender, sexual orientation, and gender identity is actively, physically harming co-workers merely by existing in the same virtual space.

Bari Weiss, conservative-centrist and op-ed staff writer at The New York Times also resigned in recent weeks. Weiss was more explicit about her bullying and the authoritarian woke culture at the famous “newspaper of record”. She tweeted about the culture of the ‘New Guard’ at the paper and their preference for: ” ‘safetyism’, in which the right of people to feel emotionally and psychologically safe trumps what were previously considered core liberal values, like free speech.”

When free speech is the unbearable pea, protected, as it once was, by layer upon layer of universal education, and the years of peace and stability afforded by some of the greatest liberal democratic institutions in the history of the world, then there is a problem. The princesses have lost their collective minds.

Unfortunately, things get even more bizarre in our dystopian fairy tale. For some, the pea is not even a real pea, but an imaginary one — the mere notion of pea, a historical pea – and the princess is imaginary too. The famous hysterical hangover is but a fond hope that the imaginary princess is suffering enough to fund the lifestyles of an assortment of activists and provocateurs by keeping their idea of the pea alive.

Australians could have been forgiven for thinking that Coon cheese slices were at least flat enough to slip nicely between the mattresses, and in another time and place they might have been difficult to detect.  Now, finally, in 2020, after 85 years of rough sleeps, Saputo, the Canadian owners has been moved to “(perform) a careful and diligent review of a sensitive situation involving one of our brands.” Sensitive situation indeed, but relieving to know that now poor old Coon has been retired, somewhere, someone none of us has ever met, will be sleeping easy.

Like Coon, Australia Day is another pea between the national mattresses. Each year on January 26, increasing numbers of mostly white Australians march to protest the memory of the arrival of the dreaded colonial pea. This is a symbolic pea, one that fires the imaginations of those hoping to improve the sleep of restless people dreaming about birth-rights denied them by the dispossession of impossibly unrelated imaginary others, who, ironically, slept quite soundly without any mattresses.

Back in America, the Black Lives Matters (BLM) princesses, those vandalising and burning Portland in the US, have woken up in the foulest of moods. George Floyd long forgotten, and having been moved on from the Seattle autonomous zone, they are tired and cranky. Even so, they are egged on to further unrest by their sadistic mothers-in-law in the groupthink media and the leftist propagandists. They have been told their dissatisfactions are caused by racist, historical peas from olden-day pea plantations, now with the winding cancerous shoots of systemicism.

Of course, the white Marxist Antifa/BLM kiddies and the dumb chancers who line the rioters’ barricades don’t know what any of this means. Of course they don’t. How could they? Nobody does. It’s all a mad fiction. And here, dear readers, we come to the ultimate point of our story. In case you never guessed: it was never about the pea, or the princess.

You see, in the story, the old queen never cared a jot about the princess. Like all bitter old queens of yore, she was in it for her son, the one who leaves the story in the first paragraph, her link to power ever after. Whether the pea existed or not, never mattered. It was never meant to be ‘outcome determinative’, as the lawyers might say. It was all about finding an emotionally naïve princess, our story’s useful idiot, for an arranged but ultimately doomed marriage, and the scheming queen keeping her golden boy and therefore her power.

The ‘Princess and the Pea’ was never a happy story about the rarity of true love. It was always about power, and hanging on to power by keeping the people you’re supposed to care about crazily reactive and childlike. In this way, our modern evil queens cling to power. If you don’t know who they are, follow the trail. Who are the ones talking up the peas, and making the princes and princesses feel worthy by feeding their neuroticism and narcissism? It is there you will find the nasty queens, the true villains of our story.

Murray Walters is a Brisbane psychiatrist

Sniffing for a quisling