Osama Was My Dreamboat

On the western flood plain of the Maribyrnong, the lesser of Melbourne’s two brown rivers, Buddhists have built themselves a handsome temple and, most arresting, a gigantic golden statue of their guiding philosophy’s founder (left). It is quite the spectacle and well worth a glance as your Werribee-bound train approaches Footscray station. But unless you have a particular interest in the sound of one hand clapping, a glance is all it’s worth — and, obligingly, Buddhists don’t see any need for grants and government programs to promote “understanding” of their creed. Alas that another religion were so content to mind its own business. As Fairfax Media demonstrates today with a series of profiles — Australia’s Muslims Speak Up — it seems that one cannot be regarded as a fair and unbiased citizen without an obligatory knowledge of Islam, its adherents, their agonies and the bigotry we are told yet again makes the lives of Australia’s faithful so very difficult.

That, at any rate, is the series’ intent. The end result, however, is the polar opposite. Unwittingly, wrapped in its gush of multi-culti pablum, at least one of the profiles illustrates why one doesn’t need to be a peddler of prejudice to find Islam more than somewhat alien and not a little unsettling.

The subject of this extended plea for understanding and empathy is 32-year-old Aisha Novakovich, described as “community advocate, law student and mother of two”. Her first-person story,  ghost-written by Fairfax’s Beau Donelly, professes to be an account of “Islamophobia and anti-Muslim discrimination in Australia” by one who has been its victim. This is where, like so many Fairfax stories, a hefty measure of cognitive dissonance is required to accept the politically correct premise. 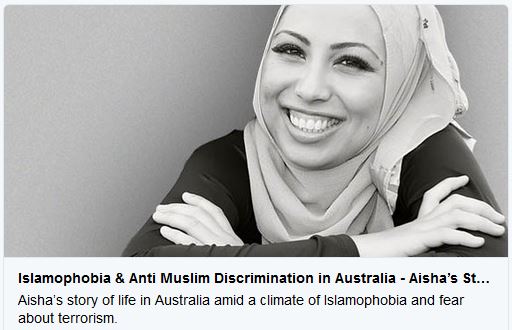 Those lacking the gift for believing that which is at at odds with the evidence will be appalled, to put it mildly, by Ms Novakovich’s personal history, the intolerance and contempt she displayed as a youth for others and, perhaps worst of all, the tokenist pandering of political leaders and community-award distributors who pointedly overlooked the obvious when hailing her as a herald of the future to which all Australians must aspire. But let Ms Novakovich tell her story in her own words. This how it begins:

As a teenager, I had a laminated photo of Osama Bin Laden in my bedroom. A friend once saw the photo and demanded to know why I had it. I told her he was my hero and that I wanted to be one of his wives; that the media was manipulating his image because he was challenging US hegemony.

From the age of 14, I wore the niqab – the full face veil – with gloves. My mother hated it and said I was becoming a fanatic. For me, it became a marker of difference in the face of discrimination. At university I was determined to learn the political systems in the West in order to subvert and challenge them from within. I believed we needed a caliphate. Eventually, I started to flirt with ways I could leave Australia to join the fight against foreign oppressors…

Now here is the interesting bit. At the same time Ms Novakovich was getting about covered head-to-foot, yearning to take a number and await the amorous attentions of the heroic bin Laden, she was being feted by politicians who did not have a clue what the recipient of their attentions looked like, let alone believed. No worries! Here was a Muslim who could be useful in papering over then-recent memories of her dreamboat hero’s attacks on the Twin Towers and Pentagon. Why not sling her a trophy salad bowl while using the occasion to lecture the greater public about its knuckle-dragging surmise that radical Islam might just have something to do with, you know, Islam.  Below is a photo of her accepting Western Australia’s inaugural Minister’s Multicultural Ambassadors Youth Award in 2002. 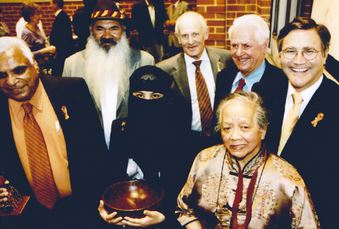 It doesn’t stretch the imagination too much to imagine the minister departing that ceremony for a gathering of feminists, where it is even easier to picture him uttering further hollow pieties, this time against the oppression of women and the imposition of male standards on their dress, assigned roles and comportment. As a fully paid-up member of the Cliche of the Week Club, he would have been every bit as disinclined to recognise that contradiction as to begin searching for traces of breakfast in the beard of fellow award recipient and just-now declared Labor Senate candidate Pat Dodson, who can be seen hovering in the background.

Ms Novakovich’s accolade for her efforts “to increase awareness about the Muslim community”  is worth reading. And do bear in mind that, at the same time she was “involved in Police Cadet training”, she was an unabashed admirer of the man whose disciples murdered some 3000 innocent souls for a morning’s work. The award citation concludes by noting that “Aisha is the Muslim and Youth representative of the State Government’s Anti-Racism Strategy Steering Committee” who “seeks to raise awareness of Muslim culture among the wider community.” Not, presumably, by being candid about her admiration for a Koranically motivated mass murderer.

But wait, that’s not all! Ms Novakovich’s ghost-writer, Fauxfax’s young Beau Donelly, now inspiring the approbation of his fellow Fairfaxians, grasps that Muslims must always be presented as victims, no matter what. As his employer no longer has any editors worthy of the title, this means his text can feature a glaring contradiction without fear of being summoned to the news editor’s desk and asked if he is as stupid as his copy suggests. Here is Ms Novakovich’s account of her experience upon being removed from a secular, mainstream state school and enrolled in an Islamic one:

I had always thought of myself as an Aussie girl with Aussie friends at an Aussie school. The world I lived in was very much part of mainstream Australia and that’s where I felt a strong sense of belonging.

I was bitterly disappointed when I was sent to an Islamic high school. The facilities were run down and staff were unprofessional. The kids were unwelcoming, unlike the non-Muslim students I had grown up with. I felt like I’d been catapulted into an environment that stifled creative expression and contained pockets of deep puritanical ideology.

Just to be clear, her days in the allegedly intolerant belly of Australian society were happy. Her days in an educational Islamic enclave were not. Yet toward the end of the piece we are told:

Growing up in the 1990s, I saw a lot of graffiti that screamed “Asians out” or “Asian invasion”, which made me conscious that I was not white and therefore not welcome.

So Ms Novakovich was “happy in the mainstream” and “felt a strong sense of belonging” yet simultaneously found herself tormented by the thought that she “not white and therefore not welcome.” Go figure that one.

Or better yet, the next time she is in line for the award of a multi-culti Mixmaster or a set of halal flying ducks, let us hope the glad-handers of the intolerance industry also invite a saffroned sampling of those Maribyrnong Buddhists. While they are unlikely to evince much enthusiasm for the Islamic concept of taqiya —  presenting Islamic belief as other than it is in order to gain advantage — they might demonstrate by example that a proven way to lead an untroubled life in Australia is to forego the awards and pleasures of dubious victimhood and all the attention that goes with it.

That, and not keeping a kissable photo of Osama bin laden on your bedroom wall.

The Republic we had to have