Animal activists from PETA staged a rally outside the NSW Premier’s office this morning, unfurling banners featuring a bloody koala on a meat tray and the slogan that “Eating Meat Kills Koalas”. This registered charity targets pastoralists, first because they put meat on our tables and, secondly, because they claim clearing by graziers is destroying koala habitat. Nothing could be further from the truth.

Koalas are an irruptive species —  that is, when applied to animals not quite so cute, a pest. There are many more koalas over a much wider range than there were before pastoralists disrupted Aboriginal burning. They irrupted as a consequence of thickening vegetation. Other more common animals disappeared. Our world-famous mass extinction of small mammals occurred in semi-arid areas where there was no logging or clearing. Thickening vegetation and scrub choked out the delicate and diverse ground flora that had sustained the cute little creatures.

Aborigines ate koalas, but not many because they were actually quite rare. They lived in very low densities in mature forests. Each koala had thousands of trees in its huge home range. They were invisible. Francis Barallier’s Aboriginal guide, Gory, had to pay the high price of two spears and a tomahawk for the back feet of a koala that he had help the locals to catch.

Gory told me that they had brought portions of a monkey (in native language colo), but thy [sic] had cut it into pieces, and the head, which I should have liked to secure, had disappeared. I could only get two feet through an exchange which Gory made for two spears and one tomahawk. I sent these two feet to the Governor preserved in a bottle of brandy.

Paweł Strzelecki, who ate koalas to survive when he got tangled up with dense young scrub in the ranges that now bear his name, was the only explorer who saw koalas. They irrupted in scrub that grew up with the demise of the Gippsland Yowenjerre and their firesticks after the smallpox epidemic of 1789. Explorers especially targeted open grassy country maintained by Aborigines. There were no koalas in this type of country. Pastoralists followed explorers, and they disrupted Aboriginal burning. Koalas followed pastoralists.

The Liverpool Plains – Pilliga region, containing our biggest koala park, is a prime example. This region was thoroughly explored in several expeditions by Surveyors General Oxley and Mitchell during three decades before 1846. They didn’t see any koalas because koalas weren’t there. Famous naturalist, John Gould, the 19th century forerunner of Sir David Attenborough, found a koala amongst the cedar brushes of the Liverpool Ranges in 1840. But, in all his surveys Gould observed very few koalas, and then only in dense forests and after “diligently” searching with “the aid of natives”.

The Pilliga Scrub did not exist at that time. Squatters had taken up country along all the major watercourses in the region by 1848. These pastoralists occupied open grassy valleys. They had no need to clear vegetation. There were relatively few trees and no koalas. The Pilliga scrub grew up after 1878. Pastoralists had destocked and/or abandoned their runs during severe droughts. When wet seasons returned there was no Aboriginal burning, nor domestic stock to control the new growth.

By 1910 koalas had irrupted into unsustainable numbers in the dense young forest, and a fur industry had developed. Koalas overran their new food supply and suffered malnutrition. Foxes and diseases irrupted because weak koalas were easy to catch and prone to infection. The population crashed during droughts around WWI. The
NSW National Parks and Wildlife Service says they were in “exceptionally low numbers” – that is – in their naturally low densities through most of the 20th century.

A second irruption in the Pilliga was also a consequence of dense young eucalypt growth. NSW Forestry Commission had been poisoning and ringbarking eucalypts to promote cypress growth, but the practice was discontinued by the late 1970s. Also, harvesting of small or defective ironbark trees had commenced when the Insultimber sawmill opened in 1975. Dense coppice regeneration provided additional food for koalas.

NPWS falsely claims that “there is no long-term ecological history for the region”, but acknowledges that koalas increased from the late 20th Century. While eucalypt regrowth was booming in the Pilliga, pastoralists and landcare groups were planting corridors and shelterbelts of eucalypts on the Liverpool Plains. Naturally, koalas took advantage of all the new food in the dense fresh growth. Young koalas looking for homes started turning up everywhere. A newspaper featured a photo of one on the bullbar of a fertilizer truck at Gunnedah (below). They follow their big noses to sniff out food high in nitrogen. 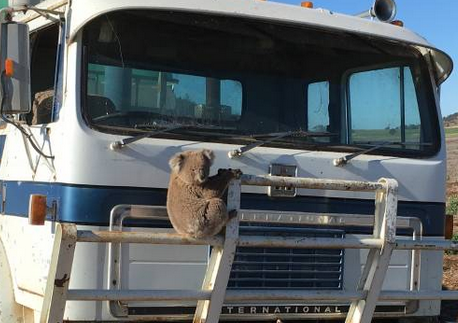 In 2005, just before he jumped the sinking ship that was his government, Premier Bob Carr created NSW’s biggest koala park in the Pilliga. Then the overcrowded population crashed during the Millennium Drought, as it had during extreme droughts a century earlier. Koalas in the new amenity plantings on the Liverpool Plains also crashed, because dense young plantations cannot be sustained in drought-prone areas that naturally carry resilient open woodlands and grasslands. Reserving koala parks does nothing for conservation.

The green bureaucracies and NGOs, such as PETA and WWF, blame climate change, clearing, disease, dogs and motor vehicles for koalas’ supposed imminent extinction. The species is actually in no danger of extinction, but defenceless animals are being subjected to starvation, disease and trauma because they are being used by greens on all sides of politics to pursue antisocial agendas that have nothing to do with human or animal welfare, let alone the conservation of biodiversity. PETA invited NSW’s Environment Minister, Matt Kean, to the circus because he has cynically promised to double koala numbers. The suspicion is strong that his green bureaucrats must have privately advised him that they’re an irruptive species.

Who cares if the cute and cuddlies suffer? The end apparently justifies the means for North Shore Liberals and animal liberationists alike. 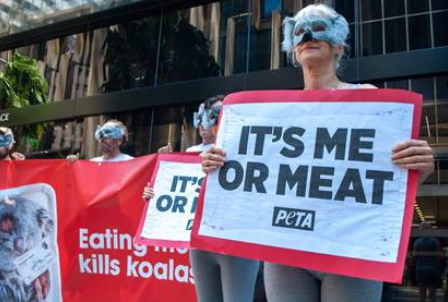 4 thoughts on “On the Whole, Koalas are Smarter than PETA”

The UN Scorns Australia and King Canute too