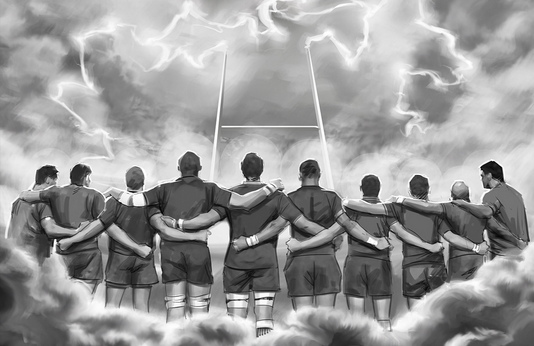 It’s wonderful news that, all of a sudden, Rugby Australia believes in God, Heaven and Hell. Many of us had been under the distinct impression the sport’s administrators and participants were largely indifferent to Christian theology and doctrine. All that was cleared up marvelously when they judged the record try scorer of all time, Israel Folau, to be more immoral than the philandering, drunken, coke-snorters which repeated media reports suggest are found throughout the various Australian football codes.

Folau’s unconscionable crime was that of claiming to know of an objective standard by which Scripture warns all men are measured, a standard accepted and preached for millennia. His refusal to recant such contemporary heresy demanded that the sports administration inquisitors order Folau’s public flogging – not a flogging merely in public, but a flogging by the public one at a time. Qantas, homosexual activists, editorialists and politicians have all in their turn taken up the birch to give Folau a good thrashing.

The sporting champion’s sin was to post on Instagram a list of sins the Apostle Paul says will disqualify people from Heaven, the only alternative as Folau sees it being Hell. It’s remarkable that people who claimed to be indifferent to God and Hell yesterday are no longer indifferent today. That fact is that Folau’s haters are upset by figments of their own imagination. They scream that he is the hater and bigot, but ignore every fact inconvenient to that sensational narrative. As Folau seeks to save the eight varieties of sinners he specifies from Hell, his social media admonition was actually full of compassion: “Those that are living in sin will end up in Hell unless you repent. Jesus Christ loves you and is giving you time to turn away from your sin and come to Him.”

See also: Sin-Binned in the Age of Woke

Of course Folau’s blunt evangelism is less effective than many equally uncompromising but more gently worded alternatives, but it contains not one iota of hate or bigotry. Indeed, only an intolerantly hateful bigot could project hate or bigotry onto that message. It contains a warning of impending harm, based in personal conviction,  and intended to help avoid that harm. It contains unconditional love for all regardless of identity or behaviour. It contains hope and patience for mature, free-will decisions. The only possible objection in the mind of the reader would be the premise that there is actually an objective moral standard which God has ordained. And so, like children told not to play with objects that will harm them, Folau’s detractors made tantrum their first response, the gagging of his views the second, and stern punishment for having uttered them the third.

The message of Easter is that the condition of being a sinner is temporary, prolonged by stubborn pride until, drowning in our sins, we raise our hands and reach out for the Life Saver. There is no discrimination or distinction: we’re all out of our depth.

Folau and Good Friday testify that no one is perfect, we all need a Saviour, and so He generously, sacrificially paid the price with His life so that His perfection could cover our imperfection. The only thing remarkable about a footy player preaching the Gospel is that this is considered an unforgivable offence. Sharing sex videos or being arrested for drunken brawling and indecent exposure warrant slaps and suspensions; preaching against sin is deemed to deserve immediate and absolute banishment.

Mark the hypocrisy with which the world, on one hand, condemns the Bible-thumping preaching of the Gospel by a footy player, and with the other hand mourns the Cathedral of Notre Dame in literal flames. The contrast is remarkable. The world has piously intoned, ‘We reject God’s concerns about us as hateful bigotry; but mourn the temporary flames burning a sanctuary which preached exactly those Scriptures.”

The images of the burning cathedral shadow the choices laid before us every Good Friday and every time Folau opens his Instagram account. We can choose to be outraged that there is an objective standard in Scripture (of which we all fall short); or we can accept the free offer being celebrated once more this Easter of the prescription for salvation from the curse and consequences of sin. Folau said what he believes and said it well enough: we need only turn away from our sin and come to Jesus while His precious gift of time permits.

The message of Israel Folau, Notre Dame and Good Friday is not a personal insult directed at certain hyper-sensitive individuals. It’s not  ‘hate speech’, it’s true-love speech. It’s a universal description of the human condition: hopelessly lost on our own, wondrously saved in the risen Christ. The free-will choice is yours.