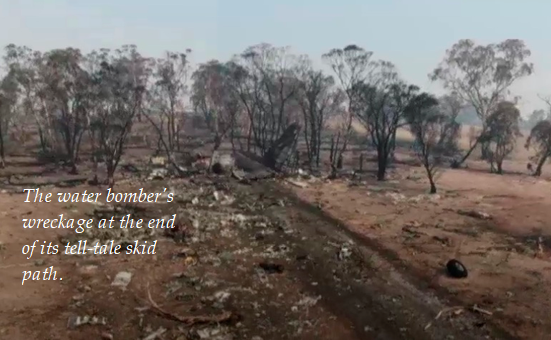 As ATSB investigators probe the loss of the Hercules air tanker N134 during a bushfire drop in January, they will undoubtedly turn back the pages of accident reports into other C-130 crashes. All three American members of the crew of N134, owned and operated by the Canadian Coulson company, were killed in the accident.

The Hercules military transport has been widely used around the world for aerial firefighting, either by air forces or civilian contractors who have undertaken extensive and costly fitouts. More than fifty versions of the aircraft were developed, and the structural strength of the airframe has been improved over the years. In one of the first accidents involving a converted U.S. Air Force plane in 2002, the wings were seen to have folded (watch the video below), then broken off. The fuselage rolled over and crashed upside down. But this was a C-130A model, with a proven weak main spar. Later models have completely re-designed wings.

The most significant crash that Australian investigators will consider is the destruction of a Hercules in South Dakota in July 2012, because it seems to parallel the accident in Snowy-Monaro.  Both aircraft left tell-tale skid marks along the ground before they erupted in flames, as if they had executed a wheels-up landing. In South Dakota, four men died and two crew members in the rear were injured but survived.

The final report of the U.S. National Transportation Safety Board found that a thunderstorm microburst — a vicious downdraft — had caused the aircraft to lose altitude as it made its second drop run. Flying so low, at about 150 feet, it had been virtually pushed onto the ground. The report was critical of the pilots for disregarding warning conditions they encountered on their first run: the plane was sinking despite full power. The lead plane, half a mile ahead, came within ten feet of the ground when it also experienced the microburst, but it did not call off the drop. The Bureau of meteorology graphic below illustrates how severe fires generate their own weather conditions, including a downdrafts (5) that can make it all but impossible to keep a low-flying plane in the air. 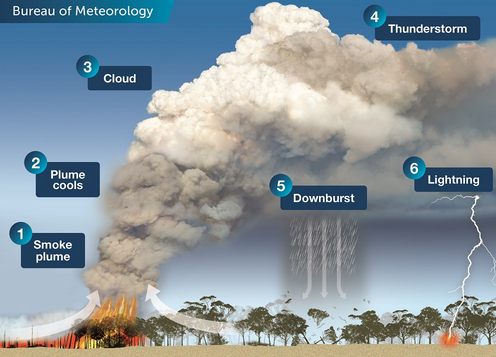 Whether the Coulson Hercules should have been on that mission at all might well come under scrutiny. One experienced pilot who has been involved in aerial firefighting, Juan Browne who operates the ‘Blancolirio’ blog says the wind gusts in the drop zone were as high as 60 miles per hour (100 kph). He asks: “Why were air tankers there at all?” (see Browne’s video below) He points out that the utility of these big aircraft is often limited by visibility, smoke turbulence, rugged terrain, and the fatigue of the pilots. They cannot be used everywhere, all the time.

There is a much bigger question, unrelated to the recent crash: how effective are these air tankers, on a cost/benefit basis. With the enthusiastic stampede to bigger and bigger aircraft, like the NSW government’s $26m 737 airliner (35,000 litres), and the Prime Minister’s rush order of four even bigger DC-10 aircraft (45,000 litres), Australia seems to hypnotised into believing bigger is better. Perhaps they should read veteran forester Roger Underwood’s essay at Quadrant Online, “The Bushfire-Industrial Complex“.

These planes all require major airfields as their bases, meaning long flight times to reach the fires. (In New South Wales they operate from RAAF Richmond on Sydney’s outskirts, in Victoria from RAAF East Sale). How sensible (or effective) was the Hercules mission from Richmond,  two hours to the Snowy to drop one load of 11,000 litres of retardant?  And how sensible is it to fly these big aircraft so close to the ground when they are so unmanoeuvrable and depend on a lead aircraft to “see” for them?

Geoffrey Luck, a veteran pilot, was an ABC journalist from 1950 until 1976. In an earlier article  he recalled how inexperience and power lines very nearly cost him his life

Paying People to be Responsible

For the left, only myths and monsters remain

We’ll Beat COVID, or so They Keep Saying