“Hayek’s got Inflation by the balls”

Ron Kitching’s famous photo of F.A. Hayek and Kitching’s bull Inflation (it kept on growing) is now over 32 years old.

Hayek was visiting Australia and staying at the Kitchings farm on the Atherton Tablelands. Ron wanted the famous economist to climb a stepladder onto Inflation’s back to be photographed as “Hayek’s on Top Of Inflation.”  Mrs Kitching objected. She wouldn’t allow him to risk the safety of their 76 year old visitor.

Nevertheless Hayek still wanted to meet the bull. Next day I took him down the paddock and took several pictures of him and the bull when another idea popped into my head and I quietly mentioned it to him. He was delighted to have a bit of fun. The caption of course was to be "Hayek’s Got Inflation By The Balls".

Well the old boy was delighted. He was quite at home with animals and had palled up with the bull, which was an easy matter with this particular animal. So he posed and I took the picture. He predicted that if the Americans got hold of a copy, the picture would  become famous.

Years later a copy (with caption) was presented to Margaret Thatcher. 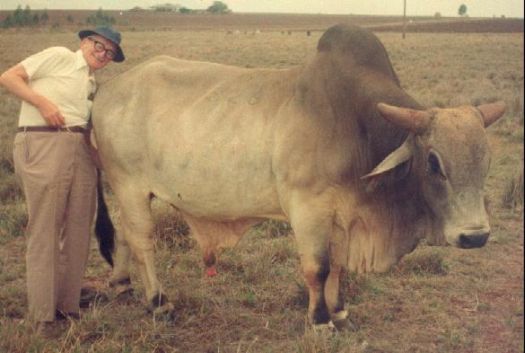 Read Ron Kitching’s own account of how the month long visit of the Nobel prize-winner to Australia was arranged in 1976 – and how he introduced the great man to Inflation.

Australiaphobia – the movie not by Baz Luhrmann