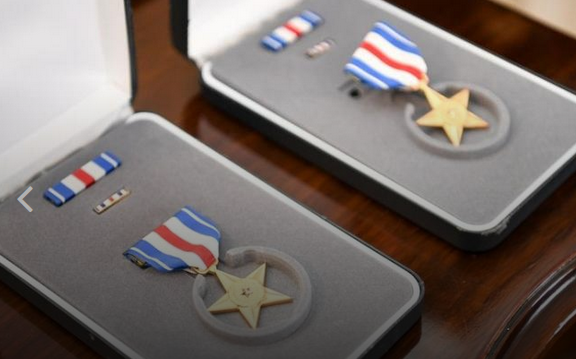 Their ABC hit a new low last week. ABC flagship 7PM TV news bulletins on December 14 included an insulting reference to two Australian war heroes in the Vietnam conflict as working “for their American masters”. See it here at 16 minutes on the Victoria bulletin.

The insult was aired on bulletins for Victoria, Queensland, SA, ACT, NT and ABC Late News.[1] 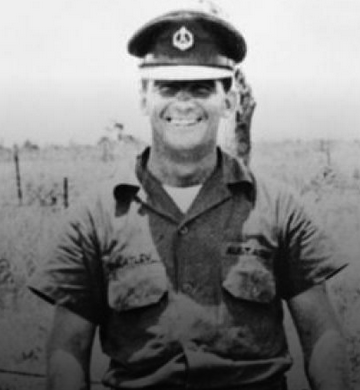 The heroes operating “for their American masters” (in ABC-speak) are the posthumous VC winner Warrant Officer Kevin Wheatley (left) and Group Captain (rtd) Macaulay Cottrell, a forward air controller. Wheatley’s son, George, and Cottrell himself received long-delayed Silver Star medals at a US Embassy function in Canberra on the same day the gratuitous slur went to air. The Silver Star is America’s third-highest bravery medal.

Soon after his 1965 posting to Vietnam, Wheatley noticed a three-year-old girl running amid crossfire. He ran and brought her back to safety, shielding her with his body. In August he was commended for the US decoration based on single-handedly reviving an uphill assault against a Viet Cong-held village.

Then, in November 1965, he was with a Vietnamese Civil Irregular Defence Group company attacking a Viet Cong village. His fellow Digger, Ron ‘Butch’ Swanton, was shot in the chest. The Viet platoon around Wheatley broke and scattered, leaving Wheatley exposed to heavy automatic fire. Although told that Swanton couldn’t survive, he refused to seek his own safety, dumped his radio and drag-carried Swanton 200 metres to cover. When the Viet Cong came after them and were only 10 metres away, according to the citation

He was seen to pull the pins from two grenades and calmly awaited the Viet Cong, holding one grenade in each hand. Shortly afterwards, two grenade explosions were heard, followed by several bursts of fire. The two bodies were found at first light next morning after the fighting had ceased, with Warrant Officer Wheatley lying beside Warrant Officer Swanton. Both had died of gunshot wounds.

The citation spoke of his magnificent courage and unflinching loyalty.

I complained to ABC Audience and Consumer Affairs at 1.51pm on Friday, December 17, about the ABC’s “American masters” insult to Wheatley and Cottrell. An hour later at 3pm, complaints head Kirsten McLiesh responded,

ABC News apologise for this choice of words and acknowledge it has caused offence. A post has been made on the ABC’s Corrections and Clarifications page

The ABC had put up a correction the previous day:

Silver Star medals
News: On 14 December, ABC News presented a story about two Australian soldiers who had been awarded military honours by the United States for exceptional valour in combat. The story closed with an observation that there had finally been ‘recognition of brave deeds performed by two Aussies for their American masters’. ABC News regrets this choice of words and acknowledges it has caused offence. Australians fought alongside Americans as allies in the Vietnam War.

I am bewildered that this blatant propaganda was promulgated by [ABC Canberra Bureau reporter] Craig Allen and endorsed by the whole news team including sub-editors, producer and newsreader. The print version has been corrected but this live TV version has no correction.

It is a particularly vile insinuation in respect of our soldiers who put their lives on the line in OUR national interest.

Please correct it and ensure my complaint is included in the 2021-22 ABC annual report. I would also appreciate some explanation for how this gross violation of the ABC Charter [for impartiality] was permitted on the flagship 7pm TV news.

We have reviewed the story and sought and considered comments from ABC News. The intent of this story was to recognise the remarkable courage and contribution of these two Australian soldiers who had served in US military units in the Vietnam War, reporting to US commanders. It was this chain of command relationship that the story sought to convey in its closing observation that the award of these military honours was a ‘recognition of brave deeds performed by two Aussies for their American masters’.

It says something about ABC green-Left groupthink that the insulting words were passed for inclusion by all those running the flagship 7pm TV news in Canberra, Vic, Qld, SA and NT. Are these bulletins not checked by senior ABC news managers, as would be the case in any decent, well run newsroom? So one must assume in light of all the lower apparatchiks — reporters, subeditors, video people, pretty-faced anchors reading TelePrompters — who saw nothing amiss in the cheap “American masters” shot.[2]

Much online vitriol has been directed against Canberra ABC reporter Charlotte Gore, whose byline was on the ABC on-line report.[3] She replied to one critic:

The ABC Canberra newsroom regrets the choice of words in our television coverage of this story, which can be seen here:

So you are aware, I at no point in any version of my online story used this phrasing.

I had no involvement with the television script which included this choice of words.

I checked all versions of her ABC print story via Wayback Machine, the internet’s archive, and confirmed Ms Gore had never written “American masters”. On December 20 I got through by email to her bureau’s Craig Allen who replied, with commendable fortitude,

The words were mine, and mine alone. Best wishes, Craig.

Blogger Michael Smith is a four-year police officer and an eight-year army veteran with a big following among other veterans. He opened his attack on the ABC on December 16 with a post headed, ‘ABC News. You filthy dirty bastards. Lest We Forget’ saying

No Aussie dig fought ‘for American masters’. You ABC dogs.

I know several Vietnam Vets who fought and when they returned were treated like scum. Many are still suffering from the after effects both physically and mentally and each time one of their mates passes, their pain is renewed.

I hope none of them saw this ABC programme as their wounds would once again be opened. Never been a woman who swears but: ABC, UNPATRIOTIC BASTARDS.

Everything the ABC does is done with the intention of offending. I’m sure they believe anyone who fought against communists must be punished. Whatever it takes.

Shame on the ABC the Enemy at home of all former and serving ADF personal. You unpatriotic Bastards.

A couple of very carefully chosen words to further push the progressive agenda and demean the ANZAC spirit.

Looking further into Craig Allen’s piece to air, it generally mined the US Embassy press release, but he also chose to google up and include a jab at the Menzies government:

Kevin Wheatley was killed in Vietnam. A begrudging Australian Government would not even fly his body home for burial. It fell to the grateful public to pick up the tab.

While that is true, Allen didn’t add that Harold Holt’s Coalition government corrected the policy a year later. He ended his piece with the “American masters” line.

Whoever put that last line in, along with whoever approved it, should be instantly sacked.

If Allen were to go, some might argue another 20-or-so ABC line managers at Ultimo headquarters and most states, starting with the acting director of news, should perhaps go with him.

(Editor’s note: While it might surprise some, there really is a minister whose job it is keep an eye on the ABC. His name is Simon Birmingham.)

[1] In other States the medal item was crowded out by a climate piece falsely claiming US tornados have been on a long-term increasing trend. https://wattsupwiththat.com/2021/11/21/below-normal-extremes2021-northern-hemisphere-cyclone-activity-below-normalus-tornadoes-below-normal/

[2] ABCTV promotes the fiction that its newsreaders are “real journalists”. This episode demonstrates that they aren’t.

12 thoughts on “Smug Slurs from the ABC Sewer”