News the ABC Doesn’t Think You Need to Know 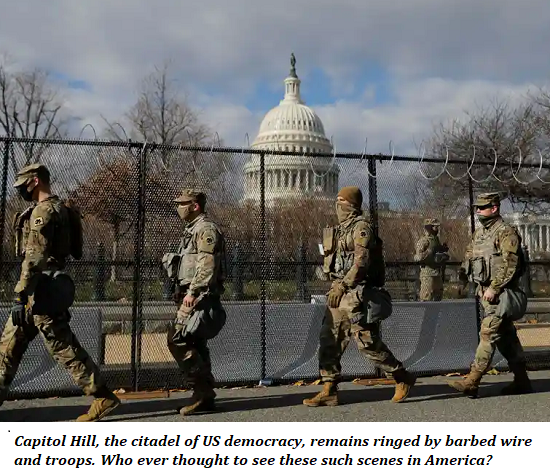 All the news that fits the narrative — that has long been the ABC’s guiding editorial principle, and few items made that more clear than the selective eye the national broadcaster brought to bear on certain US military leaders and their low opinions of Donald Trump.

If a braid-encrusted admiral or general had a bad word about the former president, the ABC played it big.  Retired US Navy admiral William McRaven defended exposed liar and Russiagate hoax promoter John Brennan and the ABC gave him banner treatment. Likewise, lots of ABC sympathy for former national security agency director Michael Hayden, who was stripped of his security clearance for siding with James Clapper, another much-quoted ABC favourite, about the alleged danger Trump represented to America’s security. Retired four-star general Stanley McChrystal and sacked defence secretary Jim ‘Mad Dog’ Mattis also had their gripes about Trump given prime placement. Then there was Colin Powell and John Kelly, former generals, Trump critics and both presented by the ABC as voices of decency and good sense, unlike the then-occupant of the White House.

When a senior military man assails the sitting president, it must be big news. Right? Well that would seem to depend on which party controls the White House and who is doing the criticising. Scour the ABC’s recent archives for reports of not one or two Pentagon veterans but 124 of them criticising the current US President and your ABC search will come up empty.

For the record, and without the benefit of the ABC’s billion-dollar-plus annual budget, Quadrant Online below reprints an open letter detailing the signatories’ grave concerns about Joe Biden, his presidency, ability to govern and, perhaps most worrying, his deteriorating mental faculties.

The opinions of one or two former brass is big news if Republican Trump is the target of their spleen. Ten dozen-plus doing the same about Democrat Biden and … crickets.

During the 2020 election an “Open Letter from Senior Military Leaders” was signed by 317 retired Generals and Admirals and, it said the 2020 election could be the most important election since our country was founded. “With the Democrat Party welcoming Socialists and Marxists, our historic way of life is at stake.” Unfortunately, that statement’s truth was quickly revealed, beginning with the election process itself.

Without fair and honest elections that accurately reflect the “will of the people” our Constitutional Republic is lost. Election integrity demands insuring there is one legal vote cast and counted per citizen. Legal votes are identified by State Legislatures’ approved controls using government IDs, verified signatures, etc. Today, many are calling such commonsense controls “racist” in an attempt to avoid having fair and honest elections. Using racial terms to suppress proof of eligibility is itself a tyrannical intimidation tactic. Additionally, the “Rule of Law” must be enforced in our election processes to ensure integrity. The FBI and Supreme Court must act swiftly when election irregularities are surfaced and not ignore them as was done in 2020. Finally, H.R.1 & S.1, (if passed), would destroy election fairness and allow Democrats to forever remain in power violating our Constitution and ending our Representative Republic.

Aside from the election, the Current Administration has launched a full-blown assault on our Constitutional rights in a dictatorial manner, bypassing the Congress, with more than 50 Executive Orders quickly signed, many reversing the previous Administration’s effective policies and regulations.Moreover, population control actions such as excessive lockdowns, school and business closures, and most alarming, censorship of written and verbal expression are all direct assaults on our fundamental Rights.

We must support and hold accountable politicians who will act to counter Socialism, Marxism and Progressivism, support our Constitutional Republic, and insist on fiscally responsible governing while focusing on all Americans, especially the middle class, not special interest or extremist groups which are used to divide us into warring factions.

# China is the greatest external threat to America. Establishing cooperative relations with the Chinese Communist Party emboldens them to continue progress toward world domination, militarily, economically, politically and technologically. We must impose more sanctions and restrictions to impede their world domination goal and protect America’s interests.

# The free flow of information is critical to the security of our Republic, as illustrated by freedom of speech and the press being in the 1st Amendment of our Constitution. Censoring speech and expression, distorting speech, spreading disinformation by government officials, private entities, and the media is a method to suppress the free flow of information, a tyrannical technique used in closed societies. We must counter this on all fronts beginning with removing Section 230 protection from Big Tech.

# Re-engaging in the flawed Iran Nuclear Deal would result in Iran acquiring nuclear weapons along with the means to deliver them, thereby upsetting Mideast peace initiatives and aiding a terrorist nation whose slogans and goals include “Death to America” and “Death to Israel”. We must resist the new China/Iran agreement and not support the Iran Nuclear Deal. In addition, continue with the Mideast peace initiatives, the “Abraham Accords,” and support for Israel.

# Using the U.S. military as political pawns with thousands of troops deployed around the U.S. Capitol Building, patrolling fences guarding against a non-existent threat, along with forcing Politically Correct policies like the divisive critical race theory into the military at the expense of the War Fighting Mission, seriously degrades readiness to fight and win our Nation’s wars, creating a major national security issue. We must support our Military and Vets; focus on war fighting, eliminate the corrosive infusion of Political Correctness into our military which damages morale and war fighting cohesion.

# The “Rule of Law” is fundamental to our Republic and security. Anarchy as seen in certain cities cannot be tolerated. We must support our law enforcement personnel and insist that DAs, our courts, and the DOJ enforce the law equally, fairly, and consistently toward all.

# The mental and physical condition of the Commander in Chief cannot be ignored. He must be able to quickly make accurate national security decisions involving life and limb anywhere, day or night.Recent Democrat leadership’s inquiries about nuclear code procedures sends a dangerous national security signal to nuclear armed adversaries, raising the question about who is in charge. We must always have an unquestionable chain of command.

Under a Democrat Congress and the Current Administration, our Country has taken a hard left turn toward Socialism and a Marxist form of tyrannical government which must be countered now by electing congressional and presidential candidates who will always act to defend our Constitutional Republic. The survival of our Nation and its cherished freedoms, liberty, and historic values are at stake.

We urge all citizens to get involved now at the local, state and/or national level to elect political representatives who will act to Save America, our Constitutional Republic, and hold those currently in office accountable. The “will of the people” must be heard and followed.

The full list of the letter’s signatories can be inspected here.