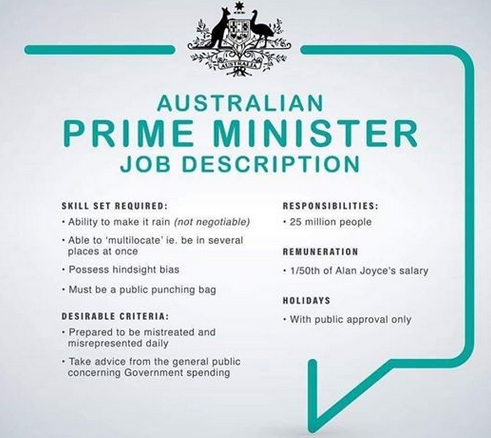 The depths to which ABC journalism has sunk is dramatically laid out for all Australians to see  on the Prime Minister’s website.

On January 4, as media excitement about Scott Morrison’s supposed incompetence threatened to exceed actual coverage of the NSW and Victorian bushfires, the Prime Minister found time for lengthy interviews with 2GB and the ABC.  It was the day he announced the call-up of reservists and the allocation of extra funds for extra water bombers. His Media page, which records daily the transcripts of his major interviews without fear or favour, reveals the following contrasting approach. 2GB was obviously seen as friendly territory as the interview began:

PM: G’day Luke, and mate, thanks for the work you guys are doing today. It’s a very difficult day, particularly all around the state, but a lot of the other areas you’ve just been talking about as well. So, you know, thanks for helping people today and all your listeners.

No such atmosphere on ABC News Radio, as Sandy Aloisi began (after a lengthy summary of the government’s plans for troops and more funds):

A welcome announcement of these extra resources, but why has it taken so long to do that?

Mr Morrison explained that for weeks the role of the Defence Forces had been increasing, but now there was a new phase. “Previously we’ve asked for requests, now we are just moving in and then integrating with the local command and what’s taking place on the ground.”

Aloisi: But did you need a disaster announcement (by Victoria) to make you aware of just how serious the bushfire crisis was in Victoria, and of course, in NSW?

PM: Well, of course not…..that’s why we’ve had Defence Force people deployed since September of this year. We’ve been supporting the emergency services and firefighting efforts by the states and territories now for many months, and we’ve had 2,000 people involved in that.

Aloisi: (Not listening, but following the ABC prerogative to cut in): “I’m sorry to interrupt you, you’ve only announced the up-scale of that this afternoon. Why has it taken so long?

PM: Well no the upscale has been occurring now for several weeks.

Morrison went on to explain that ADF personnel had been directly deployed into the incident response centres in towns across NSW and Victoria. But nothing he could say would divert Aloisi from her pre-determined attack. This is how the interview progressed:

Aloisi: But Prime Minister, were you not warned of the scale and the extent of this bushfire season as far back as last March?

and then came this

Aloisi: Prime Minister, I spoke to [Labor MHR] Susan Templeman, the federal member for Macquarie. She has a home at Winmalee in the Blue Mountains and is playing that awful waiting game that so many people in those bushfire areas are playing. She says you visited the area in December, in early December. You were told then by people, residents, that the bushfire season that was coming was going to be a very tragic one unless something was done. She asked this afternoon why something wasn’t done after those conversations.

PM: Things were happening even then [interrupted again]–.

PM: I can’t help it if Susan Templeman isn’t aware of all the things that the ADF were doing at the time. I think it’s very important that at times like this, it’s not a time for point scoring. It’s just a time of getting things done.

Aloisi: I think Susan Templeman really epitomised what many people on the fire grounds are feeling this afternoon, and that is that they really don’t feel like there’s any there’s been any leadership in this bushfire crisis.

You’re aware of the criticism yourself. What do you say to that?

Aloisi by now was in full cry. It was entirely predictable that footage of the PM being abused by  foul-tongued bush ferals, complete with piercings, mohawk mullets, Led Zeppelin T-shirts and a goat on a rope would be cited. The ABC presenter didn’t disappoint.

Aloisi: Prime Minister, why then do you think you’ve been heckled when you visited various fire grounds and people have really asked you not to come back unless you can provide further resources?

Aloisi: And I think they were angry and upset at you, Mr Morrison.

PM: Were you there?

Aloisi: Well no, I wasn’t. I saw the vision.

Aloisi: So finally, Prime Minister, do you feel you can look Australians in the eye this afternoon and say, ‘I have done my best for you as your Prime Minister? As far as this bushfire crisis goes?’

Over on 2GB, Luke Grant handled the same basic material this way:

Grant: Now this morning you’ve come to a conclusion that we need to send reservists to some of these fire zones. I think the number PM is about 3,000. How soon will they get there and what can they do to help?

The 2GB compere received a very detailed answer on what the 3,000 reservists will be doing, Morrison no longer making the important point that the Commonwealth was not waiting to be asked for assistance – it was proactively stepping in. For those who could understand, he was saying diplomatically that NSW had failed to ask for military help, as had Victoria.

There was a sensible question about what might happen in February and March, but after a straightforward interview, in which he extracted detailed information, Grant spoiled it with a bumbling sycophantic final question:

Grant (in part): You wouldn’t be a human being if you didn’t walk in there as a Prime Minister just offering support and help and to hear that response and not think yourself, you know what a people expect me to do, as you’ve said before, you don’t hold a hose. If you get asked to do something, you do it. In my experience, I think what you’ve done today is brilliant. You’ve answered the calls of the other states, but as a human being, you hear that, it’s got to affect you PM?

With its aggressively opinionated interviewing and manifest hostility for the Morrison government and ubiquitous insertion of a “climate change” theme into every fire and weather story, the ABC is demonstrating every day what a sad caricature it has been allowed to become of the news organisation it once was. The above exchange leaves no doubt about that.

The Media is the Massage