The ABC: Perfect in Every Way

Back in March, ABC Editorial Director Alan Sunderland decided to do his bit for colleagues’ morale with a little video hailing the national broadcaster as the magnificent institution he would like everyone to believe it really is. Quadrant Online transcribed this extraordinary effort and presents it below. As certain things aren’t mentioned — appallingly inaccurate and terminally biased reports, for starters — we couldn’t resist providing some background and links.

Read on to see what Mr Sunderland had to say — and what he didn’t say. Quadrant Online’s thoughts are in italics. 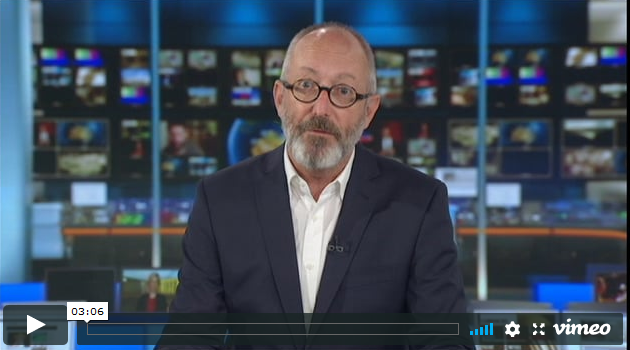 Unless and until the ABC takes it down, Sunderland’s turn before the cameras can be viewed here.

There are plenty of suggestions floating around at the moment that the ABC is bowing to government pressure and failing to do its job. You’ve probably read some of the stories and a few of you may even be thinking the same thing. These articles talk about pre-emptive buckle, that we self-censor to make sure we don’t annoy the government and we’re cowering in the face of budget cuts.

Plenty of suggestions, eh, Al? Well, yes, there have been some, but they’ve come from either the feral or taxpayer funded left – sites like The Conversation and New Matilda. Are these your preferred sources, Al? That would explain a lot about the ABC’s perspective.

One thing is true: this is a sensitive time for the ABC .

Why so “sensitive”? If you set about your job with a straight bat, without fear or partisan favour, as your Charter insists you must, what is there to worry about?

Discussions are about to begin with the government about funding arrangements for the next three years. There have been inquiries into our regional operations, …

The ones you’ve been shutting down anyway, you mean, to redirect resources to activities you rate more worthy than keeping Wagin, Port Augusta, Nowra, Morwell and Gladstone informed. You shuttered those bush bureaus in 2014 under no instructions but your own.

[and] into how fair and balanced we are.

Better check with ACMA about that “balance” thing. Or, if the details of your chief political correspondent’s anti-Abbott editorializing are just too embarrassing, ask around in-house about that idiosyncratic economist Emma Alberici’s spectacularly flawed insights. You can read her original and re-written articles here, with corrections. “Balanced” they weren’t.

And soon into our competitive neutrality, which means how we operate alongside our commercial media colleagues.

Colleagues? You mean the hundreds of non-ABC journalists and others laid off while your employer invades their former publications’ for-profit turf.

So, with all of that going on, some people are wondering if the ABC is pulling its head in for a little while.

Again, don’t spend so much time reading New Matilda. Instead, read what your boss, Ms Guthrie, had to say only last week:

“… In the coming year, Australians will head to the polls for the next election. More than 80 per cent of Australians value the ABC, a point that shouldn’t be lost on anyone seeking government.”

That’s not pulling your head in, Al. That’s threatening a government with grief unless it hands over all the taxpayer cash to which you and she think your ABC is entitled.

I’d like to respond clearly and simply to that. It’s time to come clean.

Everyone has to start somewhere. Only 11 more steps to go.

As the editorial director of the ABC I want to be honest with you and tell you from my own perspective and in the view of the managing director, the chairman, the board and that of the whole leadership team what precisely we intend to do differently – just for a little while, just until we get our funding sorted and make it through the rest of the year. I want to talk about how our journalism might have to change in response to all this pressure. So here goes.

Come on, Al, get to the point. Leave the drama to whichever ABC mate bagged the latest production cheque for a series about an Aboriginal superhero and a much-discriminated-against race of metaphoric hairies. Oh, that’s right, you’ve done that one already!

Better focus on the upcoming series about the woman who talks to her vagina.  Now that’s entertainment!

This is what needs to change about our editorial approach during these risky and sensitive times: Nothing.

As Jon Faine virtually admitted just this week, and as your colleague Gaven Morris also once noted, the “B” in ABC stands for “biased”. “Lots and lots of people, who are on the conservative side of politics listen to the ABC and are constantly annoyed at what they hear,” was the way Faine put it, accurate for once.

Now that might be a little high-level, broad-brush summary, so let me break it down for you in a little more detail.

When it comes to our journalism and the way our programs examine the community we live in, we’re here to observe, to report, to inform and to analyse.

Like Zoe Daniels reports what her primary-school kids think of Donald Trump?

Like Catalyst informed heart patients that the drugs their doctors prescribe are doing them no good at all?

Like Steve Cannane’s misleading analysis of UK conservatives’ rejection of coal, which somehow omitted all reference to the country’s rather important nuclear plants.

We’re here to provide a voice for a range of different perspectives.

Quick, better fetch some climate sceptics for the cameras.  They’re thin on the ground in your talk shows, news bulletins and current affairs. When they are invited, it’s to be abused.

It was certainly a challenge for Steve Ciobo when you brought in convicted terrorist Zaky Mallah – drove him in and drove him home, if you remember – to bushwhack the minister on live TV with a question prepared and polished by your producers.

That doesn’t always win us friends, but it’s important work.

Good work if you can get it, Al. Your mate Gaven Morris, who has been complaining about the ABC not having two pennies to rub together, was pocketing $213,210, as of the end of 2013. Kirsten Aiken, his wife and a presenter on News 24, would be on a good screw too. Whatever else might be said of your ABC, it cannot be faulted for supporting family values, as this list of your partnered and cashed-up colleagues attests:

Heather and Barrie,
Virginia and Russ,
Tony and Sarah,
Louise and Nick,
Ross and Samantha,
Tracey and Stan,
Peter and Debbie,
Jo and Bruce,
Brigid and Tim,
Mike and Paula,
Fran and Marion,
Jessica and Nick,
Benjamin and Scott,
Tamina and Muhamad,
Paul and Lisa
Gaven and Kirsten

A few two-bonus families in there, Al?

It’s our job and it’s the reason why we’re valued and trusted by over 80% of Australians.

We keep hearing about this 80% business, but is that really a telling metric? How about, for another perspective, you take the budget of, say, Tonightly and divide it by the number of viewers, which would illuminate how much it costs to attract a really, really small audience.

You might also count the number of f***s and c***s in order to calculate obscenities-per-dollar.

By the way, do you ABCers use that sort of language in conversation with Ms Guthrie? Heavens above, surely she doesn’t employ obscenities as a form of punctuation! Or maybe she does. Is that why she reckons its fit fare for Australian livingrooms? Is it why, when Minister Mitch Fifield complained, he received a reply from some patronising twerp to the effect that it was “comedy” , the implication being that he should do some work on his sense of humour.

We’ve never buckled to pressure or pulled our punches in the past and we’re not about to start now.

Ex-ABCer Jon Stephens, the bloke who molested an ABC child performer in a Gosford motel room paid for by the ABC and while on assignment for the ABC, hasn’t had a glove laid on him. Indeed, as Gerard Henderson has noted repeatedly, his conviction has never been mentioned by your newsreaders.

So, shouldn’t that be ‘never pulled our punches except when we find it convenient to avoid embarassment?’

Now, of course, we have to get it right. We have to be accurate and impartial.

Live-cattle exporters, RAN sailors, Darwin youth-detention guards and, most recently, Tony Abbott would like to see a dash of that accuracy  of which you speak.

And if we get things wrong we need to fix it quickly and transparently and learn from our mistakes.

Did you see Media Watch last week? Even Paul Barry takes you to task for not reporting the ACMA ruling on Andrew Probyn’s editorializing about Abbott. “Quickly and transparently” must have a different meaning at Ultimo and Southbank.

But then we have to get on with the job, supporting each other and standing behind the public interest journalism we’ve always been known for.

Geoffrey Luck, a former ABC bureau chief, discovered what “supporting each other” means when he wrote to complain about a report and was told to drop dead by a functionary who didn’t like his tone. A neat, supportive way to make sure an ABC colleague didn’t have to answer embarrassing questions about, as Geoffrey put, his “travesty” of a report.

So we should all be united in this common endeavor, no matter how much the going gets tough. It has been tough and it will be tough.

When the going gets tough, the tough get … evasive, arrogant, selective, defiant and threatening.

But it’s good sometimes to remember why we’re here,

to be proud of what we do and to enjoy ourselves along the way.

Wanted: New Ringmaster for the ABC