That Q&A compere Tony Jones is the snide, self-satisfied essence of bias and smuggery has long been the view of those who watch the program from the right side of the sofa – an impression disputed, of course, by the show’s green-left admirers, supporters and staffers. Thanks to Ray Martin and Shaun Brown, commissioned by the ABC to report on the show’s balance (or lack of it), that matter has been settled once for all.

Below, excerpts taking Jones to task from the duo’s 108-page report. These may come as a surprise to those who have read only summations of the document in the mainstream press, which tended to emphasise the show’s overall clean bill of health and the authors’ recommendation that more women and Greens are needed to “balance” the weekly panels.

And just a few of the cited examples: 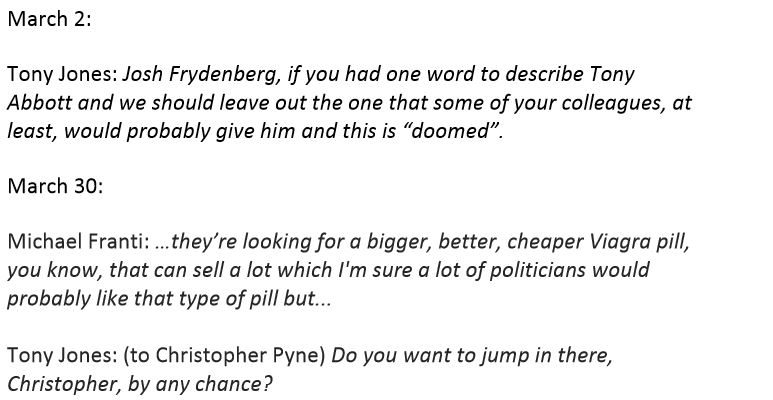 And then there is this wisecrack, which invokes the loony-left meme that Tony Abbott was an illegitimate prime minister because he is not a bona fide Australian citizen. Needless to say, it drew immediate applause from an audience Martin and Brown insist is never stacked. No, not at all.

Despite all this, Martin and Brown manage no more than a mild rebuke, observing 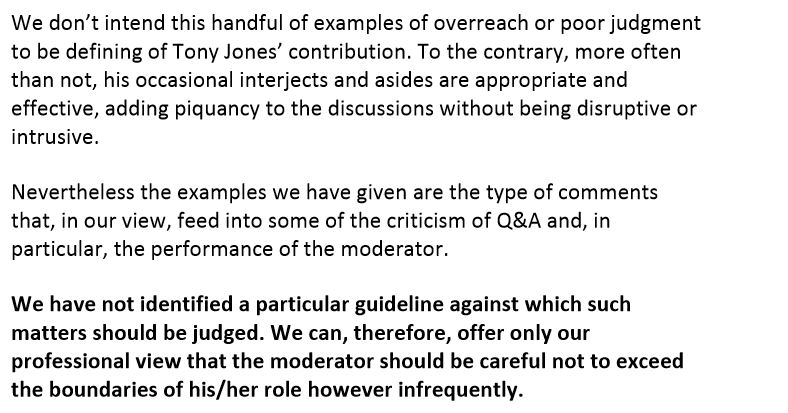 What makes this oh-so-gentle verdict curious – indeed, allows it to be uttered with a straight face – is a bizarre passage atop the section dealing with Jones’ serial indiscretions.

The show in question was the one that went to air one week after the Zaky Mallah debacle. Martin and Brown neglect to provide the slightest context, nor do they quote the Jones comment that prompted Tim Wilson’s spirited rebuke. It is a curious omission, but perhaps an innocent one: Ray Martin might still have been jet-lagged from his fact-finding mission to London, which was part of his investigation (as noted on page 3). No details of Martin’s ticketing – first-class or business? – are available, nor are they likely to be. Quadrant Online’s efforts to ascertain the total cost of the report and the fees its authors received have been rebuffed.

View the show in question – available via the following link at the Q&A website — and the context missing from the report becomes instantly clear. In the to-and-fro about religion informing morality, Wilson says “People are entitled to their views”

At that point, Jones ponderously and pointedly rolls out the words “…when you say people are entitled to their views…” The audience gets the gag immediately, laughing uproariously at what is a clear and specific reference to the Zaky Mallah incident of seven days earlier. For those interested, the relevant section of the video comes at around the 50-minute. The relevant section of the ABC transcript is below: 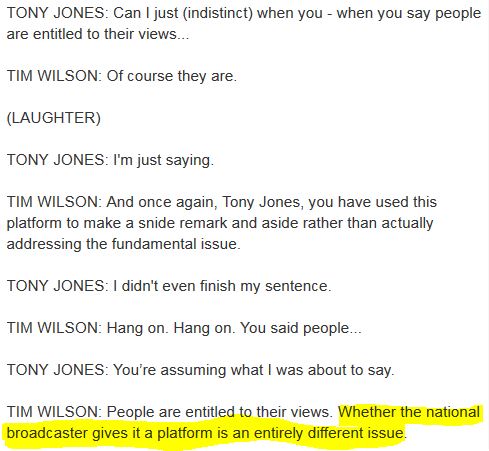 Somehow, even though the highlighted words in the transcript above reference the Mallah business and resulting furor, Martin and Brown don’t bother to frame the exchange. Indeed, they side with Jones, saying

Now that the ABC has a fresh and incoming managing director, Michelle Guthrie, optimists might incline to the view that, in regard to bias, cronyism, nepotism, secret contracts and mates giving the tick of approval to mates, the national broadcaster might see a turn for the better. It would be nice, for example, if the ABC were to reveal how much it pays its jet-about consultants, not to mention how they are selected in the first place.

But that would optimists. Realists will manage no more than a scoff.

Roger Franklin is the editor of Quadrant Online. Should the ABC need further auditors, he is available to investigate, but only if premium-class international travel is laid on and a lovely six-figure fee guaranteed.

This Was a Fair Trial?