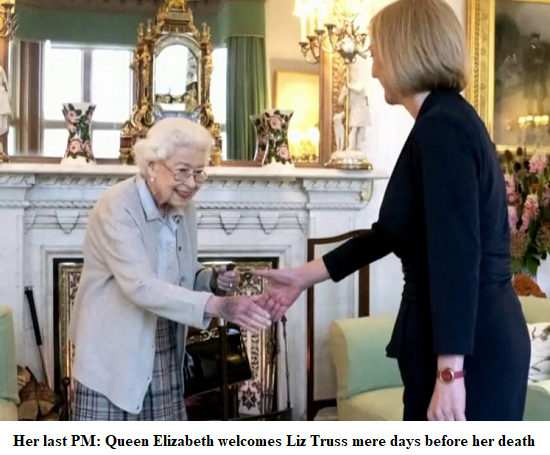 It was the inevitable event we all knew would happen — for all men are mortal — but which somehow we could not imagine would actually take place. The death of the Sovereign after a reign of seventy years is the end of an epoch but also a personal event, not just for the royal family but for the citizens of each realm in which Elizabeth II was Queen. Every member of my parents’ generation in New York can remember where they were when they learned that John F. Kennedy had been assassinated. For my generation, it was the attack on the World Trade Center. For a younger generation as well as everyone older, we will all remember where we were when it was announced that Queen Elizabeth II had died at Balmoral.

Here in London, I was at one of our soup kitchens where we feed some seventy to eighty homeless or hungry guests every week, run under the auspices of the Order of Malta, a 900-year-old Catholic religious order that undertakes charitable activities across the globe. The principal chaplain of the British branch of this somewhat aristocratic body is a gruff, earthy, working-class monsignor from the East End who, sleeves rolled, joined me in the kitchen for the washing up. A text message alerted him to the Queen’s death. He crossed himself and passed the news on to the head of our volunteers who braved the rostrum of the parish hall and announced, “I’m afraid I have some very sad news.” The parish priest led us in a prayer for the repose of the Queen’s soul, but the moment really hit home when he added “and for the King”.

The King. Somehow these two short simple words encompass everything — with every end comes a beginning. Legally the Crown is eternal and undying; the Demise of the Sovereign (demise still pronounced in the French manner) merely marks the end of one reign and the start of another. The moment the Queen died, the King acceded—and an entire apparatus of planned actions kicked into gear. From Balmoral, the late Queen’s Private Secretary immediately passed the news on to the Prime Minister, the Privy Council Office, the Lord Chamberlain, the Archbishop of Canterbury, the BBC (and other broadcasters), and the member of the Royal Household responsible for liaising with the armed forces, which immediately activated Operation London Bridge (the Queen’s funeral) and Operation Unicorn (in the event of her dying in Scotland).

The governments of the fourteen other realms of whom Elizabeth II was Queen — Australia, of course, included — are informed directly, while the Foreign, Commonwealth and Development Office informs the other Commonwealth or foreign states. (The FCDO also informs the government of the Republic of Ireland, which has a unique status in UK law in that despite having left the Commonwealth it is not a “foreign” country.) The Home Secretary informs the Lord Mayor of London and requests that the Great Bell of St Paul’s Cathedral be tolled for two hours. (In 1901, the Lord Mayor ceremonially read out the telegram he received from Edward VII informing him of the death of Queen Victoria from a window of Mansion House.)

The first great act of the new reign was for the Privy Council to meet at St James’s Palace and proclaim the new sovereign as king. The Accession Council (as this is known) is in some sense the descendant of the ancient Saxon witanmoot that elected and affirmed the kings of old. The then-prospective event was thrown into controversy earlier this year when the Privy Council Office announced it was restricting which Privy Counsellors would be invited to attend. When Elizabeth II acceded in 1952, there were 281 Privy Counsellors, of whom 175 attended. Owing to the longevity of her reign and the regular changeover in governments and ministers, there are now well over 700 members of the body.

The Clerk of the Privy Council, Robin Tilbrook, announced in March that only 200 “Right Honourables” would be invited to the Accession Council—all others would be refused entry. Senior politicians past and present were prioritised along with higher-ranking bishops, with a certain number filled by an annual ballot of the remaining members of the Council. This innovation had been proposed earlier but had been shot down by arch-traditionalist Jacob Rees-Mogg, who as Leader of the House of Commons was also assigned the customary role of Lord President of the Council. Alas, a government reshuffle moved Rees-Mogg to another role in February and his replacement clearly approved the change early on for it to be announced just a month later.

Modernists claim it would be inconvenient and time-consuming to invite every Privy Counsellor, but it is inconceivable that all 700 would actually turn up. The new setup means a Privy Counsellor who won the ballot (and therefore an invitation) might be abroad at the time of the Demise and unable to attend, while a Privy Counsellor just minutes away would not be allowed in. Any study of the State Apartments of St James’s would show a long series of interconnected rooms, through which the primary meeting could be relayed via television screens to assembled counsellors. Indeed there is some charm in the vision of the palace with its apartments, corridors, stairs and courtyards teeming with ancient statesmen to take part in acclaiming the new monarch. The modernisers also claimed there would be a threat to the elderly and infirm but, of all the possible deaths a man can have in this world, who would not envy the curiosity of being trampled by fellow Privy Counsellors upon the proclamation of a new sovereign?

As the Rt Hon Sir Edward Leigh MP (whose late father, Sir Neville, was clerk to the body from 1974 to 1984) pointed out, the move “risks reducing the Privy Council into a mere Disneyland showpiece, rather than a body that is central to the constitutional functioning of the United Kingdom”. It is yet another triumph of monotonous officialdom over a more flexible and creative mode of problem solving. It is the sort of thing thought up by University College London’s Constitution Unit — a body that, were I Home Secretary, I would be extremely tempted to have proscribed as a terrorist group seeking the overthrow of the state. Their 2018 report on the coronation, Inaugurating a New Reign, came up with several innovative ways of ruining an ancient rite.

Another innovation this time round was the event being televised. Viewers witnessed the Lord President of the Council, chosen just days ago with the appointment of the new government, announce the death of the Queen and the Clerk of the Privy Council (having communicated with the King beforehand) read aloud the Accession Proclamation with the name and style of the sovereign, Charles III. Having completed a few other acts of necessary business, the Council moved from the Banqueting Hall of St James’s to the Throne Room to await the monarch himself. Upon his entry, the first meeting of the Sovereign-in-Council commences. He swears an oath to uphold the position of the Church of Scotland, one of two signed parchment versions of which is transmitted to the Moderator of the General Assembly of the Scottish Kirk. After a few other duties—allowing existing seals to be retained by ministers and officials until new ones are created, issuing orders for the Accession to be proclaimed by Lord Mayors and Mayors, the High Sheriffs of counties, and the Lieutenant-Governors of the Isle of Man, Guernsey and Jersey—the meeting ends.

At the instructions of the Council, Garter Principal King of Arms—the chief herald of England—proceeds to the balcony of the Palace overlooking Friary Court and, announced by trumpeters, reads aloud the Accession Proclamation to the general public for the first time. Security measures, alas, meant that none of this could be actually be witnessed by members of the public physically present. All the same, a strong crowd gathered either end of the road that passes Friary Court hoping at least to hear, if not see, the new King’s reign proclaimed.

Having hurriedly thrown on mourning dress of grey pinstriped trousers, black waistcoat, black necktie and morning coat, I walked over to the Palace and joined a few friends to claim a spot in the crowd for this historic moment. By chance we stumbled across other friends and acquaintances (an Australian colonel in his fifties, a Ukrainian-descended Briton in her late twenties) as the crowed was swelled by those with similar intent. A Dutchman working in London chatted to a visiting Canadian (“So he is your King, too?”) and there was a heavy smattering of visiting tourists amidst the throng of Brits. Some tried to watch the broadcast of the event via their phones.

Eventually, Garter stepped onto the balcony and proclaimed, “Whereas it has pleased Almighty God to call to His Mercy” the late Queen (“of Blessed and Glorious Memory”) the Crown “is solely and rightfully come” to Prince Charles Philip Arthur George. In the name of the three estates (the Lord Spiritual, the Lords Temporal, and the Commons), together with other Privy Counsellors, representatives of the other realms and territories, Alderman and Citizens of London they “do now hereby with one voice and Consent of Tongue and Heart” acknowledge Charles the Third as “King, Head of the Commonwealth, Defender of the Faith”.

The American conservative commentator Helen Andrews wrote somewhere that all legitimacy is essentially magic. Standing there in a solemn crowd of many hundreds, responding to Garter’s reading of the proclamation with a hearty and united shout of “God save the King!” echoing down the streets of London, it was difficult not to feel the supernatural and preternatural magic of the monarchy.